Exploration, this school year’s on-campus art installation, features a theme as broad as its title. Much like the staggering complexity in a theme and variations piece by any of the great composers, these explorations lead to a beautifully diverse collection of works. Courtesy of StudioEleven, the thought-provoking art in this year’s exhibit ranges from the recognizable to the abstract, the beautiful to the existentially terrifying. The range of emotion displayed around this one theme is breathtaking. Displayed throughout Colburn’s campus, it leads to an artistic journey for students and visitors whether they are on campus for class, rehearsal, or a performance. 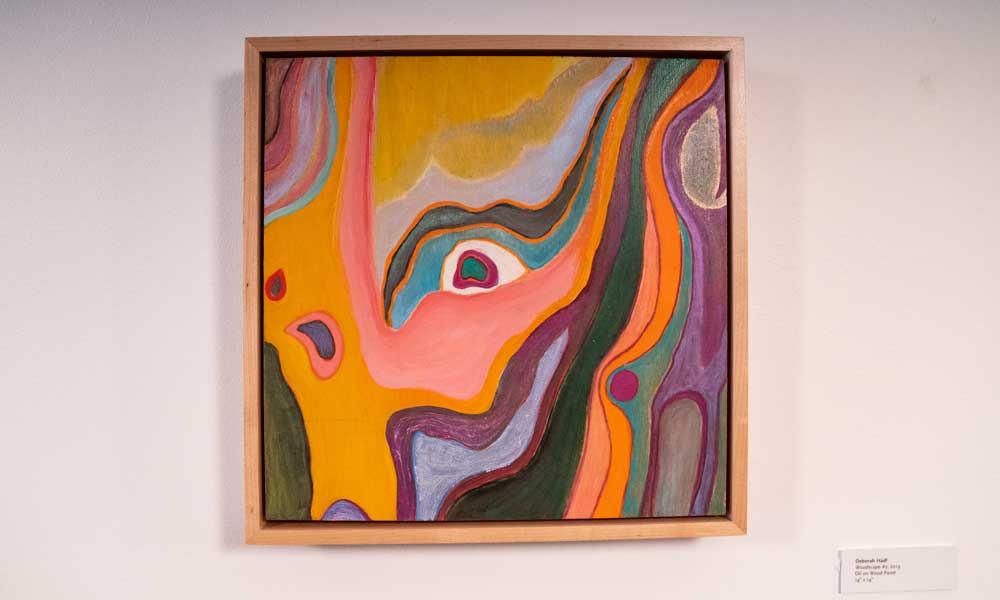 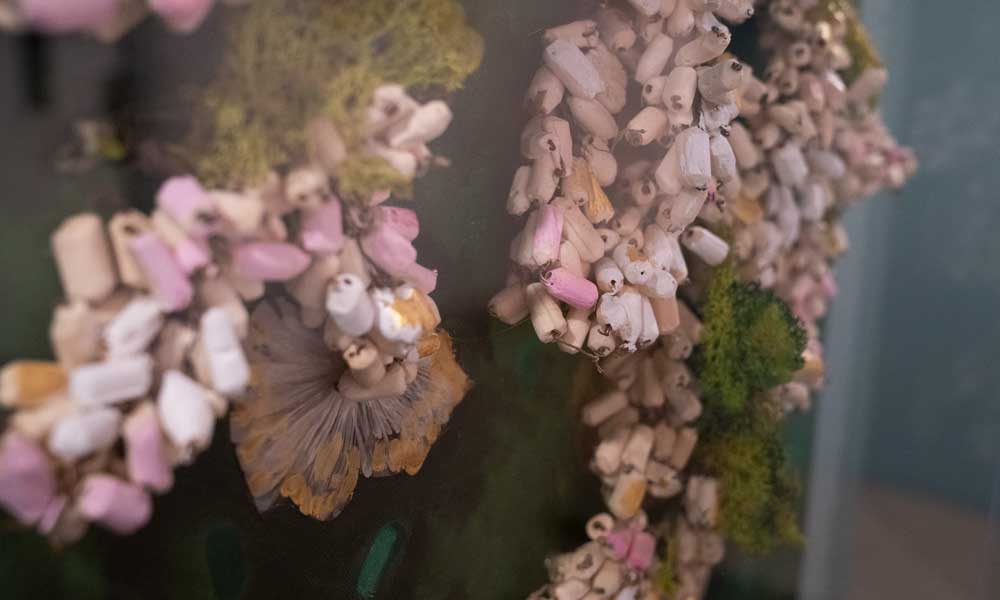 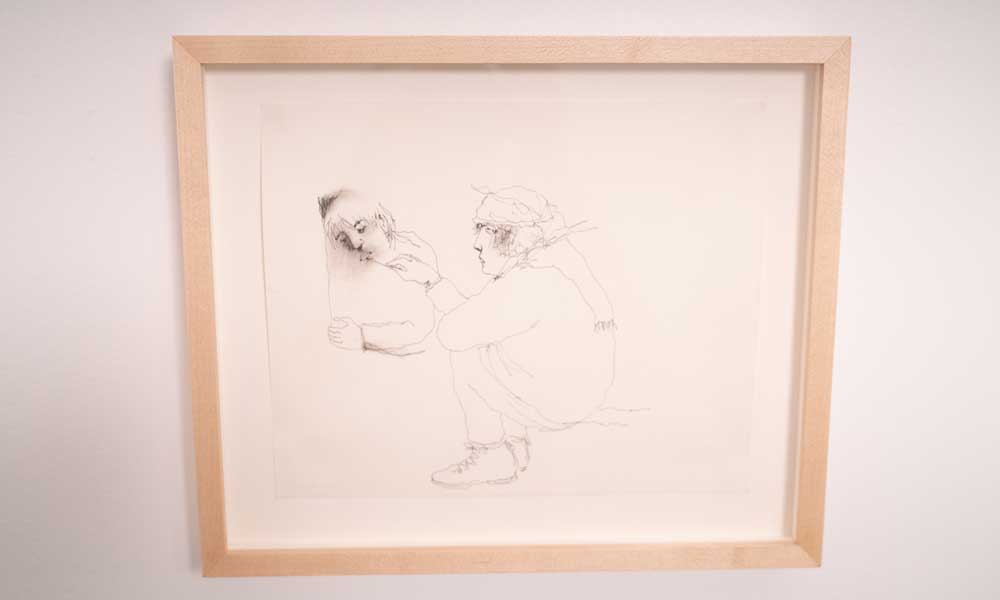 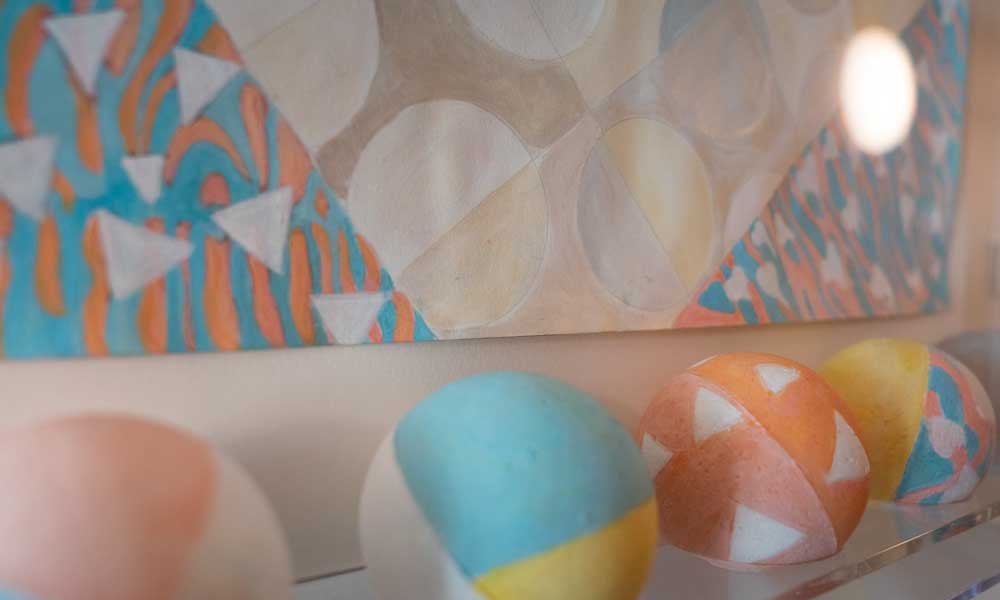 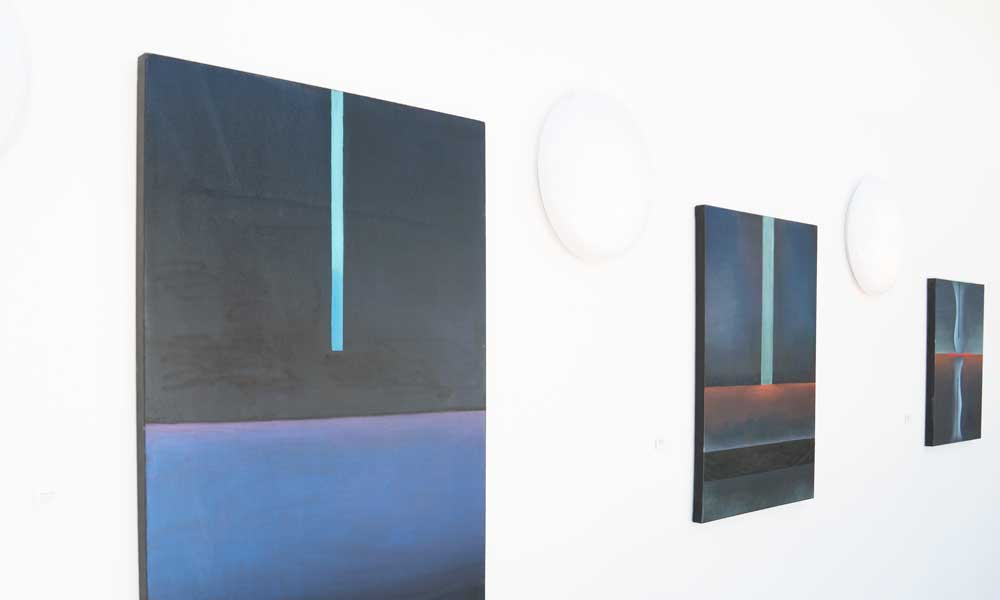 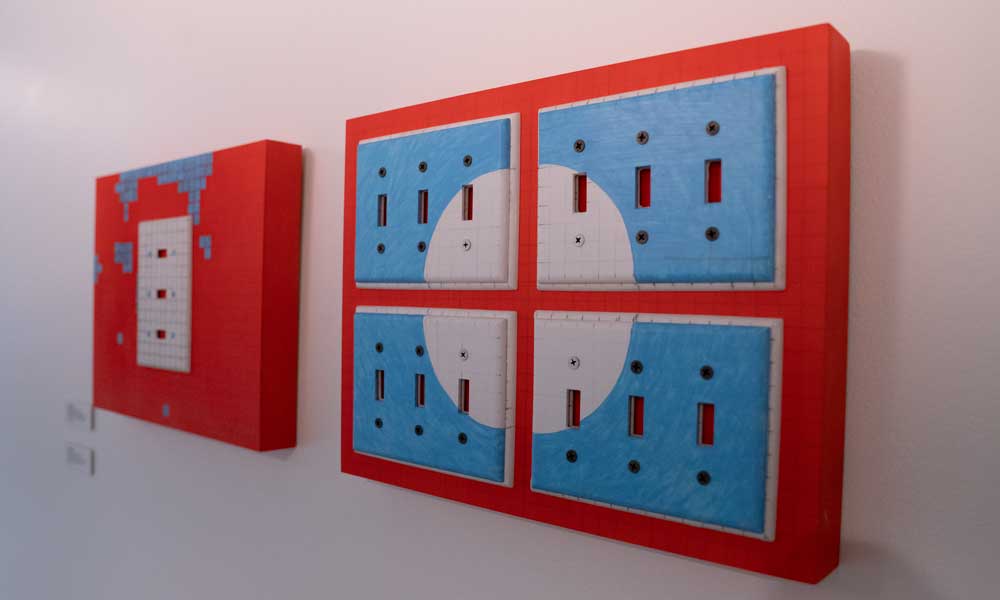 The 16 artists who curated the 60-piece exhibition at Colburn come from a wide range of backgrounds ranging from art school to psychotherapy. They include Mindy Alper, a mixed-media artist who was recently the subject of an Oscar-winning short documentary Heaven is a Traffic Jam on the 405, by Franz Stiefel.

StudioEleven is a group of 26 independent artists working and studying at Tom Wudl’s downtown LA studio. This is their third exhibition at Colburn over the last four years and it will be on exhibit through June 2020.

Colburn Café Offers a Taste of Home for Students

Ling Lee, the new general manager of the Colburn Café, has been working diligently over the past few months to serve our students, families, and guests high-quality, customized fare. We sat down with him to discuss his path to Colburn, creating a kitchen that feels like home for students, and where he might want to take the café in the future.

Where are you from, and how did you end up at Colburn?
I grew up in Taiwan. I left Taiwan was 15 years old and went to the UK for my A-level studies, and afterwards, since I love food and traveling, I went to Switzerland for my hospitality degree in Lausanne. After that, I wanted to come see the United States. I was on the East Coast in Massachusetts about 18 months and afterwards I came to LA for a few years and then went back to school in New York for my master’s degree in hospitality.

So I’ve always been very hospitality-centric. When I came back, I was working for Wokcano Restaurant Group, and then afterwards was in Marina Del Rey at an American restaurant with a bigger wine list. I’m a sommelier, so I wanted to get involved with wines and stuff like that.

Afterwards, I opened Herringbone in Santa Monica for Chef Brian Malarkey. However, it didn’t really work out, so I came back to the team and that’s how I got in touch with the business and industry side. I never knew this kind of restaurant style and operation existed before.

How has it been getting to know the Colburn community?
My first impression that is that the students here are very, very nice. The students are very courteous, very driven. You can see that they have goals, it’s not like people are just wandering around, hanging out. These people are serious about their music, their career, and their passion, so the whole environment just feels like it’s very different.

How do you cater to the community’s diverse needs and requests?
I want to be able to help to create a menu that is accommodating and fits all different dietary restrictions. I’ve only been here for like six weeks, so I’m still building momentum. Eventually I want to know all the students by their names, at least before they graduate. I want to recognize them and know their preferences—just like a restaurant, when you’re a regular and people already know you.

There’s one student from Shanghai, he always likes to grab salad and then have it sautéed. That’s very similar to my culture. I never saw raw salads when I grew up, so I totally get what he’s trying to do. That is what we try to create, that bonding.

I would say from observation, maybe 60 percent of people are not from LA. They could be from the East Coast, maybe 30 percent from all over the world. So this is still a foreign country for them, and food is such an important element to make them feel good. It’s kind of lonely, very stressful. We want to make the café more approachable so they feel like, okay I can come in here anytime, I can talk to Ling if I have some kind of new idea, like I tried Hawaiian barbecue from a food truck or some Taiwanese popcorn chicken.

The other day, one of the students told me about a beef dish, like shredded beef with beans and rice, that he wanted to put on the menu. So we spoke to the chef and we changed the menu right away. That is something that we would like to continue to reinforce, so that students, especially students living upstairs, feel like this is their kitchen. We want them to feel like they can come anytime and feel comfortable, order whatever they want, and we’ll make it however they like. This is theirs, so we’re here to support that.

What are some ideas you have in the future for the Café?
As of right now, what I’m focusing on is establishing consistency. Consistency is why there are so many Starbucks and McDonald’s. You cannot change the recipes. So it doesn’t matter where you go, it’s always the same.

So we have to reach that point of consistency, then we can do the fun stuff. We can have the chef from a local restaurant. I’m pretty sure there will be a lot of big chefs coming from maybe Water Grill, or some of the really niche restaurants in West Hollywood. I used to work at Sushi Roku—we can do teppanyaki in the back, or even a do a little farmer’s market. We can invite a couple fruit and vegetable vendors to come here and do displays. The main focus is more for the students, but I think there are a lot of opportunities to work with the local community.

The Colburn Café is open to the public seven days a week. Located in the Colburn School plaza off Grand Avenue, the café offers a wide variety of seasonal fare. Learn more about the Colburn Café.

I’m thrilled that this expansion will help the Colburn School bring music and dance more deeply into the lives of thousands of students of all ages and will welcome all members of the public. Carol Colburn Grigor

An exciting new stage in the growth of the Colburn School and the entire Downtown Los Angeles cultural community has begun, with the announcement that Frank Gehry will design a major campus expansion adjacent to the School’s current site. This ambitious project, together with Walt Disney Concert Hall and The Music Center, the Museum of Contemporary Art and The Broad, will make this area of Downtown one of the largest concentrations of performing- and visual-arts organizations in the world, a true cultural hub for all of Los Angeles.

Located along Second Street on a parcel of land acquired in 2016, Colburn’s campus expansion will include state-of-the-art performance venues—a 1,100-seat concert hall, a 700-seat studio theater, and a 100-seat cabaret-style space—that will give Colburn its first hall for full-size orchestra performances, a venue for its burgeoning dance program and for opera, and a range of options to meet the demand of partner institutions and community stakeholders. The expansion will also include much-needed classroom, rehearsal, and housing spaces for the growing Colburn community.

The Colburn School selected Gehry for his deep connection to the city of Los Angeles, particularly downtown, and his record of accomplishment of creating remarkable performance spaces and educational institutions. President and CEO Sel Kardan says, “In selecting Frank Gehry for this ambitious project, we have chosen an architect with an extraordinary track record of designing educational and performance spaces, an unshakeable sense of public purpose, deep roots in Los Angeles, and a commitment to the young people of this region and young artists around the world.”

Joining Gehry will be an all-star, all-LA team that includes Yasuhisa Toyota of Nagata Acoustics, the acoustician for Walt Disney Concert Hall, and Michael Ferguson of TheatreDNA, who, as a member of Theatre Projects, consulted on Gehry’s New World Center in Miami. 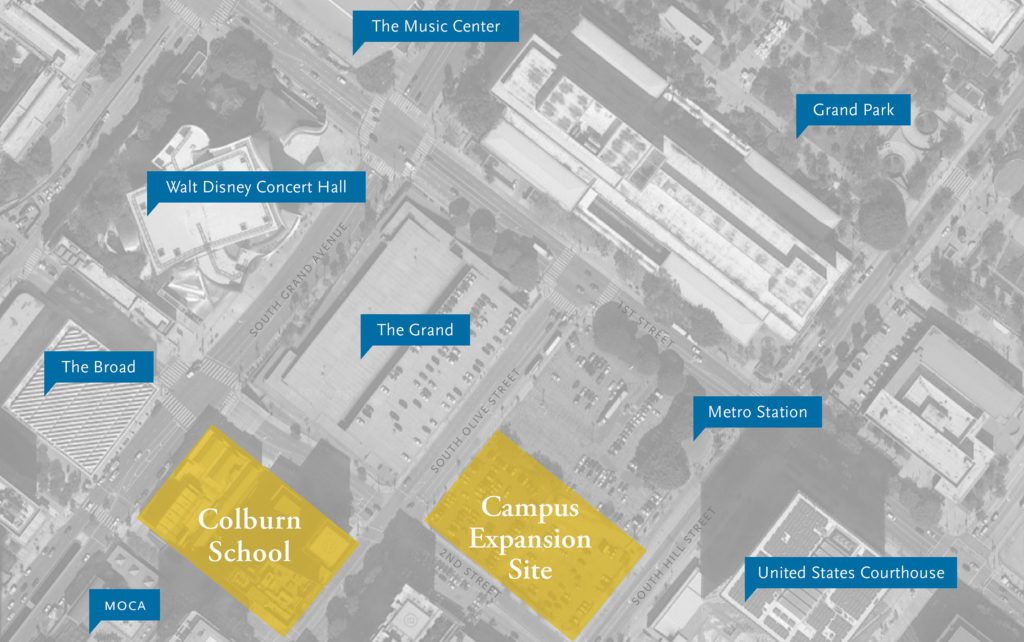 In a statement, Carol Colburn Grigor emphasized that this is a historical moment for the school, saying “Music runs in our family, passed down to us from our father. I’m thrilled that this expansion will help the Colburn School bring music and dance more deeply into the lives of thousands of students of all ages and will welcome all members of the public. Walt Disney Concert Hall is one of the most breathtaking buildings ever created for music performance, so I know that Frank Gehry is the perfect architect to design our expansion.”

The Colburn School moved to its home at 200 South Grand Avenue in 1998, when Grand Avenue between the Dorothy Chandler Pavilion at First Street and the Museum of Contemporary Art (MOCA) at Third Street was parking lots and undeveloped land. In 2007, Colburn expanded, opening the adjoining Olive Street building, with new rehearsal, performing, and living spaces.

Colburn’s investment in downtown paid off, and it now sits in the middle of a vibrant cultural corridor. Today, students play alongside members of the Los Angeles Philharmonic, dance in The Music Center’s Nutcracker, ponder art with educators at MOCA, and visit The Broad between classes.

The expansion of the Colburn School will foment Gehry’s impact on the area, living aside his other high-profile projects: the celebrated Walt Disney Concert Hall and his mixed-use Grand Avenue Project that he is designing for the Related Companies. His team will now begin the concept design phase of Colburn’s expansion, the next cultural jewel for Los Angeles.

If you are a member of the media and wish to download the press release and high-resolution images visit the press section of our website. 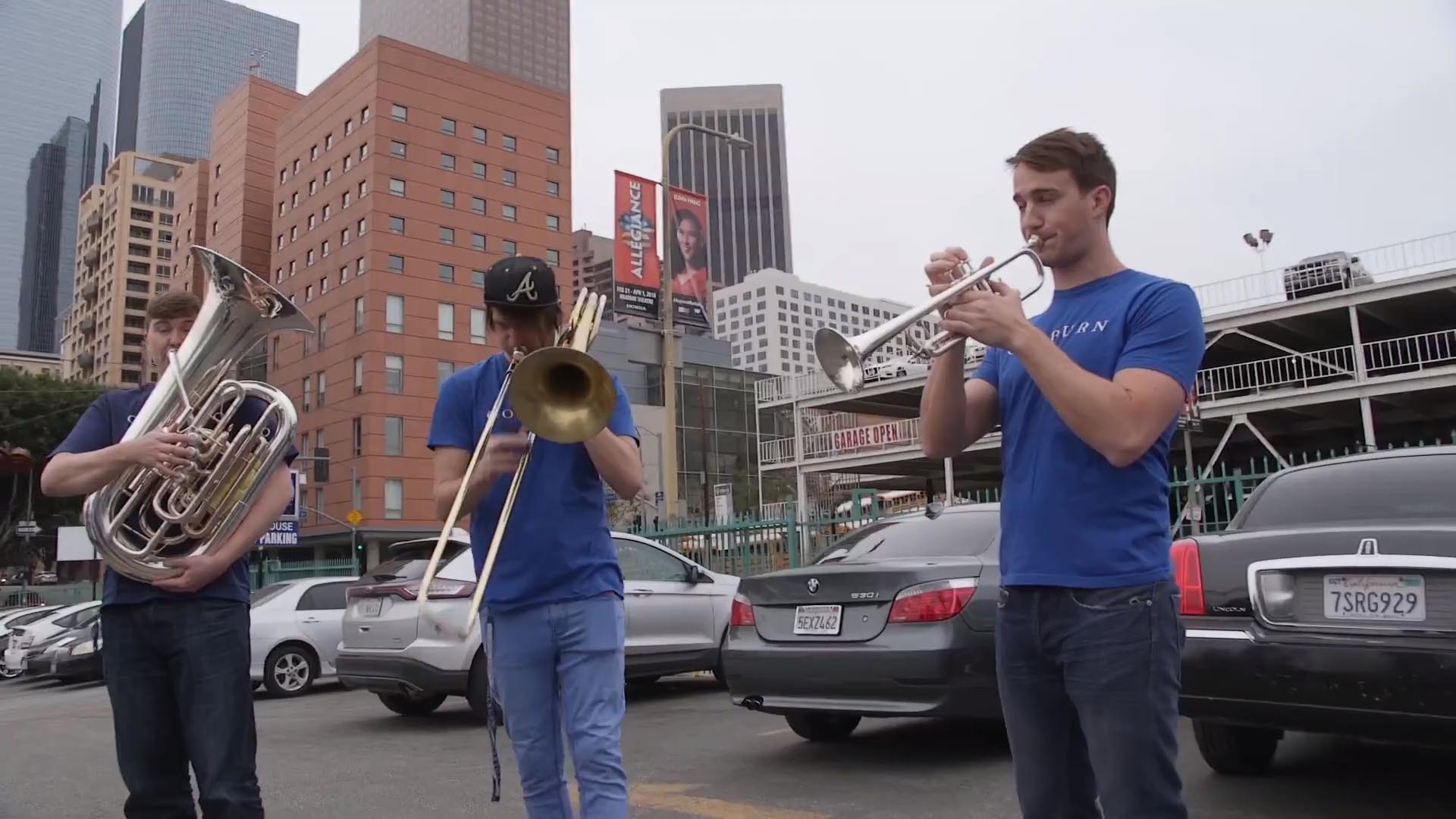 The Colburn School is Expanding