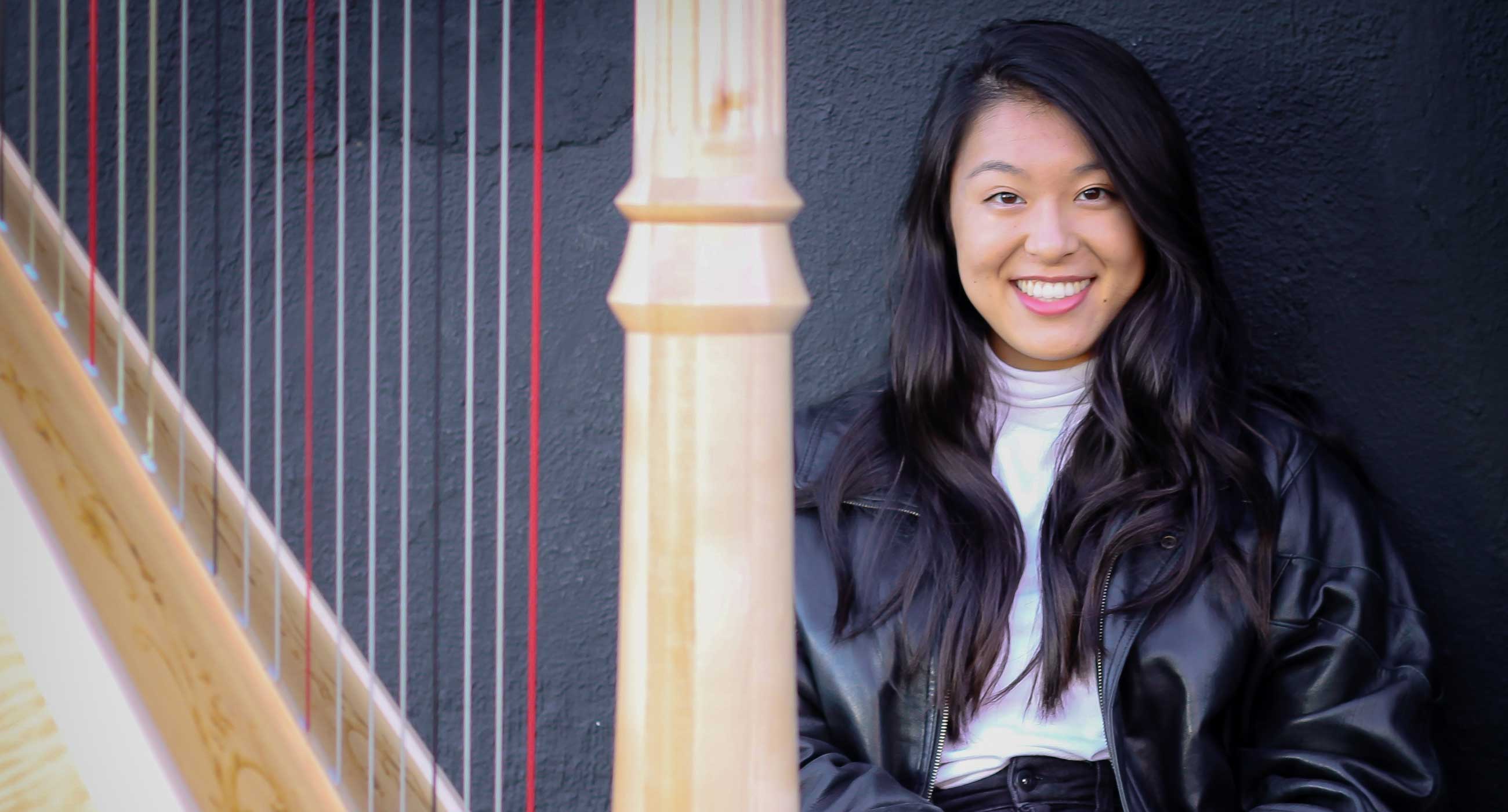 Alyssa Katahara, 23, is a first year master’s student studying with JoAnn Turovsky. She has been at Colburn for five years, having also received her Bachelor of Music degree from the Colburn Conservatory.

This interview has been lightly edited for content, style, and clarity.

Tell me a little about your musical background.
I started on violin when I was two years old because my mom plays the violin. She also played the harp and I always thought it was really beautiful and majestic. When I was really little, I used to watch her practice and sit at the base of the harp and try and play with her. I would beg her to play the harp, and when I turned six, she was finally like okay, you’re big enough. My chubby baby arms had become long enough to reach around the instrument, so I started playing the harp and have been plucking away since.

I guess it’s one of those instruments where once you start, you’re there.
It’s true. For me, it was just something I was so entranced by. Even now, the unique possibilities the instrument holds still surprises me.

What are some of the questions you get asked most as a harpist?
How do you transport the instrument? Can you put it on a plane? What are the pedals? What are the red strings? Mainly transporting things and brands of harp, if they’re getting fancy.

Do you think that the harp community in Los Angeles is bigger than other places, or is it about the average size that a harp community usually is?
It sometimes feels like there tend to be more harpists on the East Coast because everything is so densely packed, but really, I think it’s thriving here! It’s cool that because there are fewer [here], there’s more opportunities for people.

There are also so many different musical vibes around here, so it’s awesome to see what other harpists are doing to make their voice heard in this community. I think [the diversity] is quite fascinating.

It’s inspiring to me because I’ve always been on the one track classical music train but I’ve always been really interested in the groove of other music. I’ve just never gotten a chance or felt free to really explore that, so being here in a city which is so saturated and encourages innovation and individuality has been really valuable for me.

Are you focusing on the classical track at school and then branching out on your own or are you integrating that in your lessons?
I’m on the classical track in my private lessons, and this school has really encouraged that path. On my own, I’ve just started to try and branch out into the electrical. I got a loop machine for Christmas, which is really exciting! It’s kind of become my treat to myself; when I’m done practicing, I get to doodle around. I think it’s really helpful for us as classical musicians to explore other genres because it brings more depth and color to our classical music playing.

Do you write your own pieces with the looper?
Yeah, I do! I love improvising. It’s been a great creative outlet for me and I’ve always been annoyed by the limitations of having only eight fingers to pluck with—you have to have the harmony [on the bottom] and the melody on top, but I want the texture to be wider. I want to create a harp orchestra sound!

Also, it’s nice to not be confined to notes on a page sometimes. So often playing music becomes about playing the right things in the right way, and improvising, for me, is freedom from that.

Besides your own improvisation, what is your favorite thing to play?
I enjoy any music that allows me to collaborate with other musicians, especially because harp is such a lonely instrument. Even in orchestra, we’re often by ourselves. So much of what brings me joy is the process of creating art with others, sharing ideas and having a musical conversation with people other than myself. I know so little and other musicians are such a treasure chest of creativity and knowledge, so I love being able to bask in other musicians’ brilliance.

Would you say that the harp community skews more towards orchestral and solo playing?
I think that tends to be what people think they have to do. I am definitely in that boat and have been for a long time. I’ve just been working towards it for so long that now that I’m here it’s kind of scary because it’s all become more real—beginning the audition process, having to figure out how to navigate it without becoming disheartened, and really coming to terms with the fact that maybe winning an audition isn’t necessarily in my future.

Every audition is anyone’s game, and it has been good for me to realize that I do not absolutely have to win an audition to make music. Of course, it would be ideal, but I think like I said before, LA is a good place to inspire you to really try and explore other avenues of music.

What made you decide to go to Colburn and what made you decide to stay?
I didn’t imagine I would get in or that I would end up on the West Coast because I’ve been raised on the East Coast—I moved around a lot but my family’s on the East Coast now [in Northern Virginia]. In deciding to come to Colburn as an undergrad, I was interested in there being only two harpists here. I would get a lot more opportunity in orchestra and attention from my teacher, JoAnn Turovsky.

She’s a wonderful teacher and has turned out to be an incredible mentor and supporter, so that’s what prompted me to stay here for my master’s. She has been so supportive and really an advocate for me every step of the way, and tries to help me figure out how to integrate myself into the LA music community.

It’s nice to know there’s someone there who can help me navigate the waters because I feel like the gigging scene is really hard to jump into… it’s a wonderfully tight knit community, and you have to figure out how to wiggle your way into it. I would really love to figure out a way of making a living in LA and I think that it made sense to try to start doing that as a master’s student while I have some stability.

As an undergrad, I was continuously shook by the level of musicianship and discovered that I could learn an infinite amount from my peers. They are just all so crazy good, every single person here has so much musical gold to offer this world! Just sitting in Performance Forum—you learn so much in that hour. Even though I don’t have a huge studio of harpists here, I’ve found I can glean so much inspiration from the other musicians here, and I can’t believe I am surrounded by such a wealth of young talent.

What’s it like studying with JoAnn?
She’s so kind and supportive! It’s so good and I am so grateful for and to her! She’s a harp mom, you know? I have heard a lot of stories from kids with really intense and unpredictable teachers and that really works for some people, but she’s really supportive and I think that’s one of her greatest traits—always being present for us, wanting us to really succeed, being encouraging, and building us up all the time.

Do you study French or American technique?
[JoAnn teaches with the French technique], but she’s open to pretty much anything, so I don’t really have any particular technique. Because I’ve moved so much, I’ve picked things up along the way and now I’m this really weird conglomeration of things, which has been really good for me because it’s allowed me to explore for myself what works best. I’ve had pain when playing, so it’s forced me to be like, okay, what does my hand need to be doing to work with the most ease.

What music inspires you the most?
I listen to such a wide range of music! I’ve been trying to do that because I think by doing that I’m able to take pieces from each genre and bring it into my own music. There’s nothing in particular that I always gravitate to.

I have a desire to eventually be able to listen to jazz music, understand it, and then bring it back to the harp, but my brain’s small and it’s hard! [laughs] Jazz musicians to me are inspiring because they’ve found a way of making music playing so intellectual while being really fun, spontaneous, interactive and accessible.

I often don’t feel spontaneous, but the times I have enjoyed performing the most have been when I just try to remember the fun parts of music making.

How do you think that Colburn specifically is preparing you for life after school?
My freshman year was made up of nine people, so the rest of the school was obviously a lot older than me. Most people were master’s, Artist Diploma, and [Professional Studies Certificate] students. It has been interesting to see the freshman classes grow in size every year. Being surrounded by so many people four years older than me forced me to step up so early on in life and has taught me how to just jump into the water and be confident.

It was difficult at times to feel like the expectation in level of playing was so high and that I was worlds away from reaching it, but I had to realize that I was going to be okay and that it was achievable. Being around upperclassmen primarily has continuously challenged me to strive for more and desire more from myself. Gotta up that level you know.

I think because there’s only two harpists, we’re also given a lot of independence. JoAnn is great in allowing us to create our own plan. I think while I’ve been here I’ve really learned how to stay organized create my own goals and stay on track to achieve those goals. I think it’s going to really help me when I am out of school and have no structure.

Do you have any upcoming projects that you’re especially jazzed about?
Everything has been so… excerpt-y. I’m excited to just not play excerpts! [laughs] Right now I’m playing with LA Opera in Eurydice with a USC harpist. I feel thankful to be doing the thing that I’ve been working toward all my life and to be surrounded by professionals. We are premiering the opera, and it feels so special to be a part of creating something that has never been heard before.

[Composer] Matthew Aucoin is conducting and said he had never heard the piece outside of his head, not even in midi form. He said he writes his creations on paper. Straight from his head to the page! Like wow, imagine having a brain like that! How does he hear so many things all at once? I’m just so thrilled to be participating in it.

Finally, what have you been listening to recently?
Oh my goodness, it’s very silly—I’ve been listening to Dance Monkey so much. It’s such a good vibe and I just feel so groovy when I listen to it. If you see me around Colburn, that is probably what is goobing around in my brain. 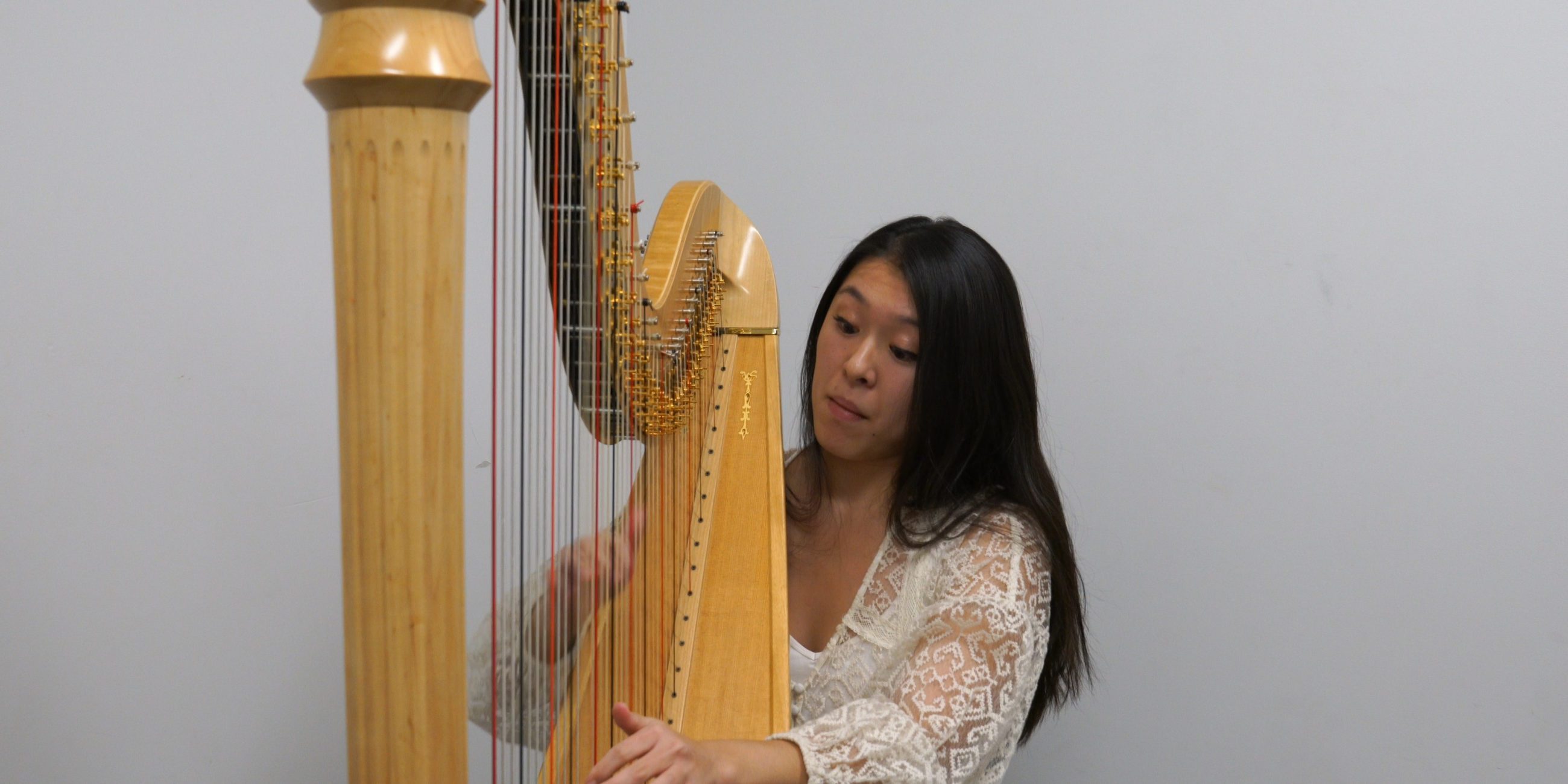