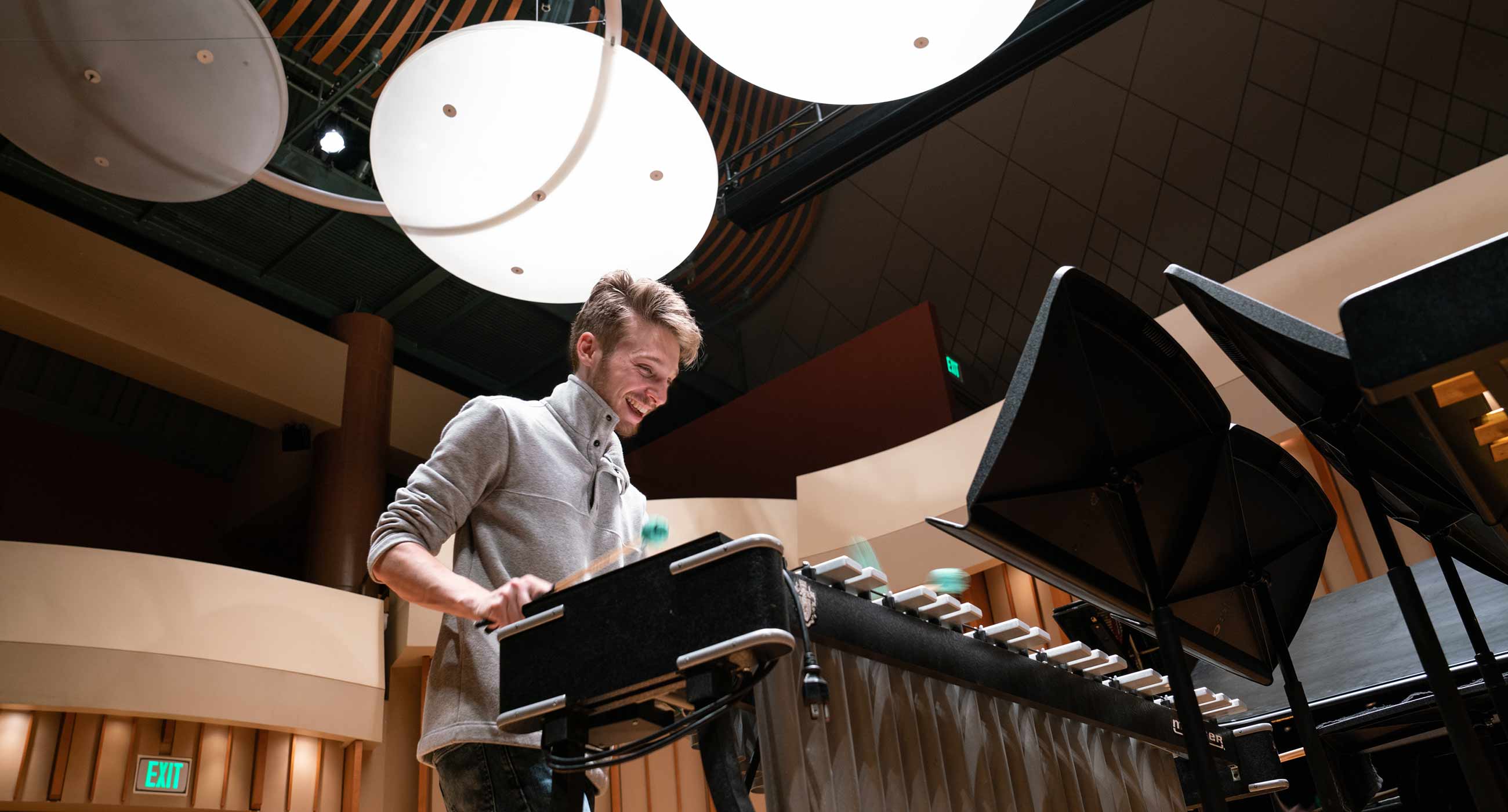 Gregory LaRosa, 24, studies percussion with Ted Atkatz. Originally from Downingtown, Pennsylvania, he will be graduating with his master’s this May.

How’d you end up at Colburn?
I came specifically for the teacher, Ted. I really admired his path. He had a job and he decided that he liked to explore other options, and I’m kind of in that same boat. He had a lot of insights into the less-trodden path of the music industry.

What kind of path is that?
Right now I’m pursuing the orchestral path, but before this, I did some work as an intern in the pop management industry—the for-profit side of things, learning what production is all about, and just sort of the business side of things.

How has Colburn been so far?
It’s good. I really appreciate the small nature and intimacy of the student body. I get to play alongside people who I know on a deeper level, and I interact with on a daily basis. We have a very different rapport and I think that’s something I’ll never have, probably, after this. I don’t think I’m going to live with 100 music friends again.

You never know.
Yeah. I could end up in a commune, a musical commune.

What are some things that you’re involved with here?
I teach in the Jumpstart program. I teach a studio of about six, sometimes 11, students. It’s really interesting to teach a group of students who are not necessarily motivated for the same goals that I personally am motivated for.

I know that they’re not coming to take lessons with me so that they can become professional musicians or the next drummer in whoever the pop band is that they listen to. And that informs a lot about the way I interact with my own teacher and think about the lessons that I’m taught. I think I learn almost as much from them as I try to teach them.

What has your most memorable experience here been?
I think my most memorable Colburn-associated memory is the tour that we went on. Working with [Stéphane] Denève was maybe one of the most insightful artistic experiences. He kind of encapsulates everything artistic, both musically and just sort of holistically. Getting to work and travel with him and just be in the same group for a long period of time, with him and everybody else who was soaking up this experience, was unforgettable.

How is being a percussionist at Colburn is different from other instrumentalists?
There are a lot of responsibilities as a percussionist here specifically. Because the school is so small and the studio is so small, everything, for the most part that we do, is very in-house. Whether it’s fixing instruments or handling needs for different ensembles or coordinating rentals with outside organizations, even interfacing with production and various departments in the school.

I think we get to interact with the administration of the school on a very different level than just a student who is involved in any other instrument or division. It gives us an opportunity to do a lot more hands-on on things that are really important that we might not have gotten experience doing otherwise.

What’s it like playing with the Colburn Contemporary Ensemble?
It’s a great experience to do things that aren’t often in the Colburn wheelhouse. It’s the time that contemporary music can shine and it’s a great outlet for that. And it sometimes feels like one of the singular moments that we get to do that, which is really fun and exciting.

Percussion tends to take a bit of a lead in that, partially because Ted is the conductor and programmer of that. But also because there’s a push in the percussion department to play a lot of pieces that we’ve wanted to play and that’s our outlet to do it. That’s our version of chamber music, so we take it pretty seriously.

Why do you play percussion?
There’s a level of instant gratification with percussion in the way that you might spend several months when you’re learning how to play a brass instrument just learning how to make a sound, whereas your first drum lesson, there’s this magic of going from never holding a drumstick to being able to play the drums. And I think that instantaneous gratification is what sparked my interest in it.

Since then, I’ve learned to love a lot of different parts of percussion, but I think the thing that always gets me excited and gets me motivated when I take breaks is just the diversity of it. I can spend eight hours a day practicing or playing in different groups and never play the same instrument for more than five minutes, 10 minutes, half hour. And that’s really cool. I like that idea of being a master of a section of instruments rather than just a singular one.

What’s coming up for you?
I have an audition next week, and a trial week with an orchestra for their timpani position in May. And a couple weeks after that, I head to Tanglewood for the summer. That is one of the bigger moments for me as a performer because that spark that I talked about with the instant gratification—the moment that that can be traced back to is my summers as a student at the high school version of BUTI.

And so I’ll be going back this summer as a fellow, six, seven years later, after kind of idolizing the idea of being a fellow there when I was in high school. And now I feel like I’ve achieved that to some degree. My 16-year-old self is probably very, very excited for me.

What are your interests outside music?
I am a huge fan of cooking, which has been a little bit difficult moving here. Yeah, I think if I didn’t go into music, I would have gone to culinary school.

Any signature dishes?
My family is very Italian, so there’s a lot of Italian, old, old Italian dishes in our blood back from, stretching back from Sicily. The homemade meat sauce that I learned when I was 12 years old from my dad, that’s probably one that I will hold with me forever and continue to prepare.

But since moving to LA, I’ve really gotten interested in cooking Korean and Thai food as well as Latin and Mexican foods, which are two cultures and two styles of food that I hadn’t really experienced to the same degree until I moved to LA.