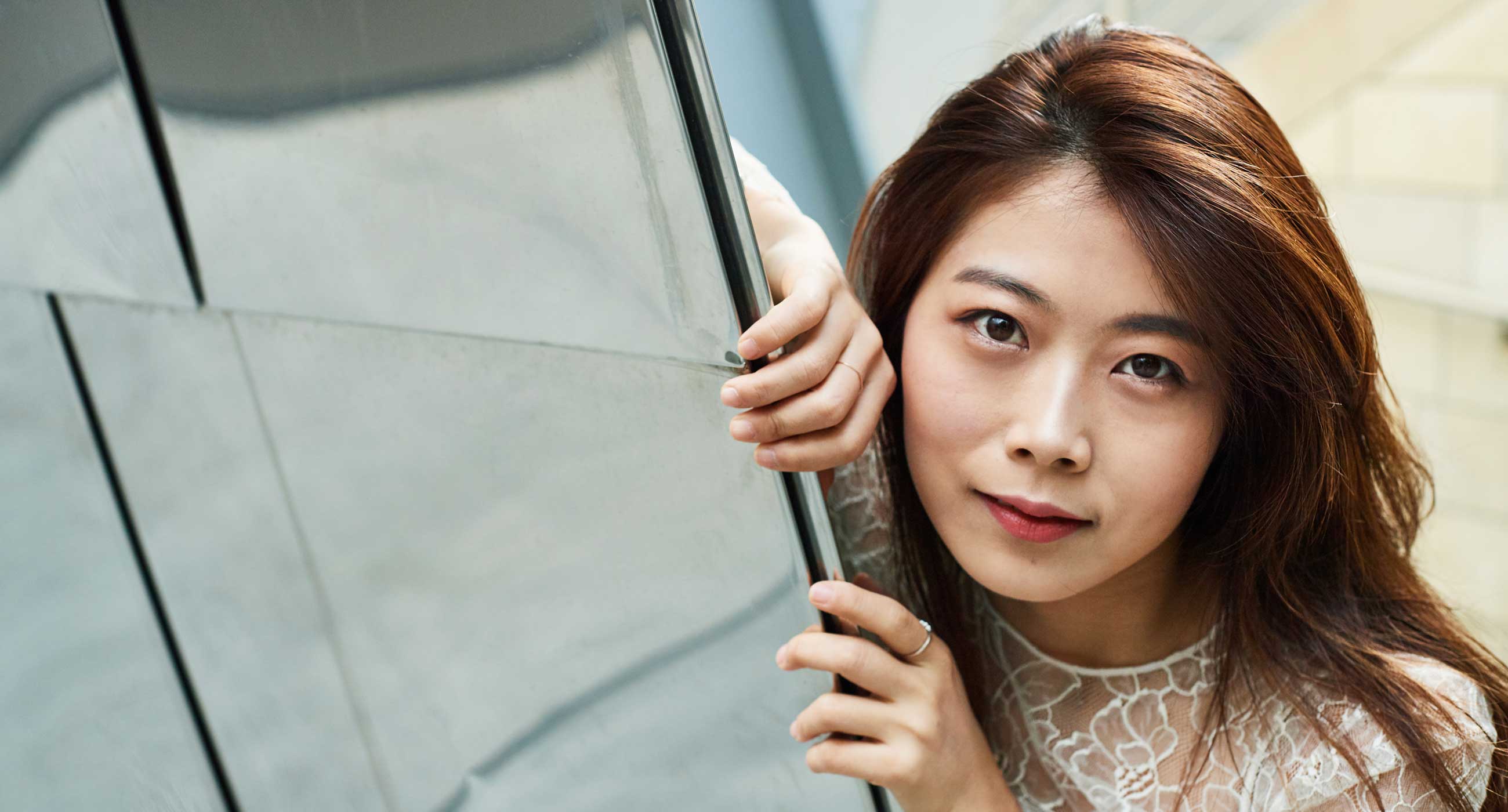 HyeJin Kim, 30, graduated this spring with her Artist Diploma after studying with Fabio Bidini at Colburn for three years. A native of Seoul, Korea, HyeJin attended the Yewon Arts School before earning her master’s degree at Berlin’s Hochschule für Musik Hanns Eisler.

This interview has been lightly edited for content, clarity, and length.

How did you begin playing piano?
I started at the age of six. That was first time I actually touched the keyboard. At the time, it was just a hobby, nothing special. But I definitely hated practicing. I hated practicing, but if people in elementary school asked me what my dream was, I always said, I want to be a pianist. And at the age of 11, when I was deciding where to go to middle school, my mom asked me if I wanted to audition for a special school for the arts where students prepare for a long-term career. I still remember what I said, which was: I know that I really hate the time when I’m practicing, but I still cannot imagine not playing piano for the rest of my life.

You have no idea how many times I was like, I should have said something differently. But now when I look back on those times, and of course so much happened from that time on, there were really happy moments, and there were so many difficult moments and obstacles. Now I can admit that what I decided was pretty much the best for me.

How did you decide to come to Colburn?
I have actually studied with Fabio for more than a decade, since I was 18 years old. At the time, I was finishing my Konzertexamen in Berlin, which is the highest degree you can earn in Germany. A few months before the very last graduation concert with the Konzerthaus orchestra, which was a really big deal, he told some of his students that he might go teach at Colburn, and if he went to LA, would they continue studying with him over there? I had known him and studied with him for many years, so I had no doubts about him.

So then I searched for information about the school, and it captivated my attention immediately. At the time, I had no idea what the environment was like, but it looked like such a different environment compared to what I was used to in Germany. After many years in Germany, I also needed to be in a different atmosphere that gave me more inspiration. So it happened, and fortunately for me, being at Colburn for the last three years and being a part of the Colburn community has been another stepping stone for me to step higher than what I’ve done before.

What’s the next step?
I will be sticking around in LA. This environment and everyone here helped me to become the real independent musician I am. I’ll be the resident pianist of Salastina [Music Society] from the next season on, so I’ll be playing on most of their concert series where they need a pianist. In June, I have another recital in Florida, and already two engagements with other orchestras. On top of that, I started teaching a few Academy students here last semester and I’m assuming that I’ll continue to do that. So many things are going on.

Until now, I was always part of a school, even in Berlin, and the school or teacher would always guide me and tell me what to do. They led me in the right direction. But now, everything is up to me. Now I have to choose the right direction by myself, and what I want to go for. I definitely love to make music and play concerts as I always have. On top of that, I’ve gotten so much from Colburn and my teacher, from anyone and any experiences that I had. I’ve gotten so much that I’ve put into my music, so now I think it’s really time for me to give back to the community. It can be with a concert, or my teaching. I just want to be a part of society.

You’ve played a lot of underrepresented and living composers with Salastina. Was that a different experience for you?
They’re trying to create really unique series. They are doing something really challenging and trying to see classical music from a different perspective. Here [at Colburn], we play classical composers in the canon like Beethoven, Schumann, Schubert, because this is a conservatory. They are essential in classical music, so that’s what we learn most of the time. It’s definitely worth it to learn the fundamentals like Bach and Beethoven. They’re like the columns of a house, where if you don’t have them, the house will fall down. We really need to know those certain composers really well, and then from there I think that we can expand our musical journey towards contemporary music or jazz or second-citizen composers.

When I played the last concert with Salastina, I had never heard some of the pieces. I knew they existed but I hadn’t played them.  Once I got to know the pieces, I realized they were actually really good composers, really extraordinary. I feel kind of sorry somehow that until now I hadn’t actually known about those pieces. That made me think that I really need to look into it, more than before. Certain composers need more exposure, definitely. But the range of repertoire is so big that sometimes we just go for what we’re used to. I need to be more awake and aware of them though.

How do you learn to play such an expansive range of repertoire?
Practice is really important for any musician, but besides physically playing pieces, I think all life experiences are really worth it to become wise and to become a musician who can bring out the character of a piece. Being in the practice room for 24 hours doesn’t make much of a difference. Finger-wise, you might be able to play it perfectly. But for example, looking at the different colors of the sunset on the ocean, or when you see the Niagara Falls and think about how powerful nature is, or the interaction between friends and other people, the warmth that you feel in family, loving each other in relationships, it all comes through in your music. Working hard is important, but on top of that, all the little experiences that you go through reflect on your performance.

What has living in LA added to your experiences?
I definitely love the sunlight, especially when I came here for the first time. The very strong image I had of LA was the extremely bright sunlight, the positive energy that people give me, like the smiles on their faces, and the nature around LA. That made a very strong impression on me in the first year, especially because I came from a completely opposite environment where it was constantly raining, very gloomy, and people had no expression. I’m not speaking badly of Germany. Of course, I grew up a lot over there, especially in achieving a certain depth of music. The majority of composers were German, like Beethoven, Bach, Brahms, Mendelssohn, and Schumann. Literally everyone. I was kind of able to feel what they would have felt at the time.

Because of that time, I am able to enjoy LA so much afterwards, because what I like about LA the most is that I don’t need to be as careful as I was in Germany. I found that they are getting much, much better, but I still felt aware of being Asian there, and that I was a foreigner. There’s still a little racism here and there and it made me fearful to open myself up too much. So I was very cautious and careful about what to say, what not to say, and my behavior. It made me more introverted as a person. Here, the attitude is: be who you are, and we’ll love you in any case. That gives me the freedom that I didn’t really have, and that makes my music even freer.

What’s the most valuable thing you’ve taken from Colburn?
Oh, there’s so many. First of all, Colburn gave me the most opportunity to be on stage. Previous universities also gave me concerts, but they were just concerts and nothing happened afterwards. Here, even from just playing on [Performance] Forum in school, I meet new people that I am still connecting with, like donors, and outside people who are really interested in hearing music. They come to all of my concerts later on, and we have a really good relationship as friends. I’ve had more opportunities to be on stage at Colburn than what I could have done at other universities in 10 years.

Another thing is the environment, as you all know. It’s an incredible environment, especially for practicing. 24-hour practice rooms give me tranquility, which I never had before. At the time in Berlin, I needed to wait sometimes two or three hours to get a practice room, and the piano wasn’t even that good. That gives me the tranquility to spend my days in a way I want to. And definitely working with Mr. Bidini and all the other faculty, like Mr. Beaver and Mr. Greensmith, all the chamber music making, and all the opportunities to actually play with them. The value of that is something that I cannot express enough.