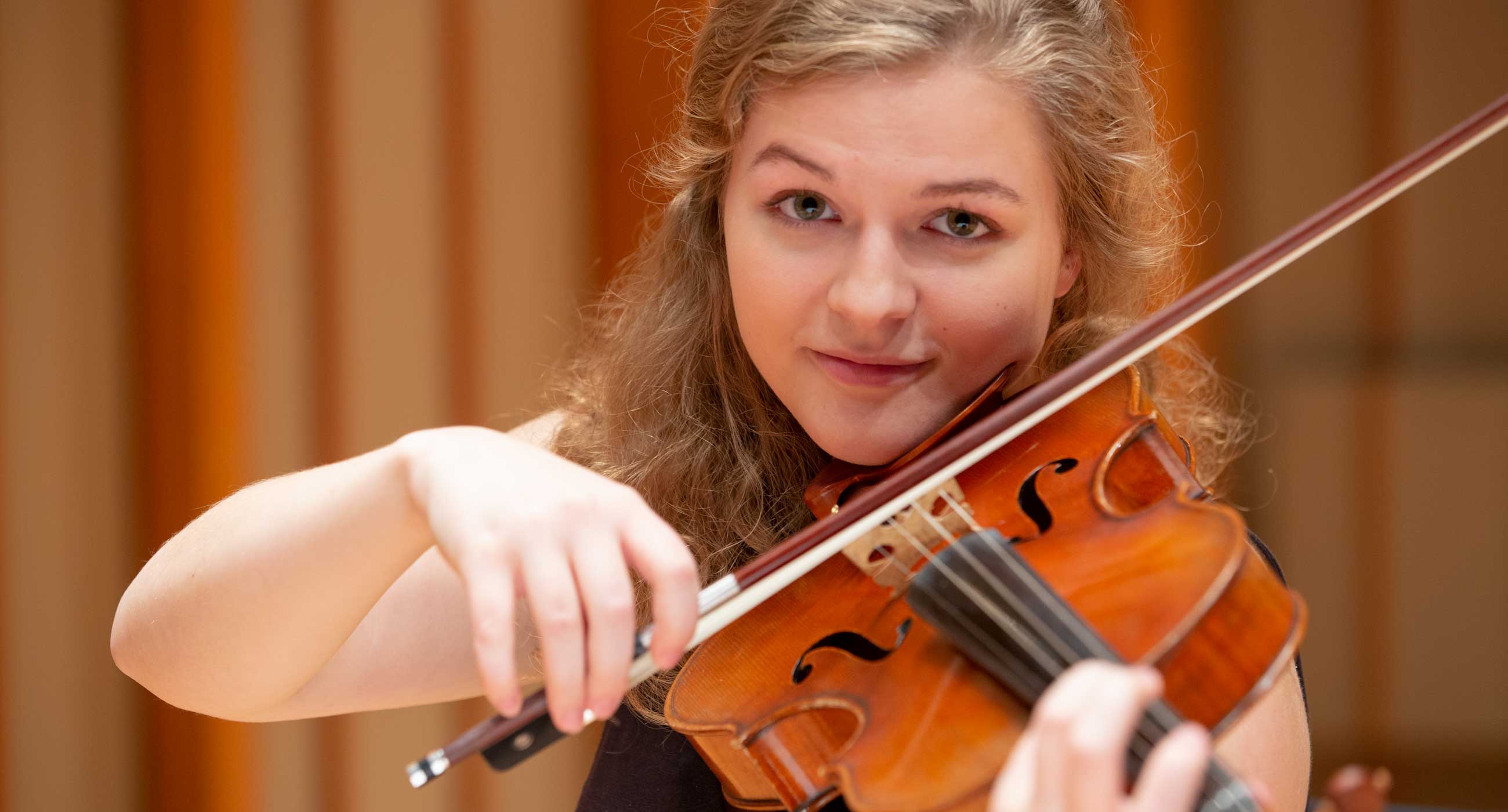 Johanna Nowik, 21, studies viola with Paul Coletti. She is from North Plainfield, New Jersey and is a senior in the Bachelor of Music program in the Conservatory.

How has your Colburn experience been?
It definitely took some time to get used to it. It’s nice that it’s a small environment and that you can get to know everyone. But at the same time, when I first got here, I had this feeling that I was under a lot of pressure, because I knew who everyone was and I knew everyone was doing so well.

I looked at myself as this outsider coming in who had no business being here, who wasn’t as talented as everyone else. I felt like I was just playing catch-up the whole first year.

But over the years, I’ve learned to embrace the fact that because we’re a small school, you are able to establish relationships better than you would at a bigger school. I found my place here, I think, and I learned to stop worrying so much about what other people thought about me or my playing.

I remember a lot of really positive studio classes, like the first time I ever played really well in a studio class, and my teacher was proud of me, and the studio was proud of me. Especially for my first year, since I was saying I was kind of insecure, that was a really rewarding first experience for me.

You play with the Music Academy’s conductorless Virtuosi Orchestra. What is that like?
I’m supposed to be the mentor, but I actually ended up learning a lot more than I expected going in. They teach me a lot of things too, and I learn so much from Margaret Batjer, who’s also the concertmaster [of LACO]. It’s really rewarding at the end of each semester to play the concerts and hear the improvement that they’ve made, starting from the first rehearsal until the end.

Another great thing about it is that there’s no conductor. So it really is true chamber music, but in an orchestra form. In this orchestra, I feel like it’s my one chance to really bridge the gap between chamber music and orchestra. The fact that I get to do so and help teach kids and help them become better musicians along the way is really, really rewarding.

I’ve also just learned to be a better listener, to really, really listen for things. I’ve also learned how to voice my opinions better. This year, I started having to think more about what I would say in rehearsals, because I started to do more of the teaching, and not just the playing part.

How did you get started playing the viola?
It’s actually a really interesting story. I played violin, Suzuki violin, for eight years. I realized that by the time I was 12 or 13, all my friends who played violin were getting much better than I was. I was kind of sitting towards the middle or the back of the first violin section in the orchestra at that point, and I had learned viola once just for fun. My conductor at the time came up to me. He says, you know what, we have like 30 violins in the orchestra right now, and we have three violas, and I really need you to play viola on the next concert.

I was devastated because my whole life growing up, I guess I had just accepted the stereotype that you know, violas are violas and they’re the subject of all jokes in the orchestra. I had this predefined notion that I was going to be a failure and I couldn’t make it as a violinist, so they were switching me over to the viola. But I agreed reluctantly. I went in to the first rehearsal and I was like, hey, the viola part is actually kind of nice to play. But I didn’t want to admit I was having fun.

The next week I came in, we had a sectional, and they brought in one of the members of the New Jersey Symphony Orchestra to coach the violas. He was correcting people’s technique as we were doing the repertoire and he ended up making changes to my technique so that within five minutes, I was playing better than I had played in eight years. It was at that moment I realized, I need to study with this guy. So I got in the car, I told my mom, and we called him the next day.

We got a lesson with him and I remember I came into my first lesson and of course, I was still feeling kind of hesitant about viola and I still had all these stereotypes about viola in my head. He asked me to play a scale, but my technique wasn’t fully developed yet, so I actually had no idea what I was doing on the upper register, especially on viola. He was like, let’s start from the beginning. From that lesson on, we just worked so carefully on building my technique literally from the bottom up, just pure basics as if I was a beginner again. I really started from nowhere in freshman year.

I think there couldn’t have been better timing to put all that focus onto the fundamentals, since I was at a time in my life where I was starting to think things over. Because of that, it made me learn to love the instrument. I realize that it’s actually so rewarding and so much fun and it has so many complex colors. So that’s my mission: to show the rest of the music world, specifically, that viola is a great instrument.