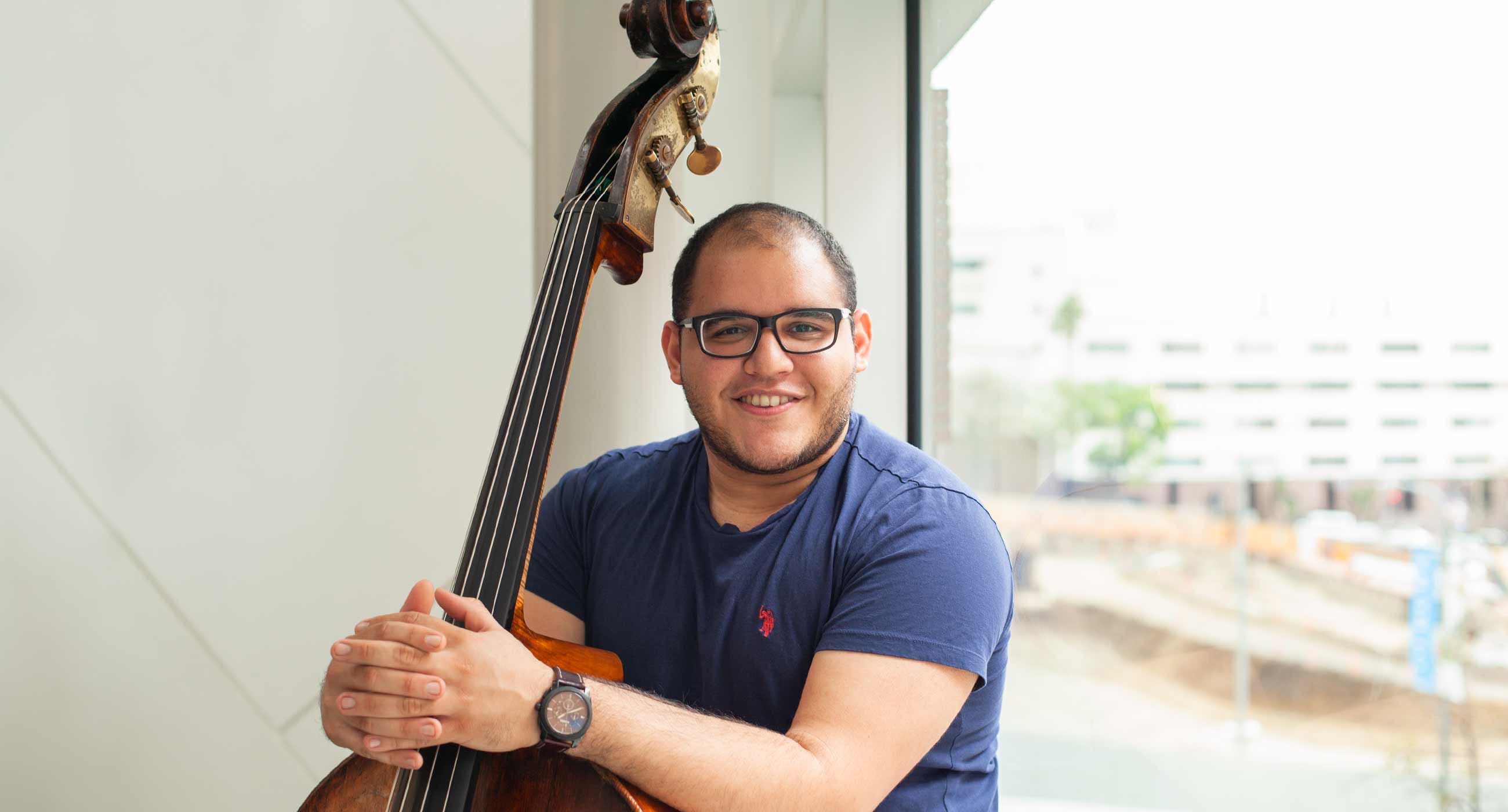 Luis Primera, 26, is originally from Valencia, Venezuela. This is his third year in the Performance Diploma program studying with Peter Lloyd.

What’s your musical background, and how did you end up at Colburn?
I started when I was 14 in El Sistema. I started the bass because the teacher who was showing the instrument in the conservatory didn’t want to give me the violin, because I have huge hands, so she told me, okay you will play the bass. The first time I played the bass, I fell in love.

El Sistema is my second family. I started to play in the orchestra in my city after five months of playing the instrument. And then I became a member of the Latin American Academy of Double Bass studying with my teacher Felix Peter who is my musical father. He has been my mentor since 2008. I started to play in the Simón Bolívar orchestra in 2010. We played one of my favorite pieces, Stravinsky’s Rite of Spring, in Caracas before starting a tour in Europe.

I met Peter here in 2012 and 2014 when I went to Los Angeles to play with the orchestra. In 2015, I saw Peter at a competition in Denver for the International Society of Bassists. He went with two students from Colburn, and he asked me, would you like to study at Colburn? So I came here the next year, and started to study with him in 2016.

You’re involved with the Jumpstart Young Musicians Program here. What do you do with them?
My main job here at Colburn is with Jumpstart. I started with them right away, like two months after I arrived here, because I speak Spanish. Jumpstart has a huge Hispanic community, so I started to help Nate Zeisler translate everything for parents.

I started to work with them because I love kids, and I think that’s the most important thing for all musicians, to help new musicians—the kids. So I’m with them all rehearsal for three or four days a week, trying to help them, taking attendance, being an advisor for them, and talking to parents. I’m in love with that program and the Center for Innovation with Jazmin and Nate. I have a lot of a responsibilities with them, but the main thing is Jumpstart.

My main dream when I’m like 40 or 50, is to have a music school and give free classes to the kids. I think that’s a strong reason I love being with Jumpstart here, because that’s the only program we have where we can be in touch with kids. When I go back to my country, I give lessons and classes all the time for free to them because I love to see children growing up.

You performed with the Fauré Quartett this week. How was that?
I was afraid for that, because they are one of the most famous piano quartets in Europe. They’ve had like, 25 years together. So it was a challenge for me in the beginning, but I felt so confident with them. They believed in me, and they didn’t know me.

It was many rehearsals, many hours practicing and traveling, because I went to San Diego. We had a four hour rehearsal on Monday, and we played the Trout Quintet that night. It was a huge concert, a really amazing concert. They invited me to sign CDs and programs as a member of the quartet. The next day we played in Orange County. They want to keep open the opportunity for me to play with them one more time.

How did you get that opportunity?
They requested a bass player and [Laura Liepins, Director of Artistic Administration] asked Peter Lloyd for one of his students, and Peter told me that I would be playing. It was a really important concert. So I accepted it last May or July to play with them.

Why was it an important concert?
It’s important because when you play with major, professional musicians, you will learn many things. It’s a challenge, and when I have a challenge in my life, it’s important. They make music at a high level, plus they are one of my favorite chamber groups in the world. It was a dream to play with them two major pieces for quintet, the [Schubert] Trout Quintet and Vaughan Williams [Quintet in C Minor].

What are some interests you have outside music?
I love to dance, that’s my hobby. I love to take advantage of the environment, go to hike a little bit or walk, to feel like I’m part of the world. I think the main thing is to help people. I don’t know if I can explain that but when I can talk with people, I will take my time to give to them, just to help them.