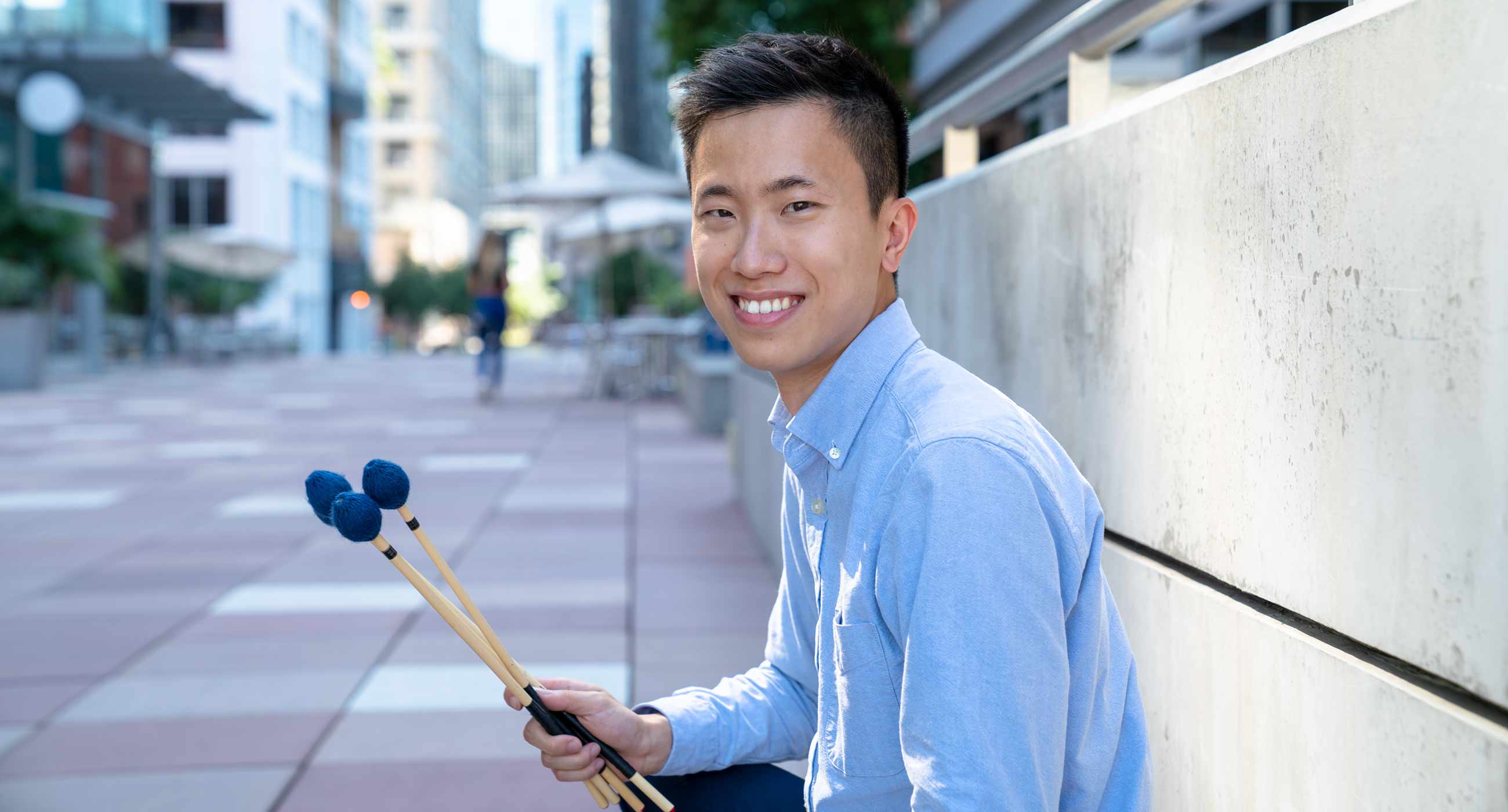 Tsz-Ho Samuel Chan, 26, is originally from Hong Kong. He is in his third year of the Conservatory’s Artist Diploma program studying percussion with Ted Atkatz.

This interview has been lightly edited for content, length, and clarity.

How did you get started playing percussion?
It’s actually a funny story because my parents signed me up for a percussion class at my primary school thinking they were signing me up for a piano class. The Chinese words for glockenspiel and piano are very similar; there’s just a one word difference. I don’t know why they called it a glockenspiel class.

They thought they were signing me up for piano, so when I went back, I told them, “Oh it’s so much fun playing the keyboard standing up,” and they were like, “You were playing piano standing up? Why?” Later, they finally realized they mixed up the two things, but that’s how I started and I kind of just kept studying until I was a teenager, when I became more serious about it.

Later I wanted to pursue this as my career, so I went to a conservatory in Hong Kong for two years, and after that my teacher back there suggested that I further my studies in the States, so that’s why I came to audition for schools here.

I did my undergraduate at New England Conservatory in Boston, my master’s at Juilliard, and after my master’s, I learned about the Artist Diploma program at Colburn. I really liked how much support the school offers to the students, how many different opportunities there are in the program, and how wonderful a teacher Ted is, so I auditioned for this program and I was lucky enough to get in.

How did you realize you wanted to study percussion as your career?
It was mostly my teacher I studied with as a teenager. She’s the percussionist in the Hong Kong Philharmonic, and getting to know her more as a person beyond the teacher level was really eye-opening, seeing what she does every day for a living, and life as a musician. I was thinking, yeah, I think that’s what I want to do with my life. So I tried to practice harder to really see if I could do this.

What parts of the lifestyle appealed to you?
The first is to really play music everyday as a living. Also, especially as a percussionist, the versatile nature of our instruments really allows us to play in various settings.

I mentioned that my old teacher is an orchestra player, but she is also one of the best teachers in Hong Kong, so at the same time, she’s nurturing all these different generations of percussionists and playing chamber music on the side with different musicians on different projects. She’s also a solo player. I think it’s really fun to do these different things on different percussion instruments, not just one thing. I think that’s what inspired me the most.

How do you balance all the different skills you need to have as a percussionist?
One of the most important abilities percussionists need is to be able to adapt to different things very quickly. The most obvious reason is that we’re playing so many different things. There are some primary instruments that we work on mostly, and the skills are transferrable, but oftentimes there’s unexpected stuff that we have to play.

For example, on a piece that I played earlier in the spring, I had to play stones, tear paper, and play Chinese cymbals, which I’ve never played, so I just had to adapt very quickly to whatever instruments came my way.

And at the same time, there are so many different styles of music we have to play, like orchestra percussion, chamber, percussion as a solo instrument, and those are really different skill sets. So for me, I go through different phases at different times of the year. If I have an orchestra audition coming up, then I have to switch to orchestra mode. Or if I’m playing a chamber concert coming up, I have to go to chamber mode. If I have some solo invitation, solo mode. But I definitely do try to schedule my time in each day so I do orchestra stuff in the morning and then something else in the afternoon, stuff like that.

What kind of genres do you enjoy playing the most?
That’s a hard question. Like I mentioned about my practice routine, I also go through different phases in terms of my favorite music. I certainly like most the music I’m playing at the time I’m playing it. This week, I’m playing a vibraphone solo at convocation, so right now that’s my favorite jam. Last week I was playing all French music with an orchestra in Malaysia, and I also enjoyed that a lot. I don’t have one favorite thing, but different things at different times.

Tell me about the piece you’re playing.
It’s got a very interesting title. It’s called “Hard-Boiled Capitalism and the Day Mr. Friedman Noticed Google Is a Verb” by Ben Wahlund. It was inspired by Milton Friedman’s book Capitalism and Freedom and another guy with the last name Friedman. The composer was reading two books by two different Friedmans when he was writing it, and he was thinking of the relationships between the two.

What do you want to do with your music in the future?
I want to be a well-rounded musician in my career, kind of like my teachers. I think that’s my dream goal, to be able to do everything at the same time.

So not one goal, but a thousand.
You’ll never get bored.

Do you have any time for hobbies or interests outside music?
Definitely. When I lived in Hong Kong, it was really convenient to eat out, and it’s also very cheap. I would say 50% of the population just eats out for every meal. When I moved to the States, the food is more expensive here, and it’s also harder to get Asian food, which I was really missing. So I picked up cooking and taught myself how to cook.

One of my hobbies during undergrad was watching a lot of recipe videos on YouTube and trying to replicate what I like. I’ve actually become, I wouldn’t say very good, but a decent cook since I moved to the States. That’s one thing I’m missing at Colburn. There’s no kitchen. But it’s fine, I cook when I go home. 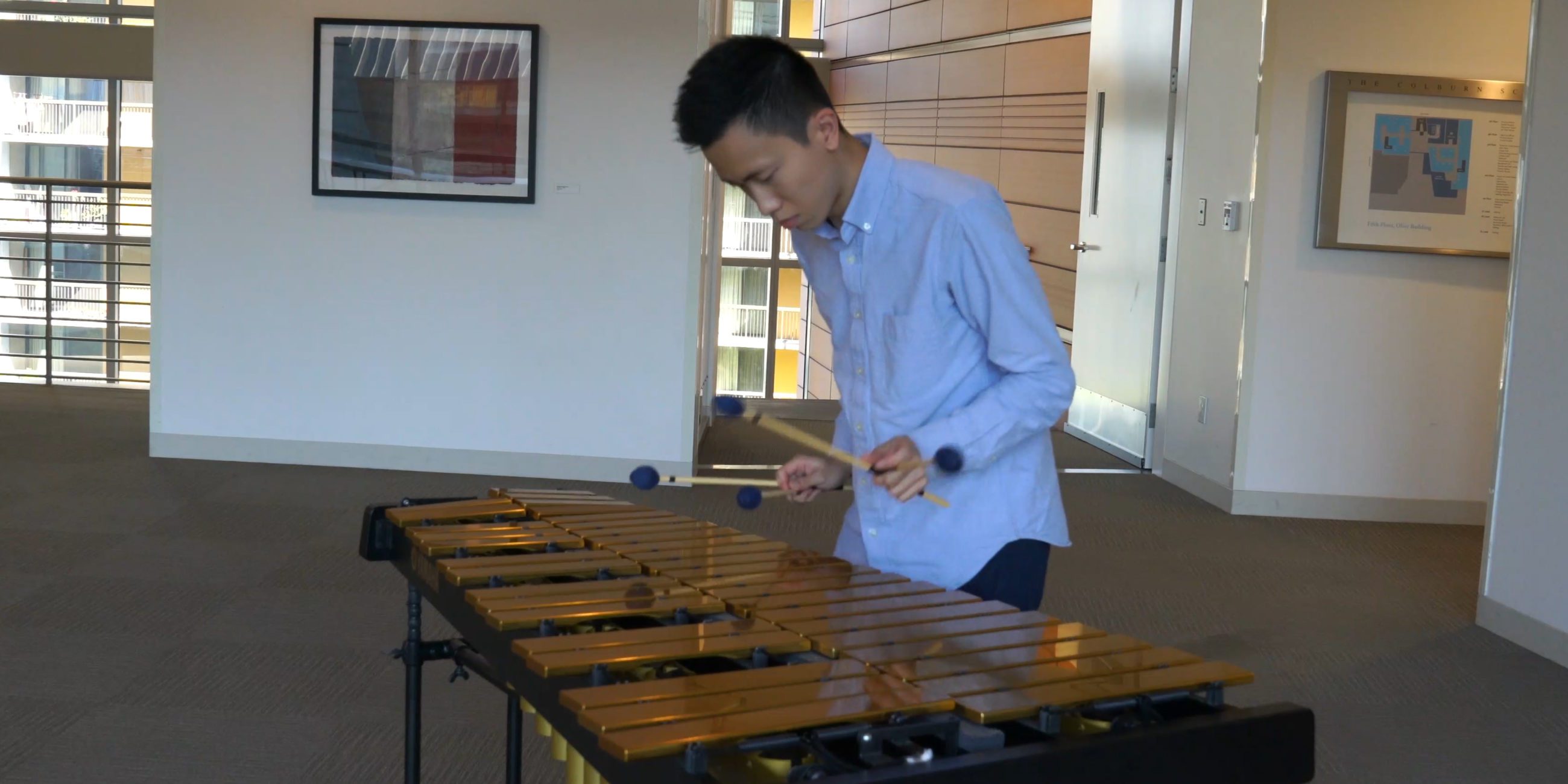