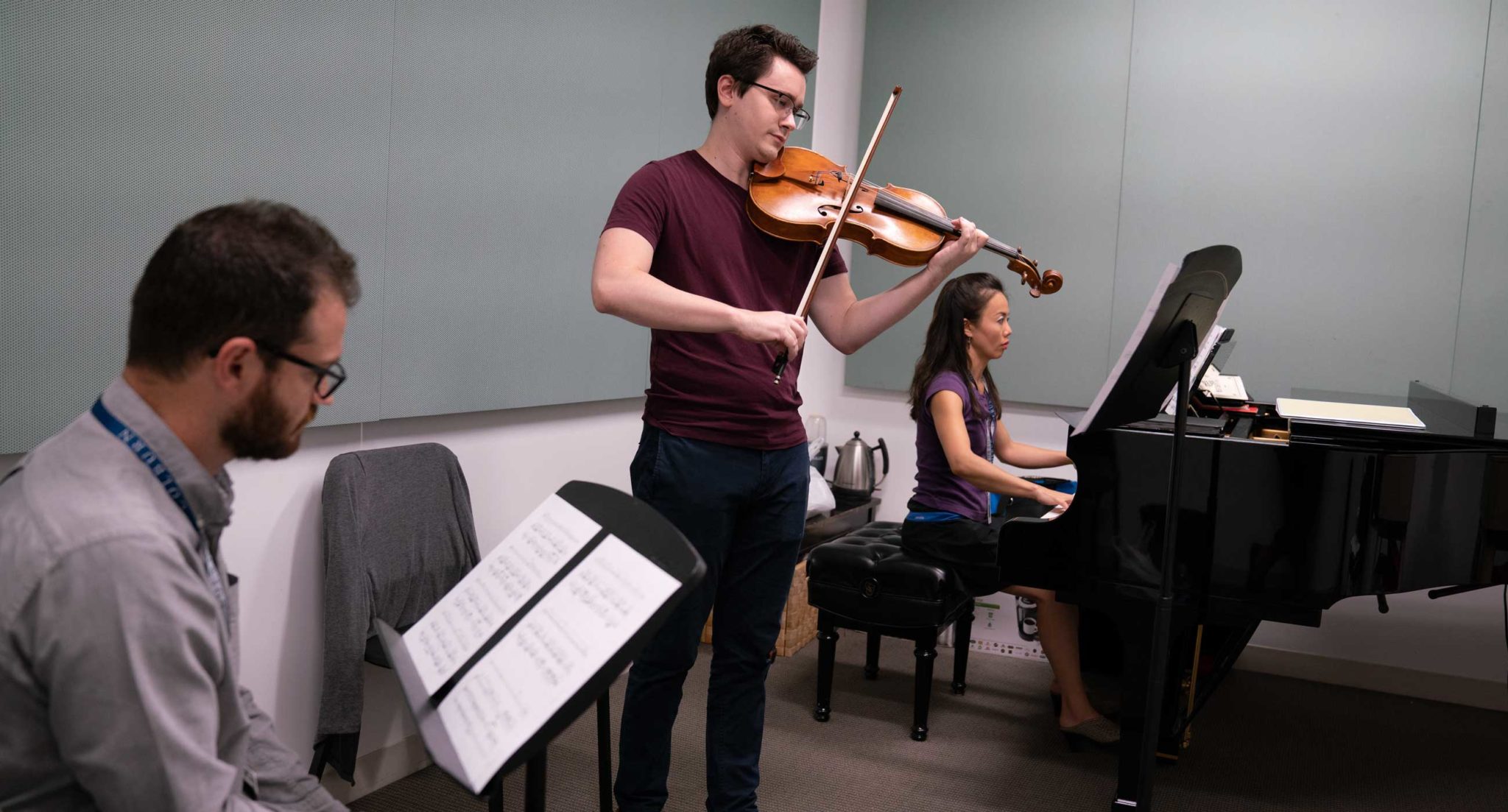 This Friday, October 5, faculty Noah Meites and Jordan Nelson will present a program of their own works performed by Conservatory students and new music history faculty Thomas Kotcheff and Sarah Gibson, who comprise the piano duo HOCKET. We sat down with Noah and Jordan to discuss their works and finding students to perform them, the importance of contemporary music in a conservatory curriculum, and the value of students working with living composers.

How did you choose what to put on the program?
Jordan Nelson (JN): One of the ways the program started was a sort of celebration of our music and also our collaboration with HOCKET. One of the things for me was seeing opportunities to not just have HOCKET perform, but also to integrate Sarah Gibson, who’s this fantastic and really experienced chamber musician, with some of the performers here. That was sort of an opportunity I couldn’t miss.

Noah Meites (NM): Similarly, I started with HOCKET because they’re joining the Ear Training and Theory faculty. And then when we were planning this, we were talking about trying to find pieces that could be premieres on the program. I had this brass quintet piece that had been on my desk for about five years, and I kind of forgot about it. It’s kind of funny, we were talking about it and I couldn’t remember the title. I had to look it up. It was a piece that I was never really happy with, it never quite coalesced. So it was really fun to take it out this summer and kind of turn it into the piece that I wanted it to be, and the brass players here are so incredible that I was excited to have them do it. And there was a great response from the players here to do it.

How did you recruit students to play?
JN: For finding who to play my violin piece, it was very helpful for me to go to Martin Beaver and ask him who he thought in his studio might be able and willing to play. One of the things that was kind of fun for me is that the quartet that has this bassoon part in it. When I was writing it, writing for the bassoon was a new thing for me, so I was working on some ideas and I decided I wanted to show it to a bassoon player. I emailed Jordan Brokken, who had been my student a couple years ago, and he kindly sat down with me and tried out some of my sketches for bassoon last May or April. So the moment that I knew that this was going to happen and that I had the concert, I immediately approached him, because it felt like actually giving him the relationship with the piece that he had started, giving him the full fruition. It was exciting.

NM: It was also kind of fun, piggybacking on that a little bit, because the pieces we write as composers are kind of like our children. We kind of birth them and nurture them. But also, we get to know our former theory students so well. We get to know their personalities and who they are. For instance in bioskop, there’s this violin part. I taught Aubree Oliverson last year, and I got to know her not just as a theory student, but also her personality, in addition to her playing, which is of course fantastic. And in this piece, it’s not humorous, but it’s self-consciously about Viennese salon music, and it’s sort of kitschy in a way. I just imagined her playing it, and having fun playing it, so it’s fun to think about using our experience and familiar contexts, and be able to matchmake in that way between our pieces and former students.

What do you think is the value for students of expanding their horizons in terms of repertoire and working with composers?
JN: I see a lot of value in it. You hit upon some of it in just the basic sort of growth in repertoire knowledge and the skillsets that are required to approach different kinds of repertoire. I think there’s also an opportunity to be engaging in the picture of what I believe the musician is encountering now in the real world, which is often making your career partially, if not a lot, in collaboration with composers, working on new projects, and taking on those opportunities and that identity. We’re kind of giving them a small model of that, as an opportunity with this project.

NM: It’s also really good for musicianship, in the sense that so much of the playing they do is orchestral playing, or it’s of repertoire pieces where there’s a specific style with a sound world they know of going into it. But with these pieces, they don’t have that, so they have to make it themselves. I think it’s a really good opportunity for them to shape their sound.

Again, with this brass quintet piece, I can hear it happening already. The first rehearsal, they were playing it like orchestral musicians. And I was trying to break it, like stop articulating so well. Be lazy. That got them thinking, and they’re starting to get it. They’re starting to develop, like Jordan said, their own musicianship and their own sense of how the sound should be. They’re taking ownership of it in a way which I think is really valuable for young musicians, or any musician really, to work on.

JN: Another opportunity that I see is not just having these student performers work with us as composers, but also Sarah and Thomas. I think that the fact that Sarah is playing on this chamber piece of mine with these other students that I’m conducting is a great opportunity to bring an expert in performing and preparing and rehearsing new music. To work with these students and give advice on tangible techniques, of how do you conquer really tough rhythms, or really tough textures that you have to find a way to decipher and make music out of? Thomas and Sarah have been making a living for the past several years, among other things, on deciphering new music that’s written for them and so they have really become experts on that art of looking at a score that’s never been played and making it musical, not just sound.

How would you like to see contemporary music integrated into a conservatory curriculum?
NM: I think that this a great example of it. I think this sort of collaboration of having students perform works of composers who are on faculty is really valuable. It’s valuable for them and but also valuable for us. They’re getting to know as musicians and not just as theory and ear training faculty, which is good.

As far as for how to integrate it, Colburn is a very project-based place. The whole model is, orchestral concert, orchestral concert, you have this intensive thing, and I think that’s kind of what we’re doing for this concert. And I think the students seem to respond to it well. Having these short intensive bursts is effective, because honestly that’s what being a gigging musician is like. You don’t get a piece at the beginning and say, two months later, we’re going to play this piece. No, you get it the week before and that’s it, two rehearsals later, boom. That’s the gig. I like that aspect of it, and I think the students are responding to it well.

JN: In terms of playing new music, I think that’s where events like this really just open up the conversation more. It gets students to see that it’s not only viable for professional development, but it’s actually also a different outlet for creativity and in some cases, a little bit of joyful playing around and goofiness that can come out in the new music process. It’s a giant tapestry and I think we’re kind of filling it in slowly but surely. I think one of the things that I’m proud of, and all of us who are involved on the faculty side, is the integration of the faculty and the students. One of the ways it started was having the faculty we do in the theory department, having Noah and Sarah Gibson and Thomas Kotcheff. We have our own little set of people to be doing this, and that’s also part of what we’re celebrating with this concert.

Join us for Noah and Jordan’s faculty recital on Friday, October 5 to hear world premieres and other contemporary works. Find out more about the performance.