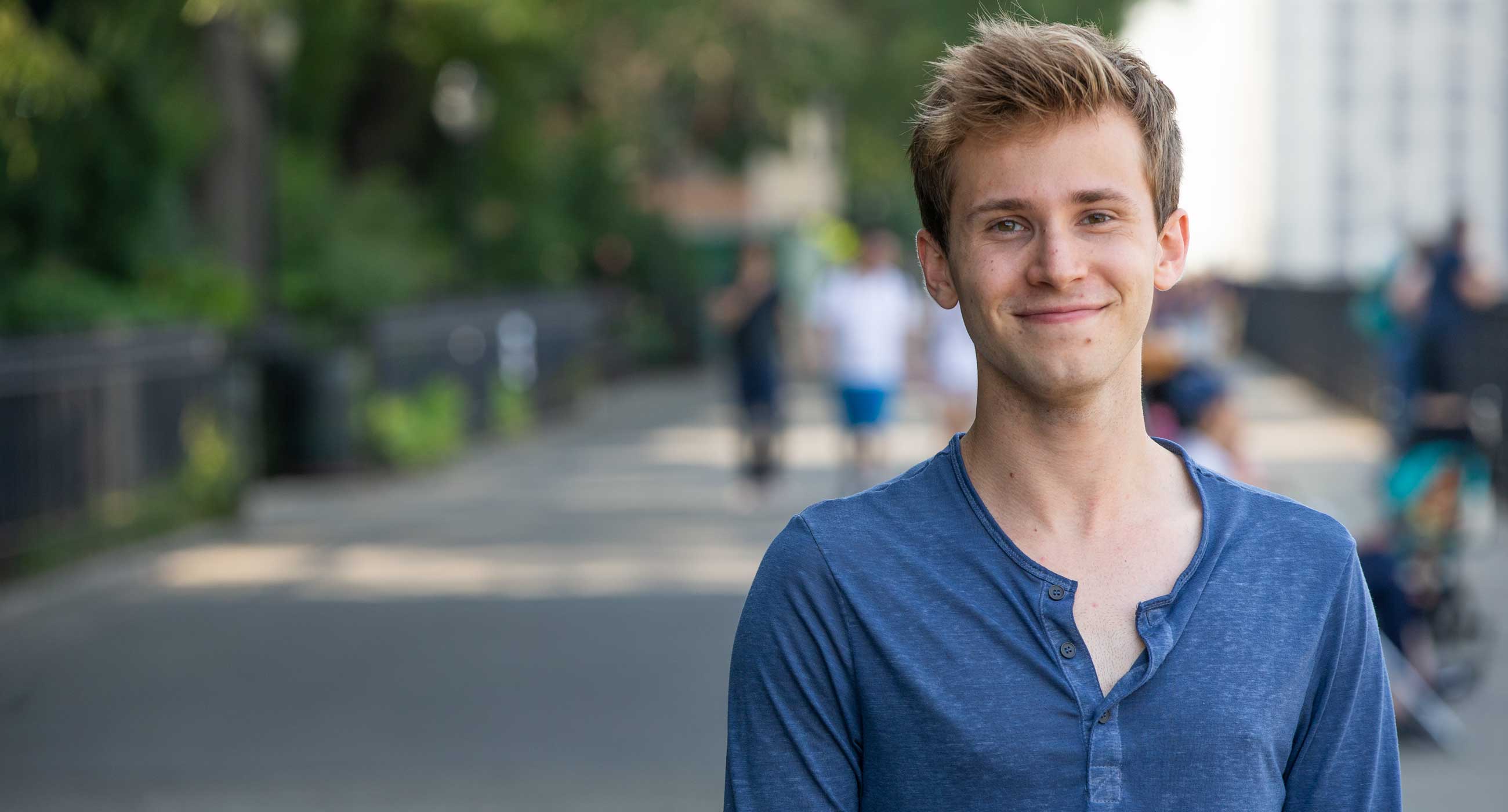 Nicholas Podany, 22, studied tap dance with Denise Scheerer at Colburn from 2005–2012. He is currently playing Albus Potter in Harry Potter and the Cursed Child on Broadway.

When did you start tap dancing?
When I was eight, I auditioned for a musical called Crazy for You, which has a lot of tap dancing in it. Right before we started auditioning, I was in an accident where I was hit by a car on my bike. It snapped my femur in half. I had a huge concussion and I had to be in a wheelchair for about three months. I wasn’t able to tap dance in the musical but I was still in it—I was not about to miss out. I just got wheeled around on stage.

I promised myself that as soon as I got out of the wheelchair, I would learn how to tap dance. My mom researched where the best place to take tap was and Colburn came up. We went and I started learning from [Denise Scheerer] and we’ve been friends ever since.

Why do you like to tap?
So much of my life is about acting, at this point. That’s where I’ve started making my career. One of the first actors I ever fell in love with was Fred Astaire and Gene Kelly. It was a different style of narrative telling back then, but it was something that really hooked me. Something about, the musicality of their dancing also connected to the musicality of their line reading. If you want to be a good actor, you also have to be interested in being a good dancer and a good musician and all that, because I think art energy feeds other art energy.

I just connected so much to tap. I’ve been playing drums since I was five, so rhythm has always been a huge part of my life.  When I found out I could make these incredible rhythms with my feet, especially after having just gotten my left leg back, I wasn’t about to throw that away. Ever since then, it has been such an important part of who I am.

What was your Colburn experience like?
Colburn is definitely a second home to me. I feel very loved in those hallways.

I was doing the Saturday morning tap program. It taught me vigilance and work ethic. We were doing really complicated tap stuff for our age, but it wasn’t necessarily about getting the steps correct. I think the thing that really set Denise apart from other teachers I’ve had in the dance world is that she really just wanted to see us try our hardest.

Dance is so much about telling a story physically and through movement. It’s not about hitting every step correctly. You want to seem as though you have an ease about you. There is so much in this play that I’m doing right now that is physical storytelling. I couldn’t have gotten through the five movement callbacks for this show without that mentality of really telling a story through movement, rather than getting all the steps right. Having that instilled in you as a little kid is really cool.

How do you tell a story through movement?
In the Harry Potter play, the first 15 minutes of the show are incredibly movement-based. You have a lot of information to get out in a very short amount of time. I really have to rely on my body language, on the choreography, to convey not only the story but also how the story is affecting me. We really have to grab the audience with those first 15 minutes of movement.

You try your hardest to get the steps right but it is far more important to convey the emotions and reactions and all that through your movement based on what the narrative is, not on what your evaluation of your dancing is.

What was the audition process for Harry Potter like?
It was long. It was a combination of both acting auditions and then movement auditions. The movement auditions were in 9/8 time signature, so they really wanted people who not only could tell a story through movement but could also count and have rhythm. That felt like home to me, doing tap and all sort of crazy ways to divide rhythms and all that. I was ready for that.

It was nothing short of what actually this process has turned out to be, which is unbelievably intense and so incredibly rewarding. I’ve always wanted to be a wizard since I was six and so the fact that I was auditioning, pretending that I had a wand… I would have rather done nothing else in the entire world. And now that I am on stage with a wand in my hand and I’m pointing at things and things are happening, it’s really cool.

What kind of advice would you give to students here who want to be professional actors?
The best advice I was ever given was: don’t get it right, get it true. I would never lose sight of why you’re doing it, of the story behind all of it. When it’s go time and it’s just you and an audience, 90 percent of the time, no one is going to notice if you got that thing right unless you tell them that you got it wrong.

You obviously try your best, do the most work you can, but when you’re out on stage, let it go. It’s so easy to get wrapped up in correctness and all that. And then you lose sight of how fun what you’re doing is. It is so fun at the end of the day, to be able to make pretend and make music and make movement.