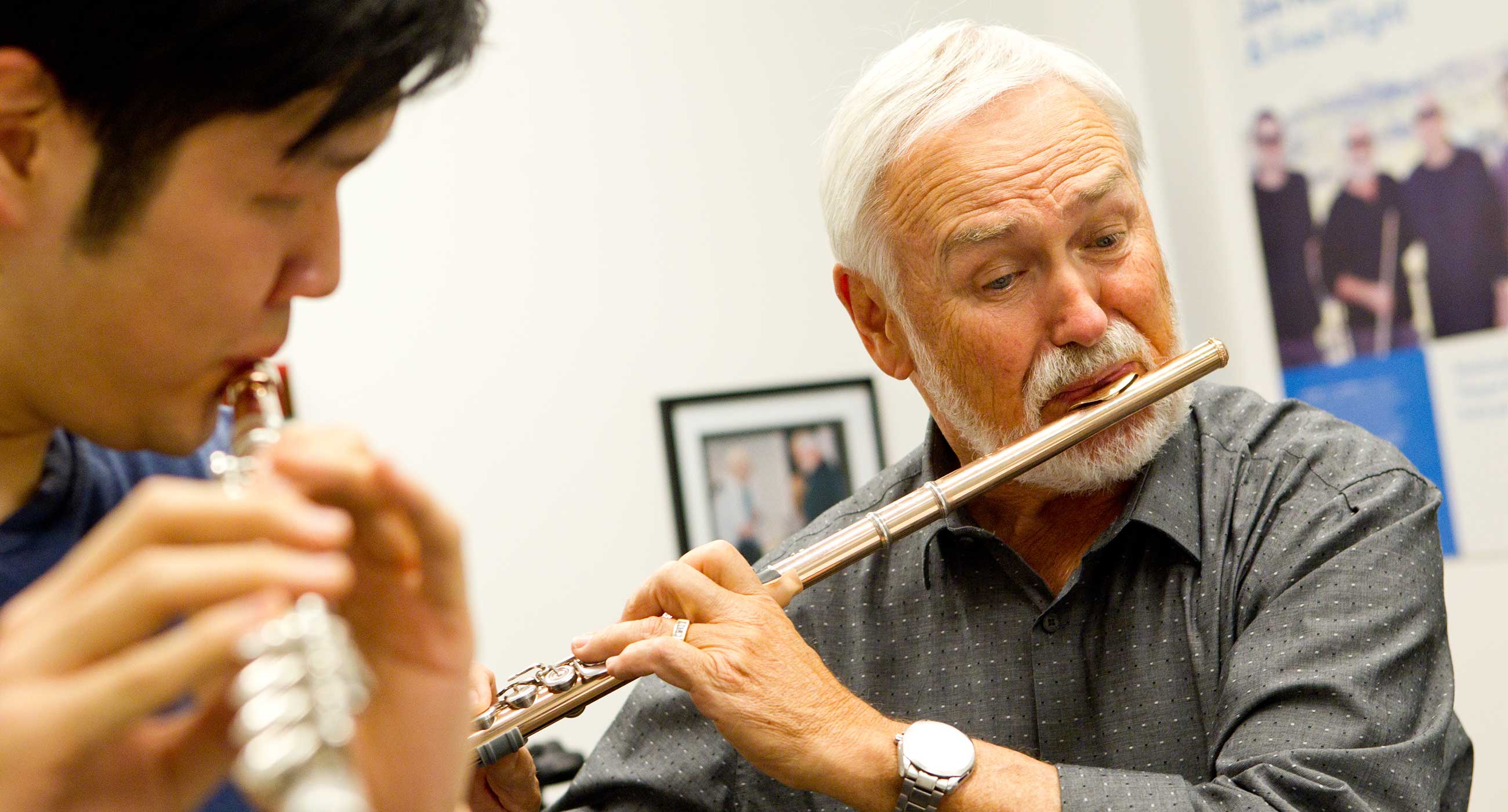 Jim Walker has been teaching flute at Colburn for 10 years. A former LA Phil principal, he has students from across the school in the Conservatory, Music Academy, and Community School. Prior to teaching at Colburn, Jim enjoyed careers in not only classical orchestras, but also in jazz and studio recording. Jim grew up in Greenville, KY.

This interview has been lightly edited for style, length, and clarity.

What brought you to Colburn?
I came to LA in 1977 to play principal flute in the LA Phil. I was in that orchestra until 1985, when I left. I had started a jazz group that was having some success with recordings and on television, and I was also getting opportunities in studios. So I left the orchestra in 1985 and started teaching at USC at 1988. Fast forward to I guess 2008, when Colburn added winds and percussion, and I interviewed for the position here and was fortunate to get that.

What’s it like teaching students at all different levels?
I think I recognized maybe 20 years ago that I’m essentially a teacher at heart. I love performing and I still do that a lot. But I think if you’re a teacher, you don’t just love teaching the advanced people. The main thing that’s great for me is to be able to teach people who are really motivated and that I don’t have to supply motivation for. And that’s just the privilege of having done it for so long, that you build a reputation so you attract better students. I don’t actually delineate much between my 28 and my 10 year old. A flat note is a flat note, great technique is great technique, and using vibrato in the wrong place is what it is.

How did you become successful?
I would say I’m pretty ambitious, mostly not to be poor. I grew up without much. My parents were great people, teachers, but with very minimal income. We always had everything that we needed, but I remember my teenage years, working on a farm for 50 cents an hour. I was thrilled to be making a little money. Honestly, that has driven me to work really, really hard my whole life.

The personal ingredients that have helped me achieve that were that I’m pretty competitive and I don’t tend to freak out under pressure. When I’ve had auditions, I’ve been able to deliver a fairly good representation of myself. Playing in the studios—and I spent like 30 years doing motion picture soundtracks—can be pretty a lot of pressure. I never really honestly felt it that much. I don’t know what the mechanism was, but I felt like I was a very good sight reader and I was comfortable with myself.

I think trusting yourself as a player is pretty important. I did that by practicing certain things that weren’t necessarily in the mainstream. A lot of it was the stuff that I did with jazz. Learning to be a bit of a jazz player really helped my overall sense of what an instrument is capable of. All of those things kind of helped. I think my professional versatility as a performer in classical, jazz, and commercial music, and as a teacher is what’s led to whatever you call success.

What drove you to pursue jazz?
I grew up with a great jazz clarinet-playing father. We were in this tiny town, but he was in this band that was kind of legendary in western Kentucky, Indiana, that whole tri-state area in there. I heard him play a lot and it was always intriguing to me. I started on the flute but early on, I started playing other instruments. I played bass clarinet, and then I’d play a little piano and saxophone in the jazz band.

I couldn’t improvise, but I knew that language. I listened to that music all the time. If you had looked at me as a 10th grader in high school, there was no way I’d end up in a symphony orchestra. It just wasn’t my orientation at all. I was just telling one of my students today that as a freshman in college the orchestra conductor in my evaluation said, “he seems to be very bored with playing in an orchestra.” And I probably was, at that point. I think what really led me to move on beyond that was honestly wanting to have a job, and really wanting to make a living being a flute player. The symphony orchestra was one of the best places.

How do you think it helps you to be well-versed in both jazz and classical?
Adding jazz helped me become a better player harmonically. I have a much deeper awareness of what’s going on in the music that I’m playing. I’m able to break the code, the hieroglyphics of written music, really quickly when I can see a group of 30 notes and reduce it to a single idea because I know what’s going on harmonically, rather than seeing it as 30 notes that don’t make any sense. That really has helped me a lot. In college, I played in a jazz band that was incredibly rhythmically strong. I was also in a wind ensemble with a conductor who was incredibly rhythmically demanding, and I think my rhythmic background really went a long way in terms of my success in the orchestra world. I think that helped in the studio too.

Do you think it’s important for students to have a traditional classical background?
Absolutely. Playing an instrument from a traditional classical approach gives you the voice and fluency that is absolutely necessary to play any kind of music. If you just, let’s say, want to become a rock and roll flutist, you’re probably going to learn to play all the notes. You’ll be able to sound kind of like you know it, but your sound will not even be close to what a good classical player would have, because sound is not what you’re talking about when you’re playing those kinds of music. The way I play jazz flute is more sound-oriented than a lot of great jazz players, but that’s just my background. When I improvise, though I don’t consider my improvising to be brilliant at all, it’s probably a lot more articulated than other real jazz players. It’s just probably from my classical background too.

What’s your teaching philosophy?
My number one goal as a teacher is to have a student be able to hear what my ears hear. So I spend every lesson trying to communicate that. My philosophy in teaching is to more clearly identify where a student’s abilities are out of balance and to change the balance, to keep the strength at a high level and to bring up the other one. Most students tend to be higher in the technical department than they are in the expressive department, and that has a lot to do with being comfortable in being expressive.

Most every young student who plays at a high level has spent a majority of their teenage years in the practice room, not in the social mainstream. And so comfort in that zone is not very easy for them. As a performer, I think you have to have that. You’re walking out on stage, you’re not really hiding. You can’t just isolate yourself and be in a bubble. I think there’s a lot that requires communication. I do approach that as much as possible.

What is some advice you’d give to your students?
Be passionate with your dream, don’t be discouraged by hard work not immediately paying off, and when the passion is gone, either reboot or look for something else. You gotta keep the joy, you gotta keep the passion high. I left the LA Phil when I was 40 years old because it was a great job, but my passion for that was not as high as it had been. I left the studios in 2010 because my passion for that no longer existed; it had been a great job. And I don’t see it happening with teaching, but if in fact it did and I felt the fire die, that’s when I would walk away. I think you just have to keep monitoring yourself, like am I really enjoying this? Am I excited to have this next student come in, or am I at least not dreading it?