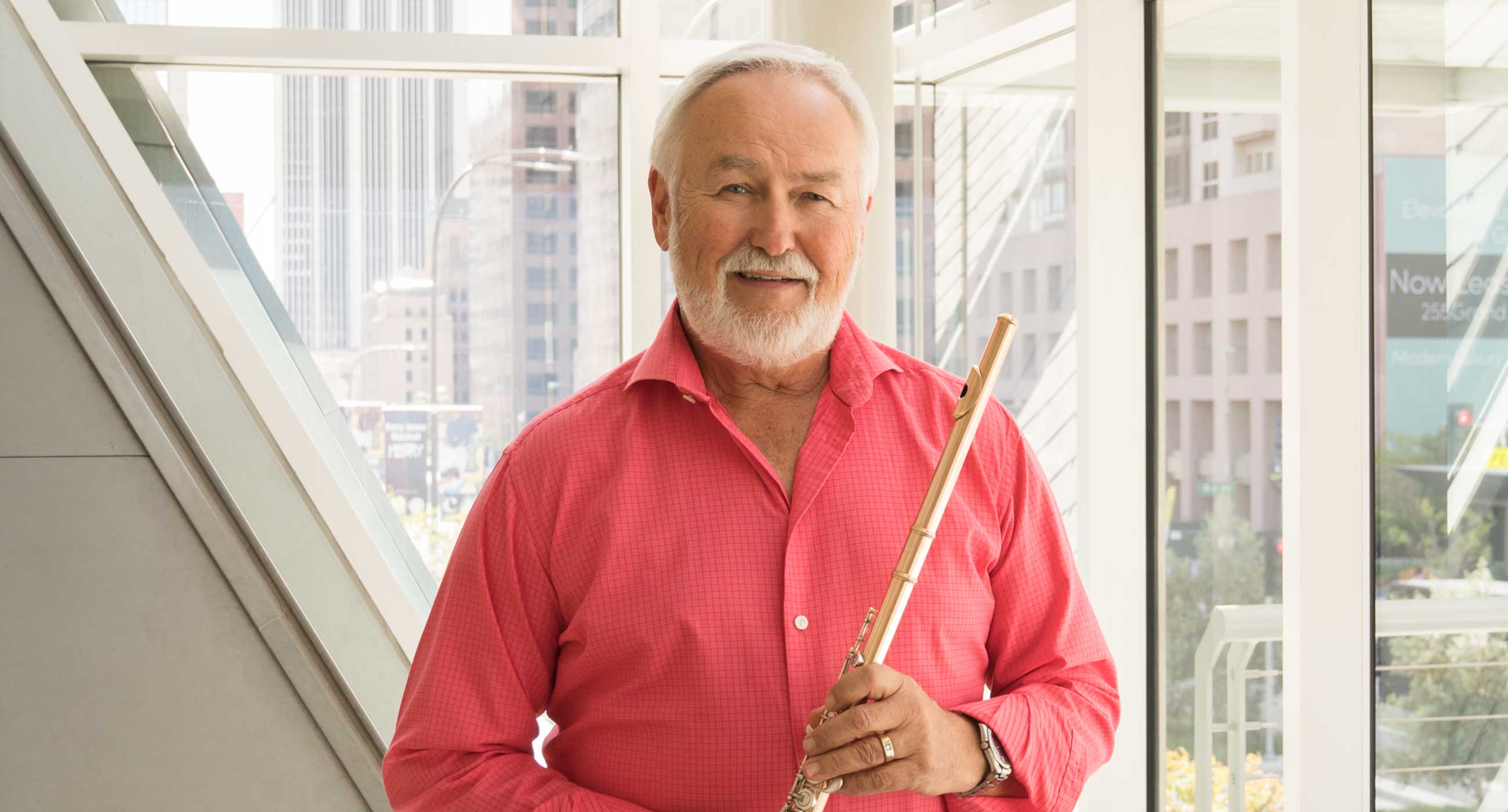 Few other flutists in history have made such indelible marks in so many musical circles. From jazz to pop to classical, television to film to the concert hall, Jim Walker has never met a crowd that didn’t love his powerful, “stand and deliver” performances.

A star was born in 1969, when Jim was named Associate Principal Flute in the Pittsburgh Symphony after a stint playing in the US Military Academy Band at West Point. He quickly gained the admiration of colleagues and audiences in Pittsburgh and set his sights on Principal Flute jobs. After eight years he won the Principal Flute position in the Los Angeles Philharmonic and never looked back.

To be Principal Flute of a major orchestra is to sit at the pinnacle of the profession. Most flutists who reach that height are content to spend the rest of their careers there, but Jim but Jim felt an eagerness and aspiration to move his music-making forward yet again. After seven successful seasons of performing, recording, and touring with the Los Angeles Philharmonic—during which time the New York Philharmonic briefly borrowed him as Principal Flute for their 1982 South American tour—Jim left the orchestra, diving off the mountaintop into the world of jazz and studio recording.

Jazz had been one of Jim’s puppy loves, and he was inspired to get back to it by LA’s lively club scene. After a few years of avid listening in dives, gaining confidence undercover in the practice room, he organized his jazz quartet Free Flight. Flute, piano, bass, and drums playing jazz-classical fusion, Free Flight took the music world by storm. Jim’s unique combination of vision and determination pushed the group to multiple appearances on the Tonight Show and the Today Show and brought them a number one record (Slice of Life). By the time Jean-Pierre Rampal—the granddaddy of modern classical flutists—called “Jimmy” his “favorite jazz flute player” in the 1990’s, Jim was a bona fide jazz flute superstar.

Life has been equally good for Jim Walker in LA’s famed studio scene. He has been a first-call studio flutist for the better part of two decades, and his bold, expressive playing can be heard on hundreds of soundtracks and commercial recordings. His playing has become the gold standard from Hollywood to Carnegie Hall and has unlocked the door to studio and concert collaborations with everyone from John Williams and Paul McCartney—“the thrill of a lifetime,” says Jim—to Leonard Bernstein, James Galway, and the LA Guitar Quartet.

After all the reviews have been written and the stage and studio lights dim, however, Jim has said that the one aspect of his career he could maintain to the grave is teaching. He has been filling his students’ lives with music for four decades now, just as his own parents—Bob, a jazz clarinetist and public school band director, and Barbara, a church organist—filled his upbringing in Greenville, Kentucky, with piano and flute lessons. He went on to become a graduate and “Distinguished Alumnus” of the University of Louisville as well as the University’s first “Alumni Fellow” from the School of Music. To this day Jim credits a parade of flute teachers with helping him rise through the ranks, from Sarah Fouse and Francis Fuge in Kentucky to the Metropolitan Opera’s Harold Bennett, the Philadelphia Orchestra’s James Pellerite, and internationally renowned flutist and conductor Claude Monteux.

Jim has taught hundreds of flutists at these terrific institutions. Many of them have gone on to successful orchestral careers, holding Principal Flute chairs in major symphonies from Phoenix to Boston to Beijing. Still others have careers in fields as varied as gospel music and arts administration. Jim is not interested in simply training musicians; he inspires each pupil as a whole person, and students leave his tutelage feeling empowered, reaching for the stars. With such a legacy, it is no wonder that students on four continents have flocked to hear his recitals and master classes. Jim’s creativity allows him to reach not only these students but also others he never sees with his editions of flute masterworks on the Alfred Music Publications Young Artist Series. He is also completing a set of flute method books filled with unique, fun, highly instructional exercises so that future generations can continue to benefit from his wealth of knowledge and generosity.

Jim Walker is living proof that with enough creativity and determination, anyone can reach the stars. He is a living legend, and a true Renaissance Man of the Flute.