Modern Dance offers the freedom to “just be” 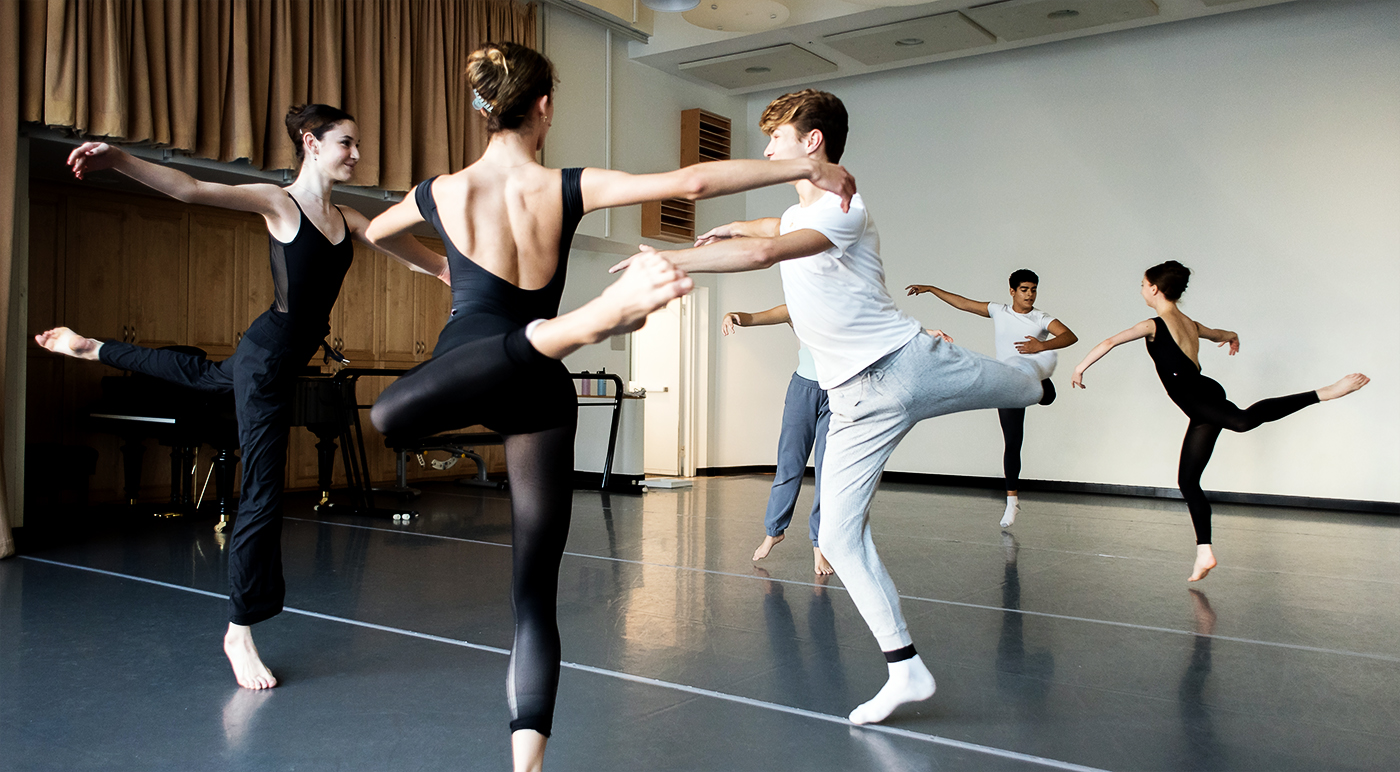 Dance students learning new movement and repertory during the intensive week of training with the Cunningham Modern Trust.

Colburn’s Modern and Creative Dance Chair, Tamsin Carlson, shares a glimpse into her past when modern dance took root and highlights the invaluable experience of a week with the Merce Cunningham Trust on campus.

Hailing from the UK, Tamsin started dancing at seven years old and attended a performing arts school that began in middle school around the age of eleven. Similar to U.S. academy programs, Tamsin lived at the school where she practiced her art form during the day intertwined with academic schoolwork. During her time at the performing arts school is when Tamsin’s love of modern dance took shape. A student from London Contemporary visited to teach the Graham Technique. This exposure to a new dance form solidified in Tamsin the power that modern presented. “I think what I loved is that I didn’t have to pretend anything. I didn’t have to smile if I didn’t feel like smiling. You literally could just be, and the drama was just in the movement. And if you’ve seen Graham, it’s very dramatic!”

Modern dance is like a strong physical expression. Whether it’s of an idea, or of a story, or of a feeling that uses space as one element and that also uses the people in the space. It’s a story about the relationship between the people to each other and to the space. Tamsin Carlson

Tamsin joined London Contemporary and later pursued Cunningham Technique training in New York where she became an understudy or “RUG” (repertory understudy group) for the Cunningham Company. Merce Cunningham recognized her talent in instruction and invited her to teach for several years. Sometime later after relocating to Los Angeles, Tamsin joined Colburn in 2014 as a Dance faculty member.

Reminiscing about her beginning at the Trudl Zipper Dance Institute, Tamsin expresses how it reignited her love of teaching and brought the influence of her Cunningham background to the forefront. “The program here [at Colburn] is really unique…. I think we’re only one of the few schools that have modern. It’s not as ubiquitous as say contemporary or hip hop,” Tamsin notes. “There are only two schools that teach Cunningham to this age group, Colburn and the North Carolina School of the Arts.”

Modern at Colburn starts with the Lester Horton Technique and as students progress in age, strength, and technique, they then receive an introduction to the Cunningham Technique developed by Merce Cunningham and the Graham Technique developed by Martha Graham. Tamsin mentions that Yuka Fukuda teaches the advanced Horton classes at Colburn and Chard Gonzalez teaches both the Cunningham Technique and the Graham Technique, alternating by semester. This variance of teachers is important as Tamsin points out that “part of the Cunningham ethos is that you should have different teachers—that all teachers have a valuable viewpoint” to experience. With this in mind, the Modern Program attempts to present different Cunningham teachers and guest teachers to provide those varied perspectives to students.

In understanding the nuances of the three modern dance techniques (Graham, Horton, and Cunningham) taught at Colburn, Tamsin describes them as follows: Graham is dramatic with a lot of floor work. It’s a useful tool to really understand the pelvis. It’s very grounded and very physical. Horton is a little freer, but still very grounded and physical. Cunningham takes the ballet form in terms of working the lower half of the body, while the torso has multiple movements, in regard to tilts, twists, and curves. Cunningham is a little more abstract than Graham, but it’s still that you are a person in space relating to the other person or people in that space. For Merce, all of the space was important.

Delving into Tamsin’s specialty training and knowledge as a licensed teacher of the Cunningham Technique, she leverages the subject of space to define the technique further. For a dancer, any side they face can be front. “I liken it to a Rubik’s cube in that the body is divided into three so that it works as a whole. But then the three parts of the body can move independently: the legs can be going one way, the torso another, and then you have the pelvis which is the center.” She also mentions that Merce intentionally avoided terminology for his technique, which “makes it a very physical technique to teach because the language isn’t there.” A teacher uses other words like brush or a literal direction such as “extend the leg forward.”

As some confuse contemporary dance with modern dance, Tamsin highlights some of the differences between the two. “Modern is a bit more abstract and contemporary tends to be set to music, often popular music of the time, so it tends to rely purely on the momentum of the body and the movement.” For Cunningham, the choreography and the music are built separately. A cornerstone of the Cunningham technique is that the choreography and music come together on the stage. “The idea was that they could coexist and have a relationship, but the relationship was through chance.” Whereas the Graham Technique is based on myths, so there is a strong story or narrative connection.

In reflecting on modern and other dance disciplines, such as ballet and tap, Tamsin states, “it’s like with opera, I think modern can be really abstract … but people may be more intimidated by it. It’s a more challenging discipline; it challenges you as a viewer.” Tamsin inquires of Seth Belliston, a faculty member of ballet who is passing by, to define the difference between modern and other dance disciplines. He expresses that’s it hard to put into words as “it’s apples and oranges” in which Tamsin quips, “both are trees,” and Seth quickly follows up with “but in modern, you can be the tree.”

The Cunningham Modern Trust hosted a weeklong staging event at Colburn in late October. This was the first time that the Dance Academy and intermediate modern dancers were invited to participate with the advanced modern group. The students trained with Silas Riener, a Cunningham stager, in “TV Rerun,” “Scramble,” and “Changing Steps.” These phrases are quite challenging and Tamsin believes they empower dancers to “have more confidence in themselves because they are relying on themselves to make decisions.” She further notes that her students today are quite “bright and up for the challenge; they embrace it.” The opportunity to learn new repertory and work with and hear from another voice (the stager) are two significant takeaways for students participating in the week’s training.

Overall, Tamsin understands that modern dance gives her students “fearlessness because they have to develop confidence and strength in their body to move through space.” The value of modern dance for dancers: “it’s confidence, it’s technique, it’s strength, and the ability to really be able to travel fearlessly.” Fostering these aspects for her students is Tamsin’s goal.

See the Music, Hear the Dance, Saturday, November 5 at 7 pm in Zipper Hall

Counterpointe, Saturday, March 25 at 2 pm and 7 pm in Zipper Hall

Spring TapWorks, Saturday, May 20 at 2 pm and 7 pm in Zipper Hall

Spring Dance Festival, Saturday, May 27 at 2 pm and 7 pm in Luckman Theatre