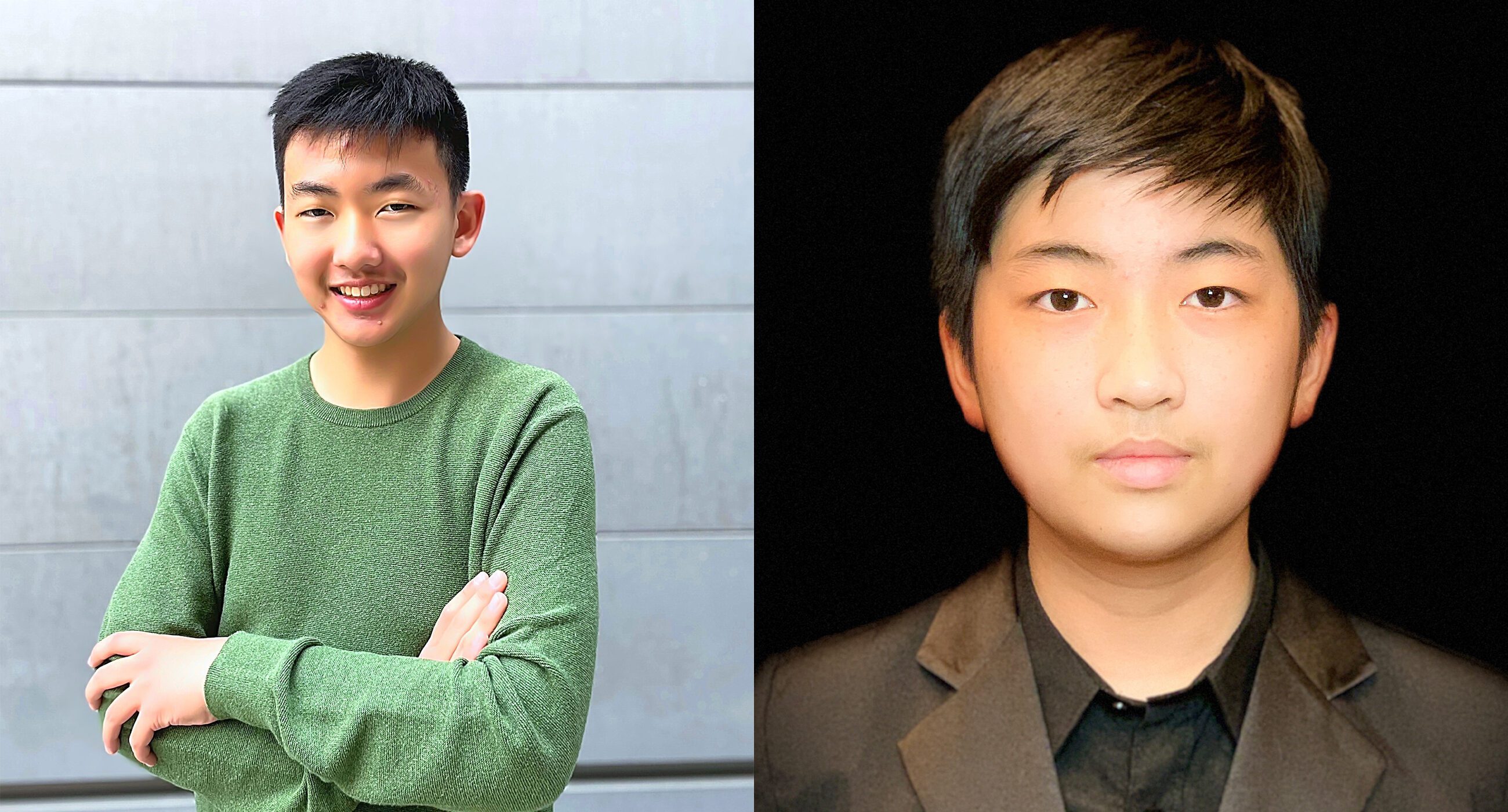 In preparation for our 2022 Celebrate Colburn gala, which is the School’s largest fundraiser of the year, on Sunday, April 3, we spoke with two Music Academy pianists, Caden Lin and Daniel Wang, who will be performing Mozart with our honoree and Colburn Artist-in-Residence Jean-Yves Thibaudet.

This feature has been lightly edited for style, length, and clarity.

How long have you been attending the Music Academy?

Caden: I started attending the Colburn Music Academy in 2021 fall but I have been on the Colburn campus since 2017 when I started having lessons with Mr. Bidini in Community School.

Daniel: I have been attending the Music Academy for almost two years. I joined during the beginning of the 2020-21 school year. Prior to the Academy, I also attended the Community School for two years, starting in 2018.

How did you get involved in performing at this year’s Celebrate Colburn gala?

Daniel: Back in December, Mr. Thibaudet heard all of the Music Academy students play a classical piece, and through an audition process, he selected Caden and I to play the concerto with him. I really hoped to play at the gala, when I heard that I was selected, I was overcome with joy.

The gala is celebrating the Music Academy’s second decade of instruction! What has being a student in the Academy brought to your music education?

Caden: I come to Colburn Academy every Saturday. My Saturdays are packed with all music-related classes starting from 9 am chamber rehearsal and lesson, followed by piano duo lesson, music history, and movement classes. My favorite classes are solo lessons, performances, or attending master classes in the afternoon. As a student of the Academy, I enjoy being in an environment where I can share my music with friends who have similar interests as I do.

Daniel: Being a student in the Academy has greatly enhanced my music education. First, the Music Academy curriculum is very rigorous and diverse. In addition to private lessons, I also take theory, aural skills, keyboard literature, music history, and movement classes. All of these classes equip me with the fundamental skills needed to become a musician. Furthermore, the Music Academy also gives students a lot of performance opportunities, whether it be through MAYAPs (Music Academy Young Artist Performance) or master classes. These opportunities have given me crucial performance experience that makes me feel more confident as a pianist. However, in my opinion, the close-knit community of students in the Music Academy has helped me grow as a musician the most. Though there are not many of us in the program, we are all very close with one another and learn a lot from each other. Every time I hear my fantastic peers play on a MAYAP or master class, I get inspired and motivated to work harder.

Why do you think a performing arts education is important?

Caden: I think music is another kind of language that doesn’t need any words. I often get really amazed at how composers could come up with such amazing pieces. To get to know those masterworks and be able to perform them is one of the most wonderful gifts. I think a good music education can be extremely important to nurture the needs of expression.

Daniel: Obviously, music education is essential in developing well-rounded musicians. However, I also think that music education teaches essential non-musical skills, such as stage confidence and time management, and instills important values like persistence and resilience that can be applied to all aspects of life.

Furthermore, in my opinion, music is a great gift. Even if a student does not end up being a performing pianist, music is something they can always cling to. Personally, whenever I feel depressed or stressed, playing some of my favorite pieces always makes me feel better.

Would you share a memorable moment from this past year in the Music Academy?

Caden: The year before I started Music Academy, everything was closed because of the pandemic, and we were all in our own place and met people only on the screen. I had several opportunities to perform online and it was very strange because it felt like I was playing for myself. When I joined the Academy, we could participate in MAYAPs in person (with a mask on), and it was really memorable to be on the stage again and play for friends and teachers.

Daniel: One of my most memorable moments from this past year in the Music Academy was playing at California Club with my piano trio last November. We played Shostakovich’s Piano Trio No. 1 in C Minor, which was the first piece we learned as a trio at the end of the last school year when we were just allowed to play chamber music again because of COVID. Even though played in a large, decorated room instead of a hall, the acoustics were very unique, and we had a great time playing there. After the concert, we had a nice dinner with the audience and talking to them and hearing their stories was a great experience.

You’ll be performing with Colburn Artist-in-Residence Jean-Yves Thibaudet at the 2022 Celebrate Colburn gala. What music will you be performing?

Caden: In the gala concert, I’ll be performing the Mozart Concerto for Three Pianos in F-Major K.242 with Mr. Thibaudet and Daniel. I’ll be playing the first piano, Daniel will be the second piano, and Mr. Thibaudet will play the third piano. The concerto has three movements. The first movement is festive with lots of surprises. The second movement is like an opera with three singers singing together. The third movement is a minuet, an elegant dance. All the movements have a cadenza where either one or all of us are playing a passage that sounds improvised.

Daniel: This piece has three contrasting movements, but overall, the piece is simple and lively.

What have you been doing to prepare for this special event?

Caden: Because the triple concerto itself is chamber music, I had to learn my part before I started to rehearse with Daniel. We practiced and took lessons together with our teachers as well. A week before the concert, we started having rehearsals with the Academy Virtuosi and also having extra rehearsals with Mr. Thibaudet. I have been mainly focusing on listening to others as it is a big collaboration.

Daniel: Of course, I have been practicing a lot! We have had a lot of rehearsals with the Academy Virtuosi and also some pianist-only rehearsals. I have also been listening to this piece non-stop to fully solidify it in my mind. I have also worked on my part with my teacher, Ms. Yui. She gave me great advice on how to conquer tough passagework and bring out the character of the piece. I also had many rehearsals with Caden, and both his teacher, Mr. Bidini, and my teacher gave us coaching on this piece as well.

Caden, you are a Thibaudet Scholar*, how has that recognition impacted you and your music education?

Caden: It is a big honor to know that I am a Thibaudet scholar. It is really generous of Mr. Thibaudet to give his expertise to supporting young musicians in the Academy. I feel like this is an extremely helpful experience in my music education.

And in closing, what are you looking forward to in the remainder of the spring semester?

Caden: I can’t believe that the semester will be over in a month! After the gala concert, I will keep working on the Rachmaninoff Piano Sonata No. 2 and Franck Sonata for Piano and Violin with my chamber partner. I’m also looking forward to learning the second Chopin Sonata as well.

Daniel: Since I will be auditioning for colleges very soon, I do plan to bring back some old repertoire that I will use for college auditions. In addition, my piano trio, the Olive Trio, was recently selected as a competitor for the Fischoff National Chamber Music Competition, so in late May, we will all go to South Bend, Indiana to compete. As a group, we have all worked very hard, and I enjoy working with my group mates a lot, so I am definitely looking forward to performing there with them.

*Thibaudet Scholar Caden Lin is a pianist in the Music Academy. The Thibaudet Scholars are named for renowned pianist Jean-Yves Thibaudet, recognized for his continued artistic involvement and dedication to the arts. The Colburn School extends heartfelt gratitude to all of our donors who contribute and extend their support to the Thibaudet Scholars each year. Learn more about the gala.