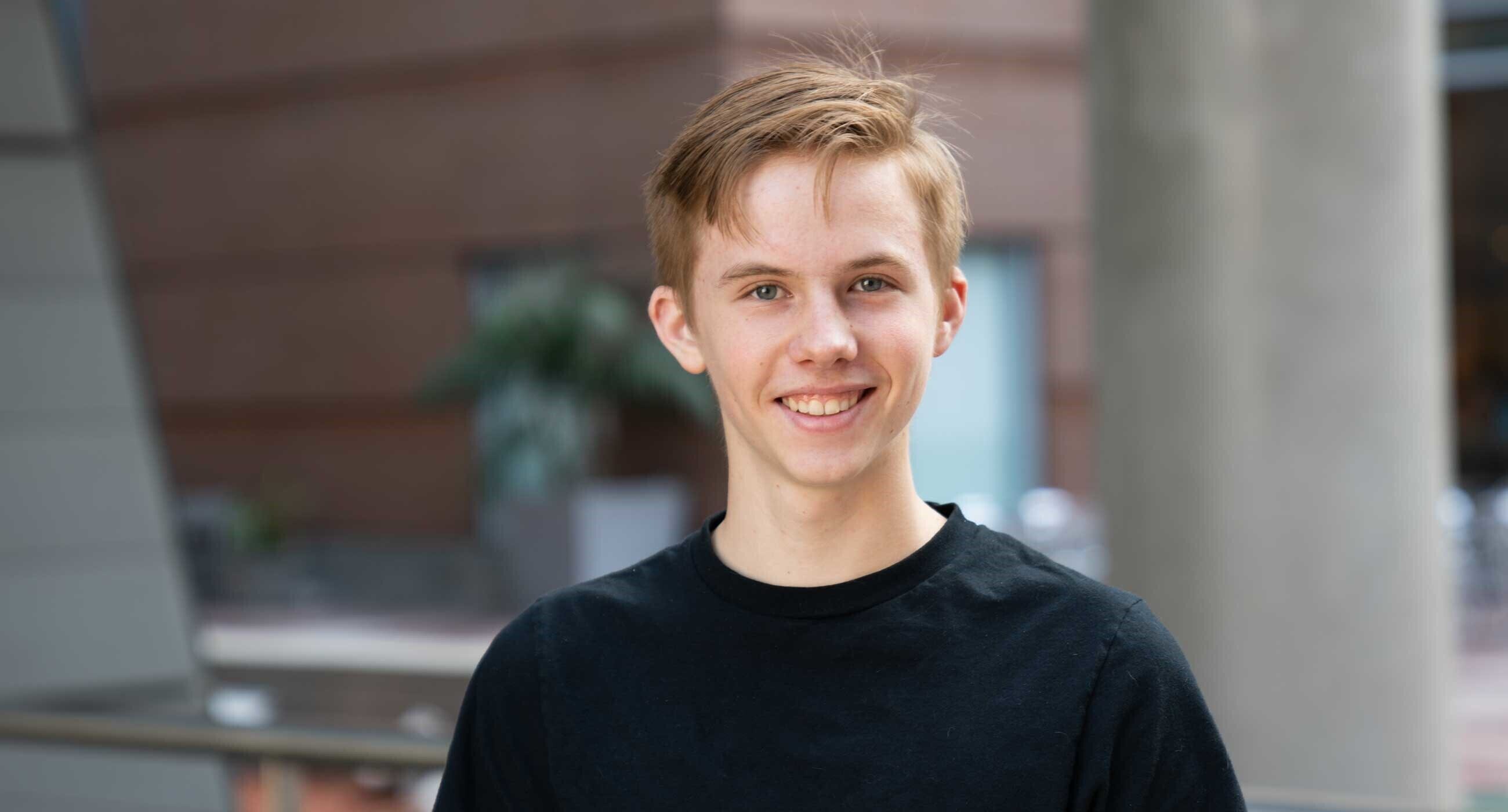 How did you start at Colburn?

I originally started Colburn by taking tap; I think I was seven years old. At the time, I started to really love dance. I would always watch Gene Kelly movies, and I was so intrigued— “oh, I really want to do this.” After that I started taking more genres of dance like ballet and hip hop, most also at Colburn.

How did your interest in musical theatre begin?

It was those Gene Kelly movies, which were all also musicals. I really liked musicals, but in my head, I was thinking, “oh, I can’t really sing or act” — all these things until Hamilton. When that came out, it blew up. My fifth-grade teacher would talk non-stop about it to the class and would do history projects with Hamilton. Everyone was obsessed with Hamilton. And then, luckily, in middle school there was a musical: West Side Story, which is a movie I also love dearly. I tried out and played Baby John, and I just had a blast. That’s when I really started.

With musical theatre being multidisciplinary, how would you say that studying musical theatre as a specific area of study is different from focusing on any one discipline?

You get all three—acting, singing, and dancing—basically. If you’re just working on one, you might get more specific learning in that area, but I feel it’s more important to have the wider range of all three, so that you can have all three skills. They definitely all blend together.

Of the aforementioned skills, do you enjoy any one in particular more than another? Is one easier or more challenging than another?

Well, since I started with dance, I’m definitely more of a dancer first. But I’ve gotten to do a lot of singing and acting with great teachers over the years at Colburn, and they’ve really helped me expand as a performer. For me, out of those three, acting is definitely the most challenging. Watching plays or movies and seeing great actors—they make it look easy. And then you try and you’re questioning how do you get all these emotions and make it look so simple. But I feel like that could be said of all three skills.

At Colburn, it’s differed throughout the years. This year we have a dance class that is more of a warm-up, but it’s also for technique. We also rotate between a ballet class, a modern class, and a jazz class throughout the year. All of those genres are very important in musical theatre, so to have all three in one year is incredible. We also have a singing class and a singing for acting class called “Acting the Song”, which is more technique focused. How do you get a song or a solo song, and then how do you build that so that you can bring in emotion with your character and make it look like a professional performance. And then we have choreography. Throughout all of these, usually by the end of a semester, we build a few musical numbers and we get to perform them, which is great.

Speak further about “Acting the Song”?

This year it’s a completely different class on its own. Basically, we get a selected song and sing it, then we receive a lot of feedback from our singing and acting teacher. We get a lot of notes on how breath work should be done, what you’re truly saying, and a bunch of feedback on technique. It really helps build the foundation of the song that you’re singing, rather than just making it sound good.

All of these classes, and musical theatre as a whole, sound like they take stamina. Do you feel like you’ve had to athletically train for this?

Definitely, I would say so. It’s a lot to put in, but it’s very enjoyable and, no matter how tiring it may get, I’m still satisfied that I’m doing it.

Are you taking any other classes at the Community School?

How has your experience been with Colburn faculty?

I’ll give a shout-out—Denise Scheerer has been basically my mentor for the longest time. She’s always there for me, always helps me with whatever dance or musical theatre thing I need. I definitely look up to her, she’s wonderful. Mike [Stevens] is a great voice teacher. He’s fun to be with. And then Lea [Floden], our acting coach is so good at all the things she teaches us. And it’s a lot sometimes; it’s very challenging, but I know it’s very important and I know she wants the best out of me and my classmates.

Are there any classes that you’ve enjoyed in particular?

I mean, they all stand out! In a way, Colburn is like a second home to me. I’m there all the time and I take a lot of classes, and I always enjoy it. So in that way, every class is very special and memorable, even if there are challenges or struggles.

What do you hope to get out of your time at Colburn?

Since I am a senior and intending to graduate and go to college, I don’t have a lot of time left at Colburn. It’s a little sad, but I’m hoping to achieve the most out of myself while I’m here. I just want to be satisfied with where I will be by the end of the year as a performer. And Colburn—it’s the reason I am the performer that I am, so I definitely want to express that to the fullest by the end of the year.

Where do you see yourself after Colburn?

I think a musical theatre program, and then Broadway is where I’m really looking to as a career.

Is there a dream role that you’ve always had in your mind?

Well, when I was younger, my dream role was Billy Elliot. I am now too old for that, but I’ve done a few productions of musicals where I would love to be a character but on Broadway. I would love to be Riff for West Side Story or Mike from Chorus Line.

Any wisdom to pass along to future musical theatre participants at Colburn?

It’s a wonderful thing, this talent; I just think musical theatre is such a treat, a gift to have, since it’s considered multi-disciplinary. To have the opportunity to be able to sing, dance, and act at the same time—no matter if you’re better or worse than the others— it’s still amazing to see how much you can grow. And don’t be afraid to fail! It’s a hard thing to do, you might feel like you’re embarrassing yourself, but we all do it, and it’s important because that’s how you grow. Have fun with it too.