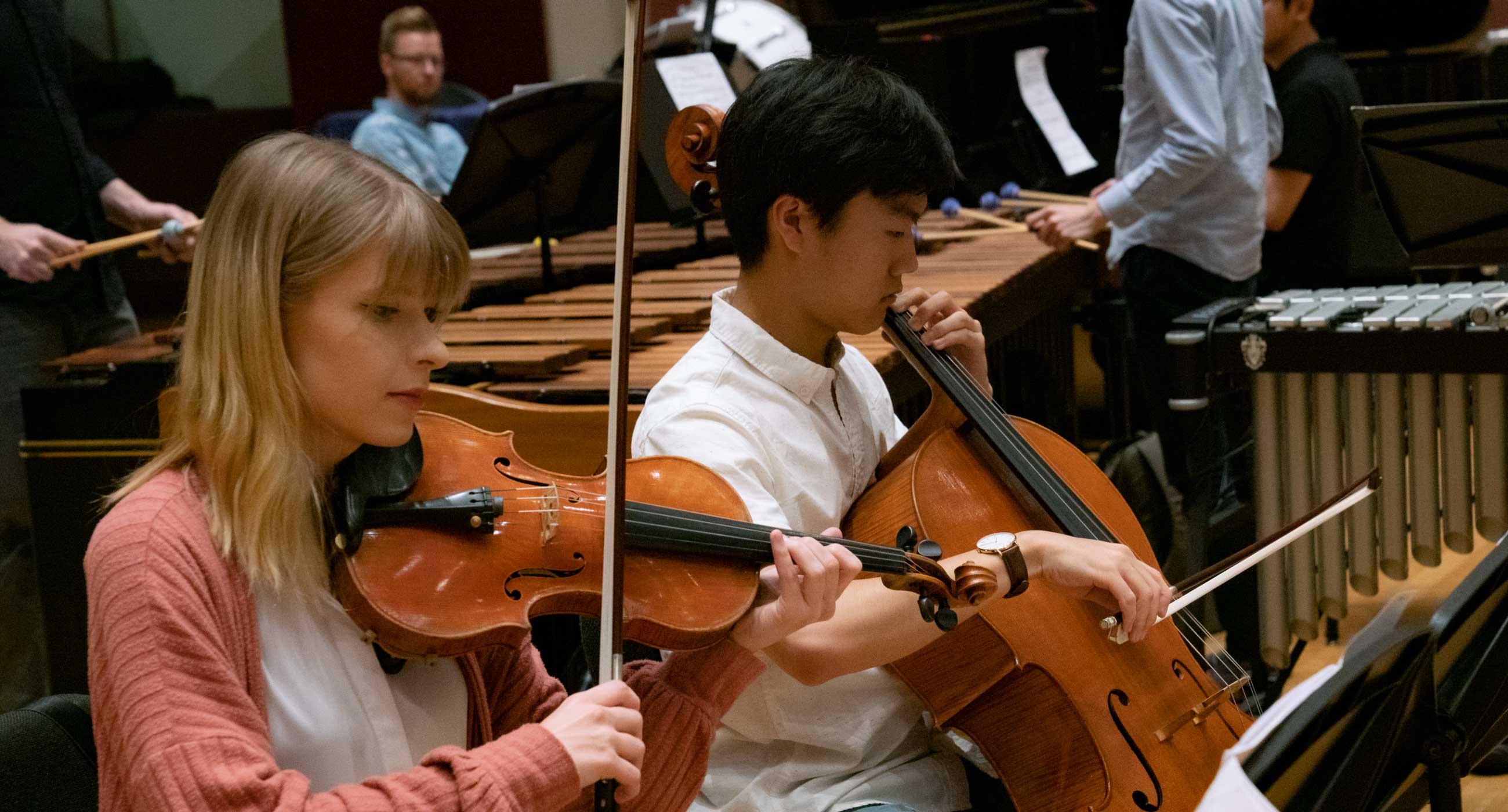 On October 24, the Conservatory’s Contemporary Ensemble will perform Steve Reich’s Music for 18 Musicians on their first concert of the season as part of a new partnership with Airbnb. The hour-long piece will feature piano, marimba, vibraphone, xylophone, clarinet, bass clarinet, violin, cello, and vocals. Audience members will be able to enjoy wine while listening to the transformative work. Afterwards, Ted Atkatz, the group’s director and the evening’s host, will lead a discussion with the audience and performers.

Colburn’s participation in Airbnb Experiences will bring new audiences to campus and introduce them not only to contemporary music, but also to Colburn’s high quality of performance. The concert will be limited to 100 participants; $10 tickets will be available on the Airbnb’s website for purchase in the near future.

Read an interview with Ted Atkatz to learn more about the experience, minimalist music, and the value of unconventional performances.

What led you to choose Steve Reich’s Music for 18 Musicians?
I’ve always been fascinated by Steve Reich’s music. This piece requires four pianos, so I was thrilled to be able to involve [more pianists] with this work. It’s a bold piece in terms of its length, the instrumentation, and its intentions.

I thought it would be the kind of piece that the students at Colburn would be eager to take on and that we have an audience for here in downtown LA.

Can you tell me about minimalism and where Steve Reich was writing from?
He was experimenting in minimalism. He had a group of musicians and he would write sketches, so the score that we worked from is [an] incredibly different style of writing. It was essentially a somewhat organized improvisation for the 18 musicians.

[Steve Reich] experiments with minimal changes in tonality, changes of instrumentation, and augmentation and diminution. Many times, it’s really just about the adding of space, instruments, or notes to slightly change the texture.

It’s [like] the way you look at a pointillist painting up close and it makes no sense, and as you get further away you begin to see all the contrast. But at first glance, it’s just dots.

[The piece is] percussion-based so there are seven percussionists. Rhythm is at the heart of it, and the improvisation is more centered around rhythm than tonality. But the beauty of the music is when the tonality does finally change, it’s like the colors of the work completely change.

What do you think is the educational benefit of Colburn students taking on this piece?
Many of them have never performed minimalist music before. This is an experience that they’re likely not to have again in their careers because the landscape of music as a whole is changing so drastically—so much so that it’s hard for educators to know what that direction will be for their students five and ten and twenty years from now.

The thing that stands out to me is that more and more musicians are required to show their versatility in terms of the instruments, styles, and venues that they play. Concerts are now being staged in restaurants, bars, theaters, and outdoor amphitheaters. The concert hall remains a place for performances, but now those are just a portion of the venues where musicians are performing.

What do you think an audience will be able to appreciate about this work?
I’ve read a lot about peoples’ reaction to this music and something that stuck out to me is people said things like ‘I listened to this piece on repeat while driving from Cleveland to Miami in the darkest period of my life, and it got me through this terrible time.’

People talk about composing art, painting, while listening to this music. It has a meditative quality. There’s this ongoing churning of rhythm, and yet it can almost feel like a still life painting. So depending on your mood, your willingness, and what you tune into, you can either feel this as an overarching picture or you can listen to the minutia, which is individual players playing their parts.

I heard a rumor that you’re performing this in the round. Can you explain what that means and what led you to that decision?
In keeping with what I just mentioned, I wanted the audience to have an interactive association with the music and with the performers. The idea of having it in Olive Rehearsal Hall… First of all, it’s a room that’s big enough for the group, being that it has four grand pianos, three marimbas, vibraphone, two xylophones, two clarinets, bass clarinet, violin, and cello. So the space is large enough.

We’re setting up the group in the center of the room allowing for space for audience members to move around the room to experience the music from different angles—not only visual, but auditory angles. Things will sound different as they move around. They can also get a close look at exactly how much focus is required of each musician to perform this piece.

And Reich is not for everybody. At every performance of Steve Reich, there’s oftentimes a love/hate relationship that the audience has en masse. Some people are completely enraptured by the music, and some people hear twenty minutes and that’s enough for them.

It’s the way it would be if you were to go to a museum and walk through a gallery. Certain people are drawn to certain elements of that gallery. So if they don’t like it, they’re welcome to walk out [laughs].

The overall concept is that they can experience a bit of what the musicians are experiencing. They can hear the music from different angles and see it visually, and they’ll hopefully have a better understanding of how the music works.

Are you intending it to be like Einstein on the Beach (a five-hour long opera written by Philip Glass) where people can come and go as they please?
Yes, that’s part of it. Obviously the hope is that people are interested enough to stay through the whole thing, but it definitely challenges the first-time listener to find its meaning. But like many great works of art, it’s often the second, third, and fourth listening that bring true understanding for each viewer, or each listener.

So yes, it’s in part this idea that people may come and go as they please, and also the reason that we’re serving wine. There’s a bit of an informality of the experience so that it can serve as an introduction for someone that’s new to minimalist music or the music of Steve Reich.

Does that tie in to what you were saying about how classical music is moving more towards being in non-concert hall spaces?
That’s part of what I was getting at. I think that over the last ten to twenty years, my professional experience has brought me into more and more performances outside of concert hall venues. Nontraditional venues are becoming more and more commonplace. It is important for Colburn students to take part in these unconventional performances, and this will certainly be one of them.

What’s been really fun over the years we’ve been doing it is to see the repeated involvement of particular students who are really falling in love with contemporary music, some of whom had not played any contemporary music prior to their first performance with the Colburn Contemporary Ensemble.

I think that our musicians are really superior, and I think that they come to this music with open, fresh minds. There’s an audience in Los Angeles that’s really going to embrace this group and these musicians. So I want to continue to grow this ensemble and see it be appreciated.

Is there anything you’d like to add?
Come early and stay for the whole thing. I would say for those that are new to this music, expect something different and be willing to be open to it.

The other thing that I’d like to do at this concert is to have a [Q&A].. My hope is that we will have some short discussion prior to the performance and then have questions and discussion after so that audience members can speak with me and with the other musicians [who can also]  talk about their experiences in playing it.

One of the reactions that non-musicians and musicians have to the performers is ‘how did you do that?’ Because the level of concentration required is really unique.

Tickets for the Contemporary Ensemble performance will be available on Airbnb soon.