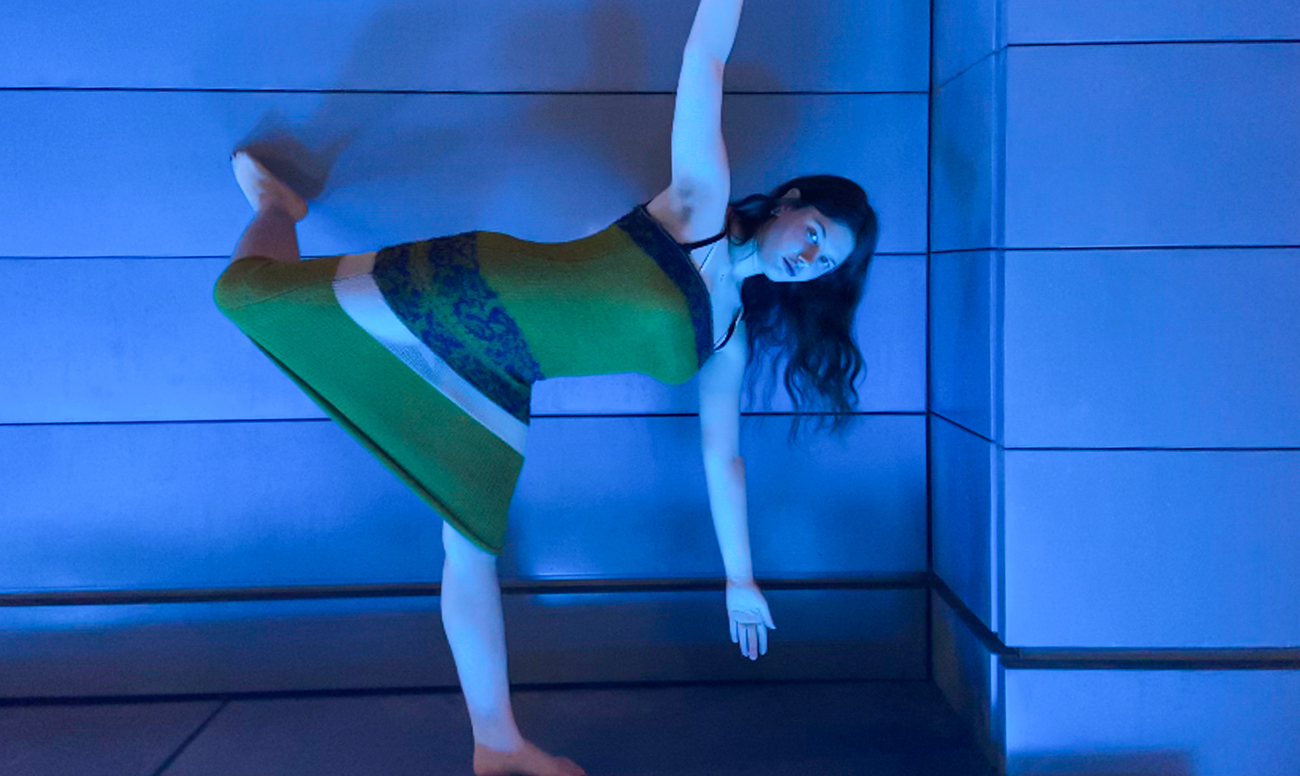 Who has influenced your personal dance journey?

My mom is a dancer—Tamsin [Carlson, Modern and Creative Dance Chair at Colburn]—so I did ballet when I was young. Back then, I don’t know if I was rebellious, but I became kind of averse to it and didn’t dance for a while. In seventh grade though, I just decided to go for it and started in Horton technique. In eighth grade, I moved into the modern four class when I started in the Cunningham style.

Do you have a favorite genre of dance?

I focus mainly in modern, and within that bubble, the Cunningham technique is where my heart is. It just feels right. It’s still ridiculously difficult, but it feels more natural to my body. And even when it’s not natural to my body, it’s natural mentally. The way it’s performed, the way I can think about it; it feels technical and simultaneously personal, abstract, and still human, more grounded and real in a way. I feel like Cunningham is less about conveying particular emotions and more about expressing who the dancer is on stage and the ideas and communications between the other dancers, whereas Graham feels more inwardly personal.

How is modern dance different from other dance forms for you?

I honestly don’t know if I could define how modern differs from contemporary; I just know it’s different. It just feels completely different to do and to watch and experience.

Ballet for me is so difficult because I just don’t get it. I think modern allows you to move with your own physicality; in ballet, leg height for example is emphasized, whereas you can work within your own framework a lot more in modern. Of course you’re still trying to improve upon it, but you’re allowed to be more yourself.

I also feel the transitions are kind of overlooked. It seems ballet is more about getting shape to shape and movement to movement, whereas in modern, the transitions between more large sweeping movements are just as important as the shapes themselves.

It’s not to say that modern’s not performative, but ballet feels kind of like excess to me sometimes. I feel like ballet’s trying to convey an idea that’s not necessarily there, or elevate everything just to be prettier, whereas I feel modern is more raw and trying to embrace the mundane, the actual happenings of the world.

How would you define or express the meaning that dance has had on your life?

It’s definitely allowed me to connect more mind to body, and I so appreciate that. I not only feel grounded literally, but I feel more of a connection to the Earth, because dance as an art form has been around for so long. I like the idea of carrying it on while simultaneously innovating and pushing forwards.

I like the cross between mediums as well, as I also create visual art. Throughout his career, [Merce] Cunningham worked alongside and collaborated with artists of all different mediums. You always rehearse in silence, right? So he would work with John Cage[, an American composer,] a lot. And costume wise, he collaborated with Jasper Johns and Robert Rauschenberg—and then there were the set pieces! So the dance was the dance alone, but it still worked in tandem with other things. I like how they worked alone and together simultaneously.

Recently I created these wooden shoes made to be two-person shoes. They’re really long. So there’s a person standing in front and one standing in back, and you walk in tandem with the other person. They can’t be worn alone, so you have to have someone else with you walking.

I’m sure my art does play a role in how I dance, but I can’t pinpoint how. But a lot of my work doesn’t have a meaning to it at first, and I find it along the way, so I’m sure it’s the same with dance. There is a reason to why I’m moving the way I do, I just don’t know what it is. And I’m also okay with not knowing.

Did you participate in the week-long Mercer Cunningham Trust visit? Was this your first time participating?

Yes! This is the first experience I’ve had that was this condensed. Silas Reiner came and we learned “TV Rerun.” We basically learned the entire piece in one night.

I feel because I started dancing so late, the only way I could keep up was to just go for it. The way I describe my dancing is I throw my body at the movement. When I was younger that appeared almost aggressive, but I feel like this time around I feel more secure. I am still throwing my body at the movement, but with more control and purpose behind it.

The Trudl Zipper Dance Institute is participating in the upcoming “Joy: A Winter Dance Celebration.” As you’re probably aware, this a special holiday event party raising funds for the dance program. Will you be dancing in Joy? Are you able to share how you’re preparing?

We’re [modern dance] only performing a piece from The Nutcracker for Joy! It’s kind of interesting—it’s the opposite of Cunningham because the music is assigned and we choreograph to the music. In rehearsals, we start with a run and then do notes. The way my mom [Tamsin] works is kind of fluid. She changes things all the time, so you can’t really get attached to little moments in the piece because they might be cut. So we’re looking at time constraints, extending things, cutting things. We also try different variations of the piece, so we might run it three times, all different variations just to see.

What are you looking forward to in the rest of the 2022–23 school year?

With this being your last year at Colburn, what’s on the horizon?

Oh, college! I’m applying to a lot of different places with different focuses in mind because I’m interested in dance and art, but also science, astronomy in particular. I’m trying to live how I actually want to live, rather than a life I think I should be living because of societal ideals, which is why I want so many options. I know I love dance, art, and science; I just know I don’t want to get stuck doing something for someone else’s sake. We’ll see what happens. I’m just going to see what comes my way.