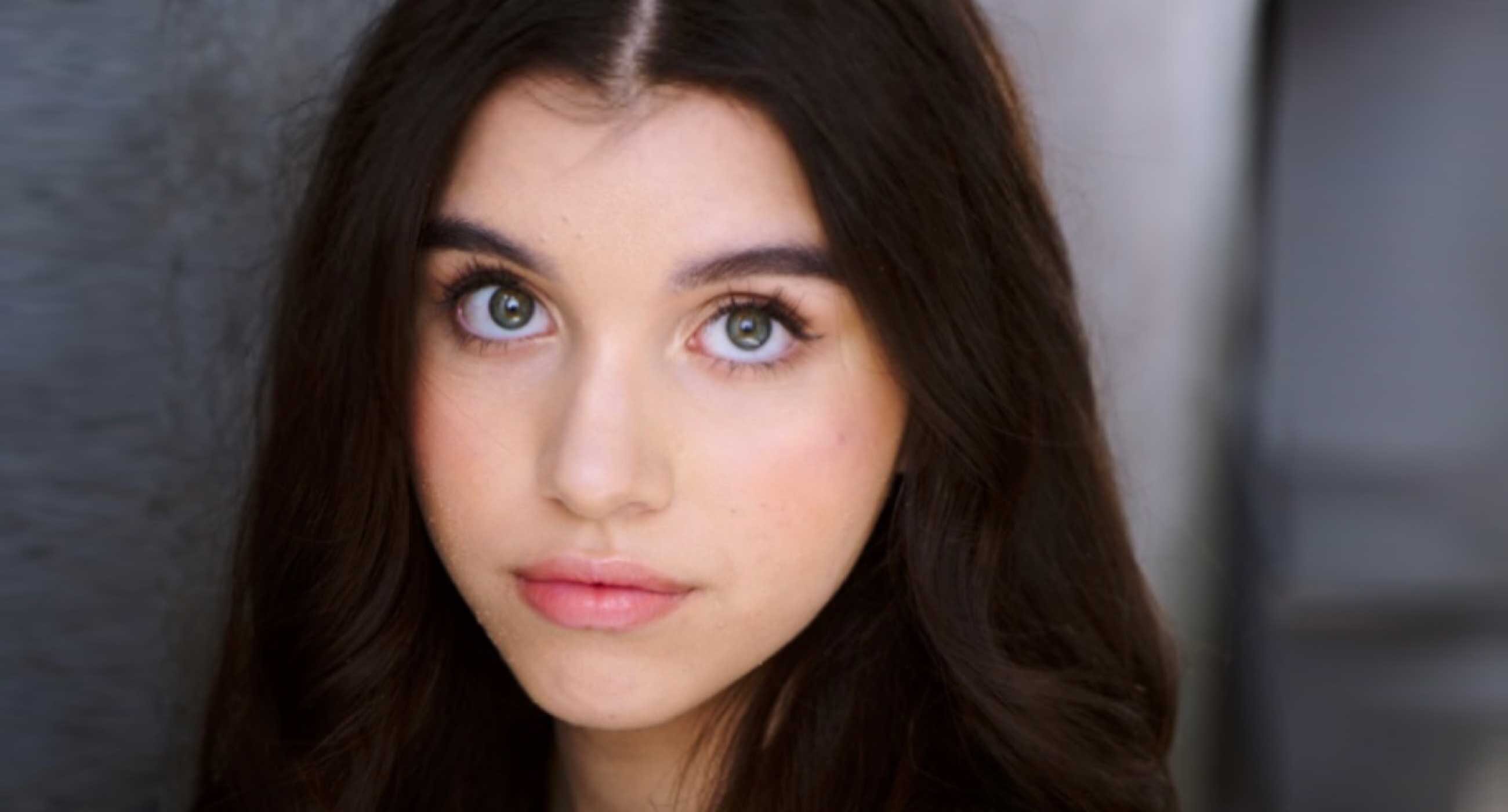 Giovanna Martinez, 16, is in her second year at the Colburn Dance Academy. In addition to ballet, she is also an accomplished singer, actor, and songwriter.

How did you get started in the performing arts?
When I was younger, I would always run around the house, so my mom thought it was a good idea to put me in ballet. I started ballet when I was three at a community dance studio. Then when I was around 10, I started getting more serious about ballet, so I moved studios to a more professional one. At 12, I actually discovered musical theater. That’s when I did my first musical theater performance, Beauty and the Beast. I played Lumiere. I went on to perform more roles such as Wednesday Addams in The Addams Family and Millie Dillmount in Thoroughly Modern Millie. I just enjoyed being on stage.

Something about musical theater that’s different from ballet is that you can use your voice. When you no longer have any words to say you can convey emotion through song. I like having that option. Ballet is very different. You don’t get to talk so every emotion must be conveyed through your face and body language. I love and see the value in both.

How do you see the two genres overlap?
I have seen many shows on Broadway with ballet in them. I love it when they incorporate ballet because it is the perfect mix for me. One of my absolute favorite shows that I have seen on Broadway was Carousel. It was choreographed by my favorite choreographer, Justin Peck. I was at the edge of my seat the whole show. I just could not get enough. His choreography is mesmerizing and brought in the perfect mix of ballet and theater. They also brought in some [New York City Ballet] dancers for the run of the show, which I thought was so cool because they are living my ideal life of being a dancer and on Broadway at the same time.

Elements of theater are also brought into ballets with some sort of a storyline. I love these ballets because I can bring my acting skills to them. Another one of my favorite choreographers is Jerome Robbins. His ballets are very theatrical, so I tend to gravitate towards them.

How did you find your way to Colburn?
I always loved and preferred the Balanchine technique, however my dance studio at the time was very classical, and I would often find myself wanting more leeway from the basic classical ballet so I could express myself without restrictions.

I had a friend that went to the same dance studio at the time, and she moved to Colburn. I ended up auditioning for Dance Academy and got in. I was so excited to be able to dance Balanchine technique with such amazing faculty. Once Covid hit, I ended up doing my first year of Dance Academy on Zoom. Though not my ideal year, I learned so much and felt very strong when it came time to join my friends back in the studio.

How have your classes been going so far this year?
It’s been great. It’s definitely different being back in the studio around all my peers. I feel like the energy is so much different than just being in your room by yourself. We used to have a slightly modified schedule so we wouldn’t be so hard on ourselves during Zoom, but now we’re back into the full schedule and I am loving it.

How do you think your training at the Dance Academy will help you in musical theater?
I always say that ballet is the root of all styles because it helps you with everything. Once you know ballet, you can merge into jazz, contemporary, tap, even hip hop if you want to because you learn how to find your place of center. Also, I think the more skills I have under my belt, the better, because you never know what a show calls for. So it’s great to learn as many skills as possible for the highest chance of booking a role. When I look back on the best opportunities I’ve had, it’s because of my dance training. It really does make a difference.

What are you working on right now?
Right now, we are going to be the first students to do The Goldberg Variations by Jerome Robbins. It’s very exciting because we’re some of the very few dancers that have gotten to do this material. It’s very challenging to say the least. So, we’ve been working very hard in the studios to put on a great show. I just love Jerome Robbins’ work so it’s very exciting to be able to do one of his ballets.

How would you describe The Goldberg Variations to people who might be unfamiliar with it?
It’s very fast paced, even for the pianist. The steps themselves aren’t very far off from a regular ballet class but they’ve got that classic Robbins spin on them that makes it so enticing.

There was also a student choreography show at the end of the semester. Would you speak about that?
Last Saturday, we showcased our works. I was very excited when we first heard about this project. I love choreographing. I usually choreograph for myself for fun, and I’ve even gotten the opportunity to choreograph a few numbers of Annie the musical for a local theater. I love exercising my creativity and showcasing my ideas. My piece is called City Strut with music by Benny Goodman. It’s a very jazzy solo heavily influenced by George Balanchine’s Who Cares?

What else have you been involved with recently?
In September, I had the opportunity to play Diana Morales in A Chorus Line at the GEM Theater in Garden Grove. That opportunity came out of nowhere. I saw a Facebook post saying ,”We’re looking for a Diana in A Chorus Line,” and I thought to myself, “Wait, I’m perfect for Diana.” Though I was a bit young for the role considering she is 27 and I am 16, I still went out and auditioned anyway because I had nothing to lose. I ended up getting the role on the same day that I auditioned.

We had rehearsals for about two weeks and then we went into tech for another week. We had a four-week run, and it was probably the best experience of my life. I’ve never been a part of a cast that has been just so caring towards each other and so talented. The show itself holds such an emotional place in my heart because the show was based on real stories. Singing “What I Did for Love” every night brought me and the audience to tears, and I loved feeling their energy.

That sounds incredible. What was significant about that experience?
I feel like I really grew as an actor and person during that time. My director, Damien Lorton, was absolutely amazing. He really knows how to bring out emotion from all of the actors. He took a scene and turned it into something that I had never thought of before. I’m very grateful for him and my cast mates. I’ve learned so much from just watching them perform. This is the first time I have done a show with only adults around me. I was the youngest in the cast by far; it was very different. When I first walked into the theater, I was terrified, feeling like I had to live up to their expectations, but they reassured me and built me up.

What’s your dream role?
I have a lot but to name a few dance-wise, I would love to be in Slaughter on Tenth Avenue, Who Cares?, and Carmen. For musical theater, I would love to play Maria in West Side Story, Nina from In the Heights, Anastasia in Anastasia, and Natalie in Next to Normal.

What drives you to keep going with your art?
When I was younger, I had a hard time with kids at my school. I was bullied a lot and made fun of for having these big aspirations. I always found that interesting because I had big dreams for my future, but other kids thought that was weird and were dragging me down for it. I ended up switching to homeschool when things got too hard at school. My dance schedule was changed to the morning, which was better for me in the end because I got more time to train that way.

There is a flame in me telling me to keep going no matter how many noes I receive and no matter how many people are trying to drag me down because there will always be people trying to drag you down in this business. What matters most is what you do about it and how you take that negativity and make something wonderful. So, I will not take no for an answer. I will keep going until I get a yes.

Do you have any advice for dancers younger than you?
Someone else’s success is not your failure. Spending all your time upset about the things you don’t receive doesn’t do you any good. You can still be a bit disappointed but don’t let that take over and define who you are. Just keep working hard and eventually everything will fall in line.

Special appreciation goes to the Colburn Society members whose annual support is directed to the Trudl Zipper Dance Institute, including the extraordinary generosity of Ann Mulally, David Kobrin, Aliza and Michael Lesser, Lucy Farber and Jim Bright, Mazie and Gabriel Hoffman, Anne and Jeffrey Grausam, Meltem and Mehmet Ozpay, George and Linda Cassady, Susan Friedman, and Layla and Gac Kim. To learn more on how you can support our students, contact advancement@colburnschool.edu.