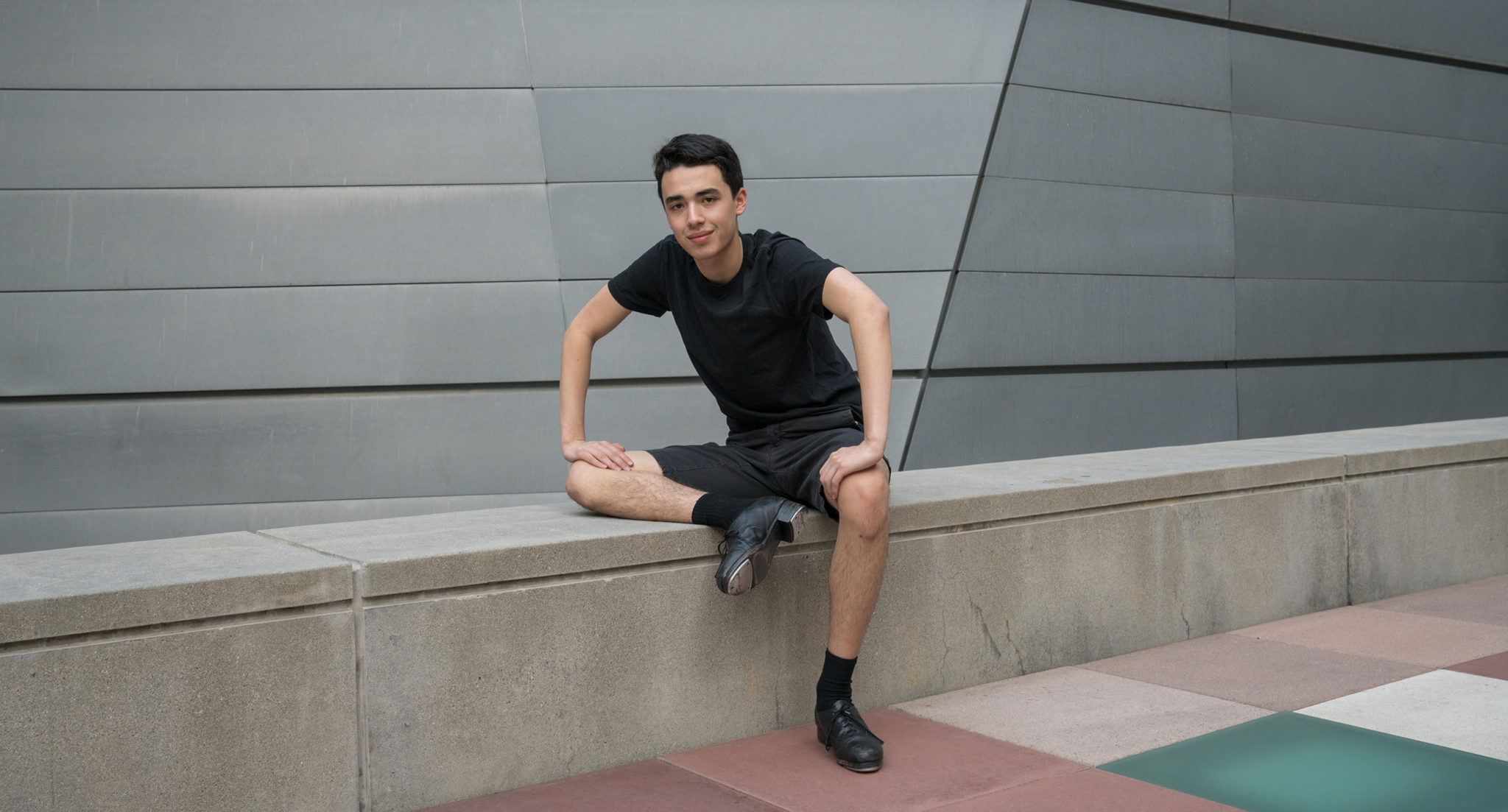 Joe Lesher-Liao, 16, has been taking tap at Colburn for eight years with Denise Scheerer and Melinda Sullivan. He is a sophomore in high school and grew up in Los Angeles.

How did you discover tap dancing?
My mom made me take dance class when I was a kid, and I told her that the only style I was willing to take was tap, so that’s how I started. I liked it and I stuck with it, and a few years later, I really got into dance. From tap dancing, I branched off into other styles of dance, like ballet, modern, and contemporary, but I feel like tap dancing has always been my rock.

You’ve been at Colburn for eight years. How has it been?
It’s been good. I feel like I’ve gotten really good training as a tap dancer here which is uncommon, especially with all the music theory we’ve had to learn from Denise. We also have live musicians in class like Blake, the drummer, which is such a crazy opportunity. There’s been a strong emphasis on traditional tap and history, and staying true to tap’s roots, which I appreciate.

How much music theory do you learn?
It’s basic music theory. As a tap dancer, you’re a musician and a dancer, so you have to be responsible for what you’re playing with your feet. It helps because it’s how you understand tap. If you don’t know musically what you’re tap dancing, then what are you tap dancing? It’s crazy because a lot of people don’t learn that when they tap dance, and they should.

Why do you love dancing?
It’s the easiest way for me to express myself. I’m not necessarily the most verbal person, and I like both the movement and sound that tap dance offers me. I’m not limited to either. The sound comes first, and then your body is the extension of that. I always find it interesting watching musicians play, especially watching harp players. Their bodies are so expressive. Tap dance is like that too, where you feel like an instrument and your entire body is a result of what you’re playing.

Your tap concert is next week. What has it been like preparing for that?
I’ll be performing a solo that I choreographed. It’s a love song, set to “I Was Doing Alright,” an Oscar Peterson recording. It’s pretty chill, pretty relaxed, and mellow. Or I might do something else. I have another piece to a Thelonious Monk piece called “In Walked Bud,” and that’s all about sharing and joy.

We’re also doing some ensemble pieces. We’re doing a couple pieces to Bach, which are interesting. One of them’s kind of strange, but it’s good. A lot of them are repertoire pieces, so we’ve been doing them for a couple years and we know them really well. We’ve learned a couple new pieces though, like the Bach pieces and another to “Fascinating Rhythm” and “I Got Rhythm.”

But I’ve been kind of out of it because I was in Miami last week for YoungArts week. I was a finalist for dance, one of twenty dancers. We went out to Miami for a week of performance, artistic development, and master classes. It was incredible. There was only one other tap dancer, so we were working pretty closely with a dancer called Marshall Davis, Jr. and it was very eye opening to how I tap dance. I became much more aware of the things I do, the way I sound, my tone, and my intent. That week opened my eyes and now I get to come back and figure out who I am.

You also assist Melinda Sullivan with her younger tap class. What has that been like?
It’s only been a couple of months, since October or November, but it’s interesting. Eight year olds are a piece of work. I like being there and watching them learn, because they’re like sponges when they’re so young and they learn very quickly. They’re a lot. They have a lot of energy. It’s very tiring and draining, but I enjoy it.

Do you want to teach later in life?
Yeah, for sure. Especially tap dance, because that’s how you pass the art form down. You have to teach and share what you know with the younger generation, otherwise it’s gonna get lost.

What are your interests outside dance?
I feel like dance takes up so much of my time. It’s my main hobby. But I see a lot of movies for sure, a lot of kind of weird movies. I also like when we do art at school. Dance is so time consuming. I’m only here two times a week, but I practice and dance elsewhere. I also practice at least two hours at home by myself everyday, so that takes up time, and then I have homework.

But you’re going to keep dancing?
Yes, that’s what I’m going to be doing until the day I die.