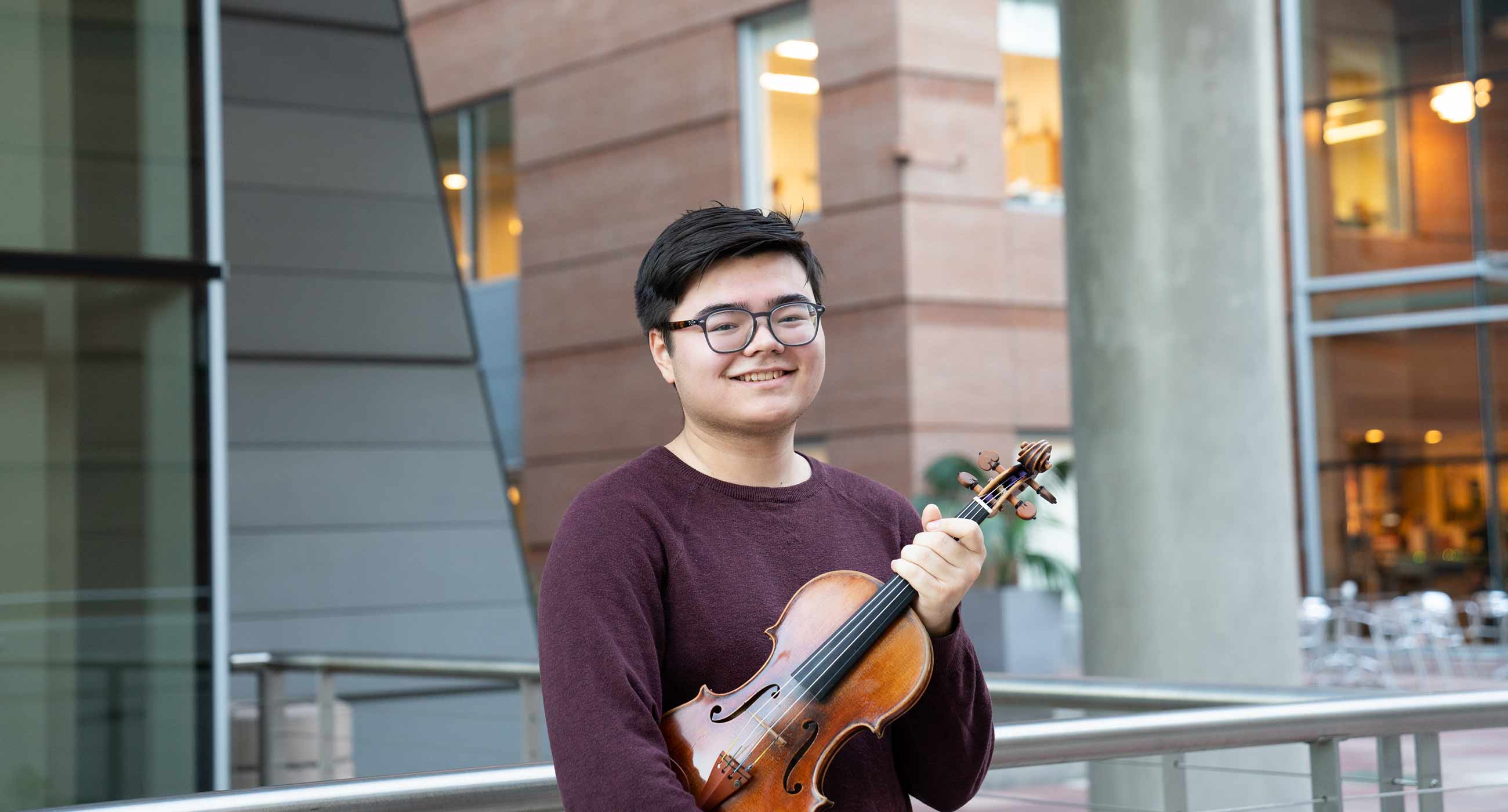 Evan Llafet, 17, is in his first year at the Music Academy studying with Henry Gronnier. He is from Vancouver, Washington.

Why did you decide to come to Colburn?
I knew that I wanted to be a musician and I thought, if I really want to do this, I know that Colburn is a way to become one of the really great players because I’d seen it happen with people in my own community who go off and become amazing players.

So I remember years and years ago knowing Colburn was where I want to go when I finish high school. Then, the summer between sophomore and junior year, I went to the Montecito Festival, where I met my teacher here, Henry Gronnier. We worked really well together and I really liked him, and I knew that I wanted to study with him further.

When I finally found out that I got in, there wasn’t really any question, I knew I had to go. I worked really hard to try to get all my senior year requirements finished early because I knew that if I was gonna make this huge change and move here, that I wanted to be totally focused on my music and not have to try to do school at the same time. But to stay academically engaged, they let me take the freshman humanities course in the Conservatory. It’s really really fun actually, because Gwen Robertson, the professor’s really engaging.

How has Colburn been so far?
It’s been exactly what I knew it was going to be. A lot of hard work and a lot of pressure, but pressure and hard work that I could handle and that I was ready to take on. I’ve been practicing more consistently and more than I ever have, which has been a good test of my discipline. I’m really proud of myself looking back on the semester to see how much I have progressed.

I love working with my teachers still, that’s been great. I love my studio-mates. We all get along well. The nice thing about Mr. Gronnier’s studio is that because he doesn’t teach in the Conservatory, we get to play every week. A lot of the other kids observe a lot and there’s so much to be said for both observing and playing, but we get to play every week and get feedback every week from our peers.

I love playing in [the Academy] Virtuosi, the chamber string orchestra because Ms. Batjer is amazing, to get to work with the concertmaster of the LA Chamber Orchestra. Every week is an amazing opportunity. I’ve never played in such a high level ensemble.

Do you know what areas you’d like to focus on with your music?
I think, more than a lot of my peers, I have indecision because I study voice with Thomas Michael Allen at USC and I’m applying for both for college. Last year, I did YoungArts for voice and I won for boys and so I was like, I love this a lot too. To me, they’re both such important facets of music and for me as a musician, I couldn’t really give up one or the other, at least I don’t know right now. So I’m applying for both.

Nate Zeisler came into the freshman class, and one part of his job is to talk to us about our future plans and how to be smart about the realities of trying to make it in music. I just thought his story was so interesting, about how he has a doctorate in bassoon performance. He had tenured professorship and played in a great orchestra, but then he decided to go into arts administration and be involved here and do that, and he’s super fulfilled doing that.

That was kind of pivotal in my thinking where I was like, as long as I’m engaged in the arts and making a difference through the arts, I can’t really block out anything right now, especially at 17. Right now I’m focused on performance and I would love to make it in performance, but arts engagement in general.

What’s it like studying violin and voice at the same time?
It’s tricky, because violin is such an easy thing to become obsessive about. It’s an easy art form to make an obsessive part of your life. And my number one goal beyond just improving at my craft is to be balanced in my craft, because I’ve seen it in other people and I’ve seen it in myself: when you just become too unbalanced and you’re not taking care of yourself and you’re not aware of your emotional equilibrium.

How did you get into music?
My mom is a piano teacher and a pianist, and my dad is a jazz and improv pianist, and so there was always music in the house. My mom took me to Carnival of the Animals when I was six-ish and they do instrument petting zoos at the end and I immediately gravitated to the violin and I just scratched away and I thought I sounded great. I begged my mom to let me take lessons.

I take a lot of pride in that because I love the fact that I had autonomy in picking my instrument, because a lot of people don’t, and it’s been forced on them. But my parents have never made me practice. I remember they used to bug me a lot about it, but they never forced me to, so it had to be my own choice to start practicing and I had to really want it for myself.

When did you start singing?
I’ve been like, “singing” before violin, it was always my first passion. Growing up, I did a lot of musicals and stuff and choir and then I started taking voice lessons in middle school. All in high school, my summers were devoted to orchestra festivals and string festivals. But then last summer I did the Schmidt Vocal Institute, which is an opera emphasized program and I got to work with the head of the vocal department at Juilliard and sing for famous Met stars and stuff.

Even before that, I had been struggling between my two instruments because a lot of my teachers wanted me to make a choice, but that summer and the last year have really concreted the idea of both in my head. But I’ve definitely been singing just as long as violin. There were maybe a few years where I went back and forth, where I really emphasized one, but it’s been pretty consistently both.

Do you have any interests outside music?
I can’t say anything like, I’m a world-famous painter or anything, but I’m very aware of my social life. I think all musicians should have a very active social life because you need a release outside of music. So I always try to make sure that I’m spending time with my friends.