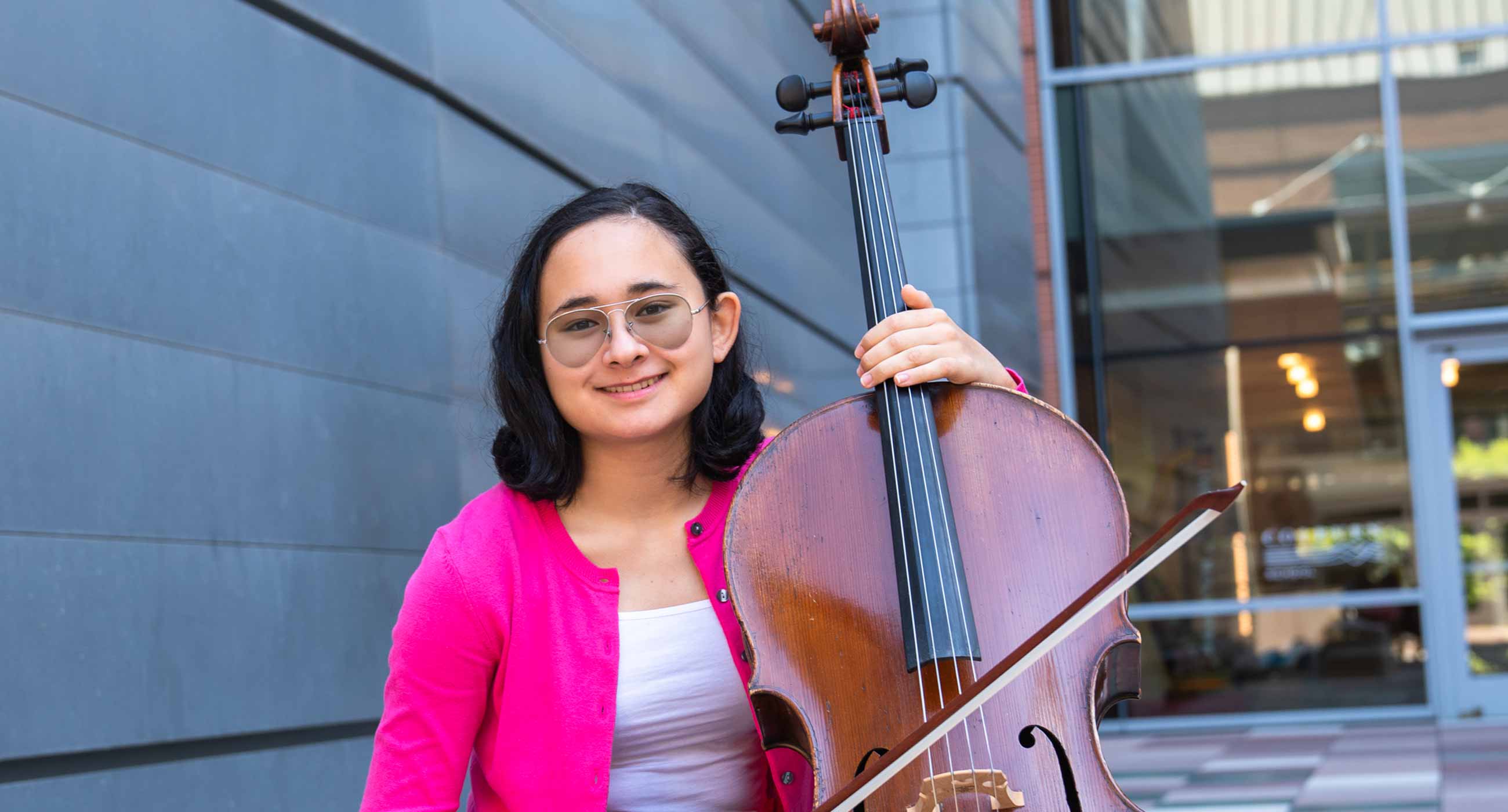 Sarah Kave, 15, is in her second year studying with Clive Greensmith in the Music Academy. She is from Tarzana, California.

What’s your musical background, and how did you end up at Colburn?
I started out with piano when I was five but I ended up switching to cello. I studied with Andrew Cook for seven years.

I found out about the Music Academy through a friend who also studied with my teacher. I wanted to study with Mr. Greensmith because I was ready for the next step in my musical endeavor.

Why did you pick the cello?
My brother’s violin teacher suggested that I start the cello so I could play duets with him. I was too busy to practice both instruments and I liked the cello more because I felt really connected to it.

Do you still play with your brother?
Yes I do. I play chamber music with my brother. Together we have done Junior Chamber Music and Pasadena Chamber Music. I am also the senior intern of the Classics Alive Ambassador Program. I organize concerts for senior homes, children’s hospitals, and underserved segments of our population. Usually I’ll play duets with my brother because the audience really enjoys it. For the past three years we have performed together at our temple during the High Holy Days.

Why are you passionate about that?
I feel like with music there’s a lot more to it than just performing for people. I strongly believe in giving back to the community in some way. I really enjoy playing music, and it means a lot more if I can help people at the same time. It’s just more significant.

How do you think playing music helps people?
I think it’s the unique personal experiences that everyone is reminded of when they listen to music. Everyone can listen to it and get something out of it. It doesn’t matter what their social or cultural background is. Everyone is equal and nobody has an advantage when it comes to what they get out of music because it’s a universal language.

What are some of the other activities you’re doing?
I started an art appreciation club at my school because art is one of my passions. Each week I have to prepare a topic that I want to discuss. I also did cross country, but the season’s over now. I am also the lead singer and electric cellist in a band. Recently I recorded a CD with the artist, Hope Levy.

Cool. How have your classical studies helped you with the band?
Well, it’s really different than what I do at Colburn. Because I have a classical background, I have a strong foundation to build off of. The lead guitarist doesn’t know how to write down music for cello but because I have the technical background, I can learn it quickly without having to read music. I also have the skills to improvise and play phrases that enhance the overall sound quality.

On the other end of that, how would you say that your outside activities influenced your classical studying?
I feel like it’s really important to do other things besides music, otherwise I wouldn’t have these other experiences that I use to relate to people when I play. I read, and I write songs which helps me on the creative side when it comes to musicality.

How do you manage the Music Academy schedule, all of the extracurricular activities you do, and everything else?
I mean, I do get a little less sleep than I probably should. I’m not the best at time management and my mom tells me to go to bed all the time! It’s tough sometimes and it can get stressful, but it’s worth it.

Tell me about the piece you played for this.
It is the Courante in the third of the six [Cello Suites] written by Bach. I kind of struggled with it at first because Baroque music doesn’t come as easily for me. I didn’t feel like I could make it as musical as I could with a different composer. I did a lot of contemplating and reflecting to make sure that the phrasing fit the correct style. The process of developing a Baroque style was very educational for me.

What was that process?
I had to work a lot on different bow techniques and my vibrato, which can get really crazy sometimes! My vibrato is usually very romantic; it’s not suited for Bach. It took some time to make it really light with more of an atmospheric presence rather than a very lush presence.

What do you want to do with your music in the future?
I like performing, and I also really like the aspect of helping people that don’t really get many opportunities to hear classical music. I also really enjoy orchestra and chamber music, so I‘m not entirely sure yet. 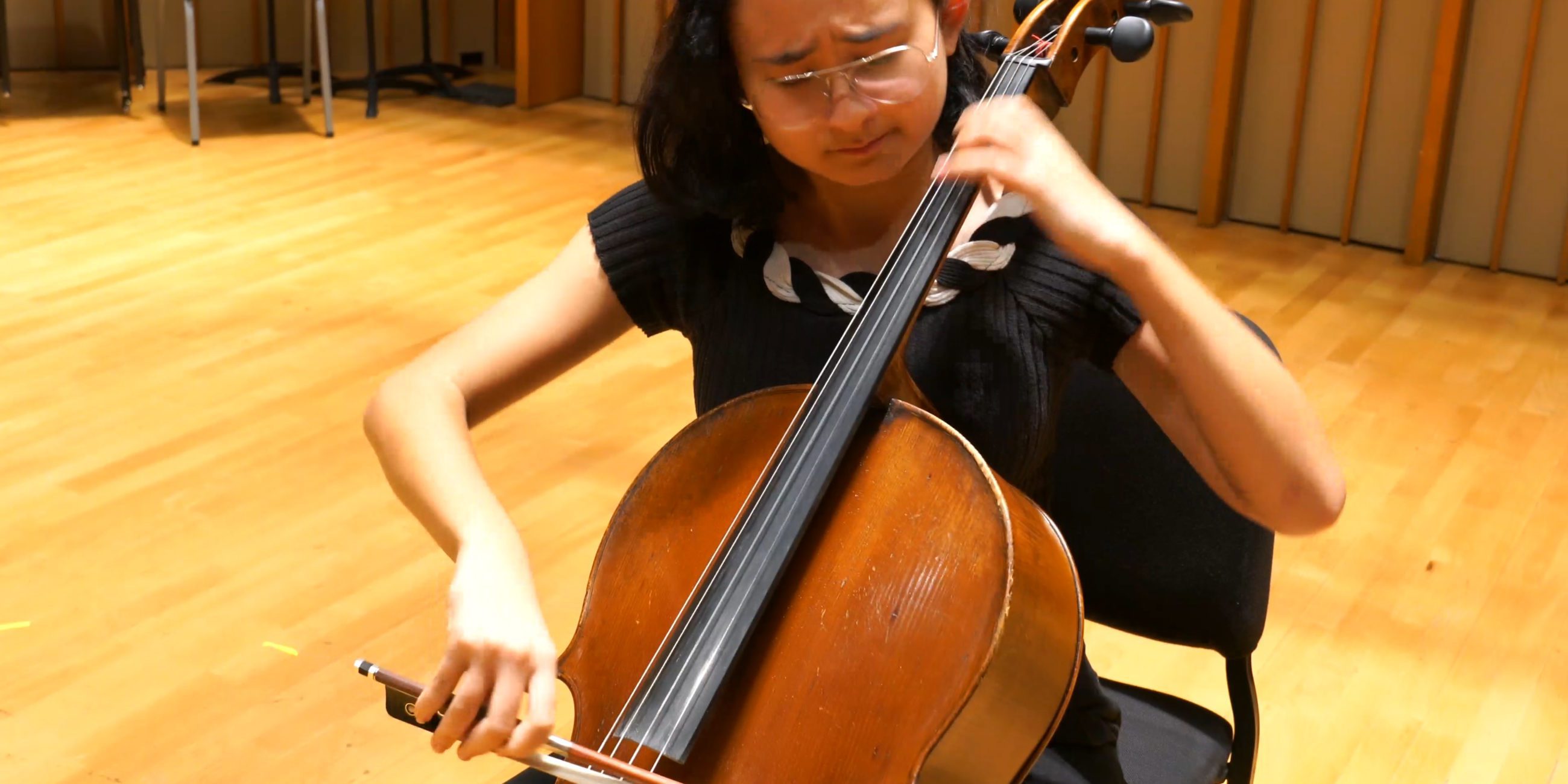