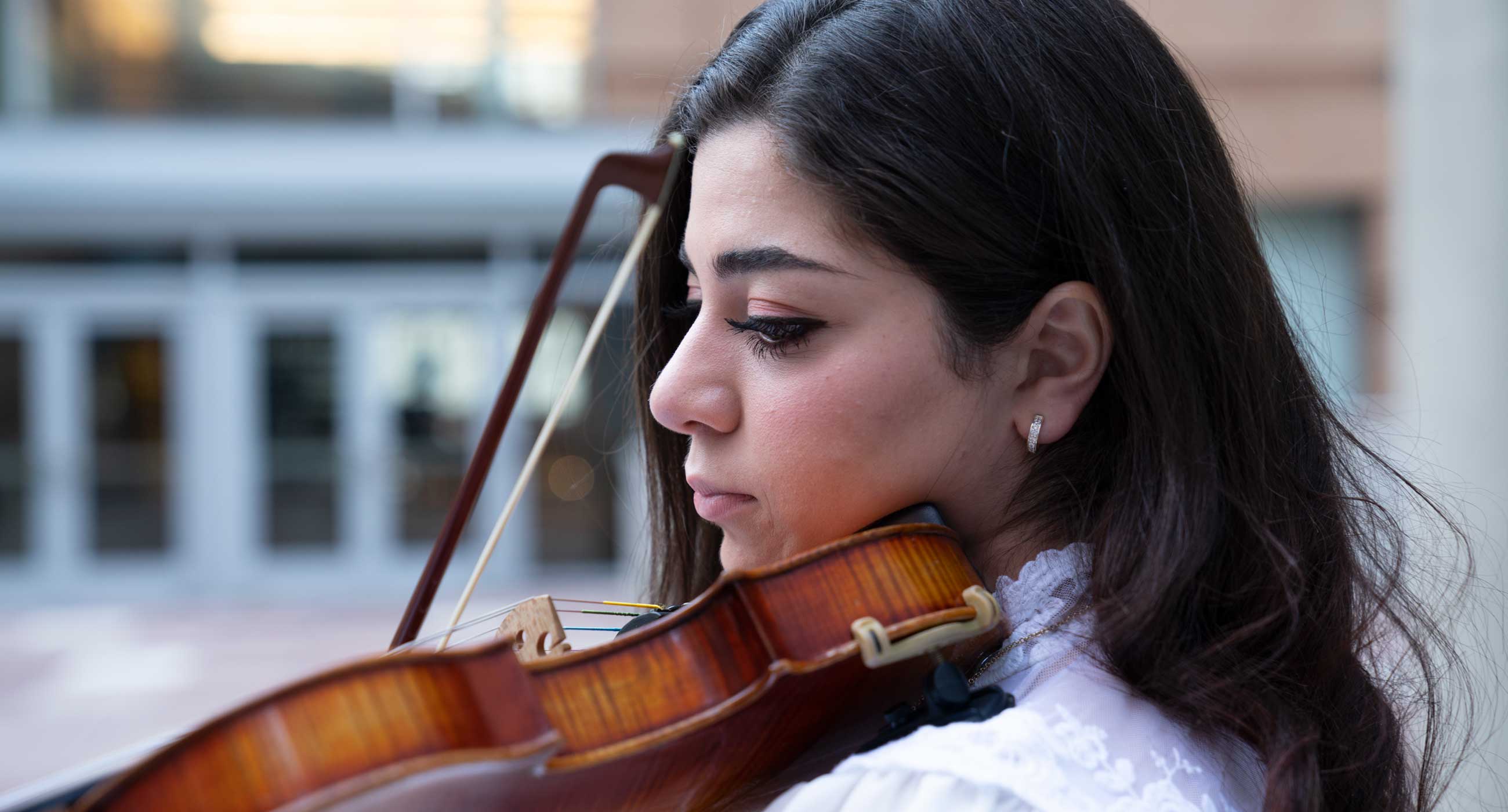 Music has helped Nanor, who moved here from Syria eight years ago, in the healing process of adjusting to a new life and culture in the United States.

Nanor Seraydarian is a violin student at the Community School, studying with Henry Gronnier. She is a recipient of the Herbert Zipper Scholarship, which offers a comprehensive music education for highly motivated and deserving students. Herbert Zipper Scholars receive instruction in music theory, private lessons, and ensemble participation, among many other academic and performance opportunities.

Can you tell me a little about yourself?
I came to the United States from Syria eight years ago. We were actually coming here just to visit my aunt, so I wasn’t planning on staying, but when the [Syrian Civil War] escalated, we had to stay. I wasn’t playing for six months because I didn’t have a teacher, so I taught myself.

My first year here, I received the Zipper Scholarship and that motivated me to work harder, because I was just starting again after taking a break for six months. I wasn’t sure what I was going to do, and music at that time wasn’t as enjoyable to me as it is now. After [receiving the scholarship], I started to grow into it. I thought of [practicing] as more than just a task—like it has a bigger purpose.

After I perform, especially when I look at the audience, and I see people smiling or sometimes even crying, I just know that music has so much power in it. Even if it’s for two seconds or two minutes, I know that it affects someone and makes them happy for that [time]. It’s like that for me, too.

When I’m super stressed or when I’m not feeling good, I come home and I practice, and it takes my mind off of things. It’s like a healing power; it’s like a medicine to me, basically.

Alongside music, I wanted to do something in science, so I’m going to be doing a double major in neuroscience and music. I hope I can find a common ground later on, like music therapy or something similar to that. It’s hard to balance sometimes.

I’ve finally learned how to balance both, and I think music actually helps with my academics, too. It relaxes me, really. Even when I’m studying, I have to listen to something, or when I’m driving, I have to have music playing.

We’ll get back into music in a second, but what got you into neuroscience?
I’m just super into science, and I feel like I need to have science in my life. I was going to pick music at first, and then at some point I was going to leave music and just have it on the side but not pursue it, and then I thought why not maybe try both, because one helps the other.

How do you think that one helps the other?
Something with the brain; it’s just how it works. Like how music is affecting the brain. I feel like there’s a lot with the two of them. And music therapy is such a big thing. I think it’s just really awesome.

What are you interested in exploring with the intersection between neuroscience and music?
I’m not sure yet! I wanted to be a neurosurgeon after but then I figured that being a doctor and a musician at the same time is tough. I really want to be a performer and on the side be a doctor, if that’s possible.

If not, I need to find something that has both in it, like music therapy, because I like helping people as much as I can. I know when I came here music was a huge part of my healing process because it was super hard to start a new life here, and music is what helped me get through it all. I want to give back to the community with my music and help people heal themselves too, in a sense.

You must have had a strong music foundation in Syria if you started teaching yourself when you came to Colburn. What was your music background like there?
I started playing when I was four, and I was jumping between teachers. I had three teachers back there. My dad and mom are also musicians, my family in general, so they also helped me get through it when I came here.

I used to take theory when I was in Syria so I wasn’t super clueless about how to do it, so I just figured stuff out on my own until I found a teacher.

Do you think that music pedagogy in Syria is different than pedagogy here?
Yes. Back there, they’re not as strict. People do take lessons, but they’re not super into it, or sometimes they’re forced into taking music lessons.

Here you have a lot more opportunities to perform, to take more classes. They didn’t have really good schools like Colburn, and there are a lot more choices here. You’re never stuck to picking one thing and sticking to it. You have a lot of options.

Do you think that the culture of music in Los Angeles is also different along with the pedagogy, or is classical music what it is wherever you go?
I think it’s very similar. Classical music is the same everywhere. Back in Syria, they would also play Arabic music, depending on the instrument. There wasn’t much or many choices for violin for that type of music. But I think they’re similar wherever you go. It’s just that it’s much more advanced here, and there are a lot more options or opportunities.

So, the culture of classical music is the same but there’s more of it.
Yes. People put in a lot more effort here; they practice more. Over there it’s like … you’re playing but there’re just a few school recitals, and almost no competitions, summer festivals, or intensives. Here, music is studied on a deeper level, and there’s definitely a lot more to experiment with.

Does it push you further as a musician to have people around who are more serious about it as well?
Yeah. If I’m seeing that people around me are serious and are working hard, it makes me work harder. It gives a purpose to it, I feel. If people are just playing for whatever other reason, I won’t feel as motivated to work or push myself to do my best.

Why did you decide to study at Colburn?
My teacher was teaching here, so we looked into it, and I really liked the campus and the atmosphere and everything about it. It became my second home. I always look forward to coming here for lessons or for chamber or for orchestra. It’s a different mood away from school and all that stress. It’s super relaxing to me.

Were you studying at Colburn before you auditioned for the scholarship?
Yeah, it was my first year here, actually. I started in September of 2013, and in 2014 around April, I got the scholarship and added more classes. It was hard for my family to afford it at first with three kids. My sister also plays the violin and my brother is a pianist, so we were having trouble affording it.

When I got the scholarship, I was super excited to take more classes and do more with music. This I think was also part of the reason why I started loving music more.

What was the scholarship application process like?
Besides the age requirement, you have to be a hard worker. There are juries that happen every year, so that pushed me to work harder because I didn’t want to lose it.

At the time, I was still figuring myself out and trying to things out. I didn’t know what I wanted to do with music yet, but then when I got the scholarship, I realized that I’m not doing it for the sake of just playing. It was just for me and for enjoyment. That’s how I started working more.

What’s it like working with Henry Gronnier?
He’s an amazing teacher and a really good person. He’s helped me through a lot, and my family, too. I’ve improved a lot in a short amount of time, and that’s all thanks to him. Sometimes when you study with teachers, even though they might be great players, they can’t really teach, but he’s a great player and a great teacher at the same time. He’s done so much, and I’m so happy and thankful to be his student.

If you had to pick one thing, what’s the most important thing you’ve learned here?
After getting into Colburn, I realized that there’s a lot more to music than just practicing and performing. Like I said, it’s a healing power. It’s not a task to me anymore. I realized that two years after moving here, maybe after the first few recitals.

Are you hoping to teach in the future?
I was, but I don’t think so anymore. It’s more performing for me. It depends on what I wind up doing in the future but for now, I don’t really have it in mind.

I used to be really nervous actually, performing in front of audiences. During one of my performances, I blanked out, and it was really hard to pick up after that.

The first few recitals after that were really terrifying. After that, I realized that nothing’s going to happen. It’s about the process of enjoying it. It’s the playing that counts, not how many mistakes I made or if my intonation was good.

Is that what helped you overcome the performance anxiety?
Yeah. I just think that I’m playing music to enjoy it and to help others enjoy it with me. It’s about sharing that joy music brings.

Is there anything you would say to anyone in a situation similar to yours, who just had a massive, sudden, unexpected upheaval in their life?
I would say not to ever give up. I had a lot of negative thoughts at first, like how I’m not going to be able to do this, or nothing’s going to work out, especially with learning English; I almost gave up in the beginning. I didn’t want to be here.

Keep motivating yourself, keep pushing yourself to work hard and never give up, because you never know what the future will bring. The moments that make you want to give up is actually when you’re making the greatest improvements. There are so many opportunities, and if you don’t make use of them, you’re not going to get anywhere.