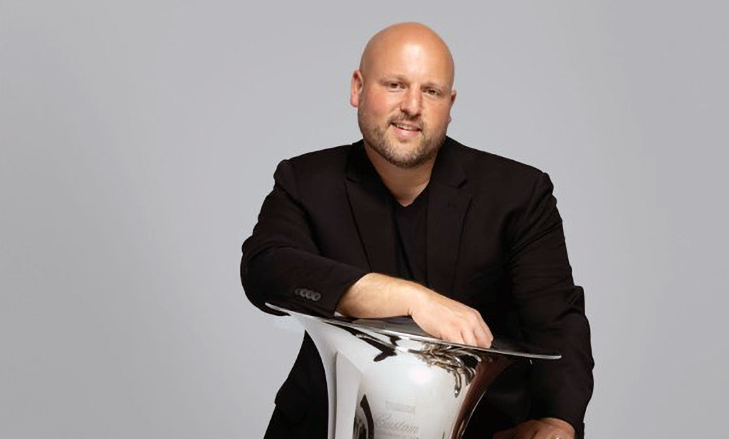 Auditions will be held on Tuesday, March 7, 2023 on the Colburn School campus. Applications and pre-screening recordings are due on Monday, February 6, 2023. Applicants are invited to submit approximately 8-10 minutes of repertoire of their choice, but Tindall specifies the following: recordings must have been made within the past year, and must include examples of contrabass tuba playing. Upon invitation, a more specific repertoire list will be sent to candidates chosen for the live audition. Please click here to apply; please click here for more information about the pre-screening video submission.

The Conservatory of Music and Music Academy are among the most important and selective global performance training programs for classical musicians. Graduates pursue careers at the highest levels of accomplishment as soloists, chamber musicians, orchestral musicians, conductors, and teachers. The small program size and unique resident faculty model create a tailored educational experience, allowing each student to  reach their fullest potential.

“Following a national search, we are thrilled to welcome Aaron Tindall to the Colburn School artist faculty of virtuoso performers and pedagogues,” said Conservatory of Music Dean Lee Cioppa. “As an acclaimed performer and teacher, Aaron has an impressive breadth of experience that will inspire not only his students, but also the broader Colburn School community.”

“I look forward to joining the Colburn School and its exceptionally talented community of students and faculty,” said Tindall. “I’m grateful for the opportunity to nurture students’ artistic and personal development, and be a part of Colburn’s tradition of excellence.”

With his orchestral playing praised as “a rock-solid foundation” and his solo playing described as being “remarkable for both its solid power and its delicacy,” Aaron Tindall is the principal tubist of the Naples Philharmonic, Sarasota Orchestra, and the associate professor of tuba and euphonium at the Frost School of Music, University of Miami. In the summers he teaches and performs at the Festival Napa Valley in Napa, CA and at the Eastern Music Festival in Greensboro, NC, where he also serves as Principal Tuba with the EMF Festival Orchestra under the direction of Gerard Schwarz.

Tindall has previously served as the acting principal tubist of the Iceland Symphony Orchestra, held the principal tuba position with the Aspen Festival Orchestra where he was an orchestral fellow, and has collaborated as guest tubist with orchestras such as the Teatro alla Scala Opera and Ballet Orchestra – Milan Italy, Melbourne Symphony Orchestra – Australia, Baltimore Symphony Orchestra, Cincinnati Symphony Orchestra, Colorado Symphony Orchestra, National Symphony Orchestra-Kennedy Center, New Jersey Symphony Orchestra, New World Symphony, Rochester Philharmonic Orchestra, and the Utah Symphony. He is a frequent soloist, guest artist/clinician, and orchestral tubist throughout the United States, Europe, and Asia. He has been featured at all of the International Tuba and Euphonium Conferences since 2006, performed in England with the National Champion Grimethorpe Colliery Brass Band, and his solo playing has been heard on NPR’s “Performance Today” radio show. Tindall has been a prizewinner of many competitions (solo & chamber) across the world. He has also been a two-time finalist in the prestigious Concert Artist Guild Competition, and released four highly acclaimed solo recordings; Yellowbird (solo tuba and jazz piano trio), Transformations (Winner of the International Tuba Euphonium Association’s Roger Bobo Excellence in Recording Award, and winner of two 2017 Global Music Awards), This is My House…(Awarded two 2015 Global Music Awards), and Songs of Ascent. His fifth album, At the Ballet, featuring the music of Prokofiev and Tchaikovsky will be recorded and released on the Bridge Record Label in 2023.

Many of his students have obtained prestigious playing positions with the top professional orchestras in the USA and Canada, and also in the premier military bands in Washington D.C. They are also frequent prizewinners at various national and international solo and chamber music competitions. Tindall is an International Yamaha Performing Artist, and a Denis Wick – London artist and design specialist, having recently designed their complete Ultra Range AT signature series tuba mouthpieces.

About the Colburn School

A performing arts institution located in the heart of Los Angeles, the Colburn School trains students from beginners to those about to embark on professional careers. The academic units of the School provide a complete spectrum of music and dance education united by a single philosophy: that all who desire to study music or dance should have access to top-level instruction.

Each year, more than 2,000 students from around the world come to Colburn to benefit from the renowned faculty, exceptional facilities, and focus on excellence that unites the community.

The Colburn Center, designed by Frank Gehry, is a 100,000 square-foot campus expansion expected to break ground in 2023 and to open in the fall of 2025. Located across the street from the School’s existing campus at the intersection of Olive and Second Streets, the Colburn Center will enable the School to expand its mission of presenting programs for the public. Gehry’s design includes Terri and Jerry Kohl Hall, a 1,000-seat in-the-round concert hall, four professional-sized dance studios, and a 100-seat flexible studio theater.