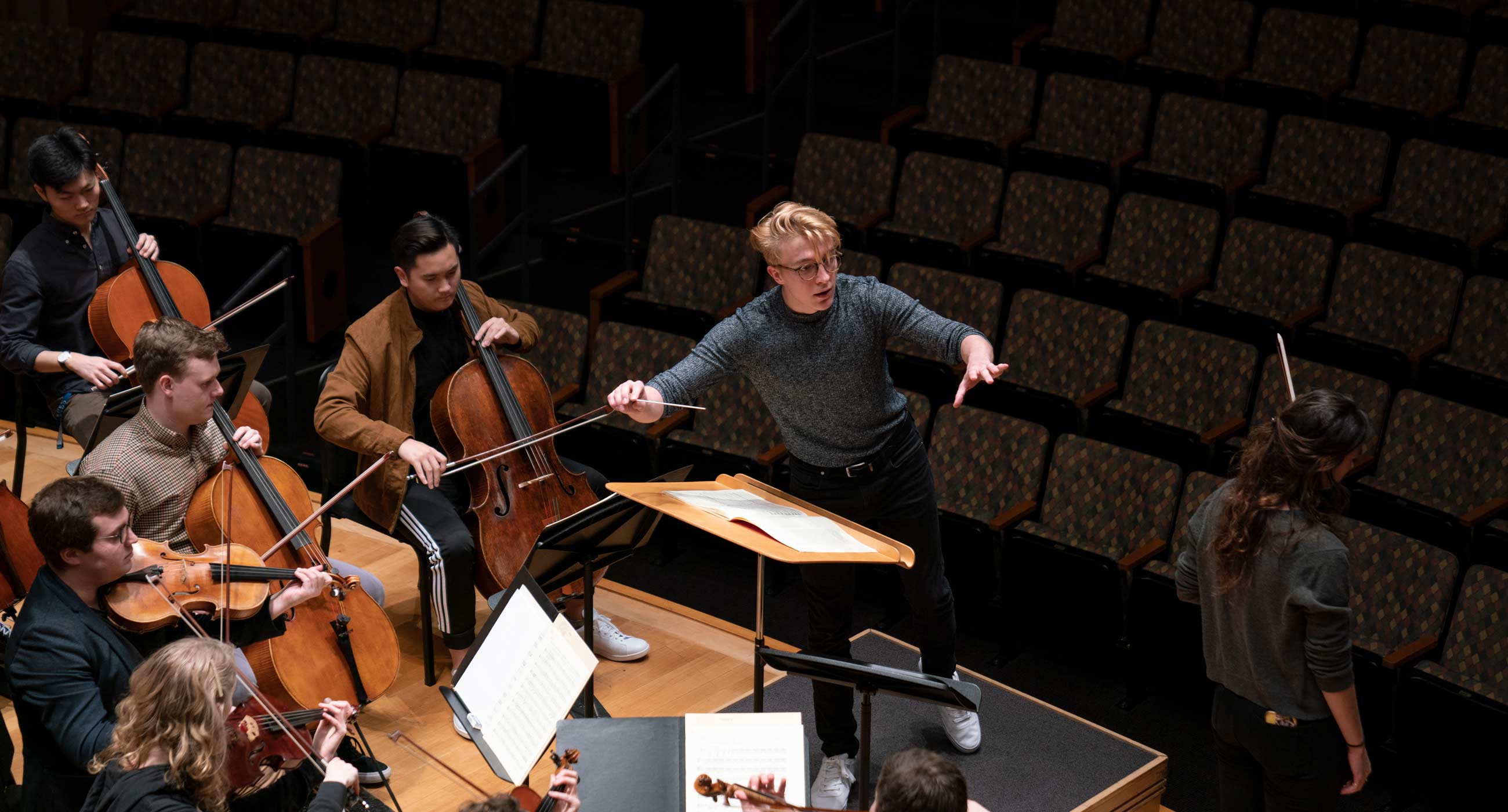 Ross Jamie Collins, a Salonen Fellow in the new Negaunee Conducting Program, rehearses with the Colburn Orchestra for the annual Concerto Forum.

Conservatory student Ross Jamie Collins, who is in his first year of Esa-Pekka Salonen’s Negaunee Conducting Program, recently went on tour with the Philharmonia Orchestra and made his conducting debut with the Colburn Orchestra on this semester’s Concerto Forum. We sat down with him to talk about building a relationship with an orchestra, working with friends, and what’s coming up next for him this year.

How did you end up at Colburn in the Negaunee Conducting Program?
Actually, it was quite funny, I was coming to the end of high school, and I didn’t know where to go. I saw an advert about Salonen’s new conducting program here at Colburn in Los Angeles, and I immediately knew that it would be unbelievable if I got to be a part of that. I sent my video out and went through the audition process, and I got lucky.

How’s it going so far?
It’s going really well. I love being here, the whole atmosphere, the passion towards music. It’s very stylistic. The program is more than what I thought it was going to be. It’s amazing how devoted people are to their instruments. I find it fun to be surrounded by people who know music; who understand music; and who all live, breathe, and feel the music. It’s brilliant.

What’s your background, and how did you decide to be a conductor?
I studied the cello and piano, and I was hoping to become a cellist. When I was 14, I met a young Finnish cellist-conductor Klaus Mäkelä through my violin maker-dad. I admired Klaus, and he taught me the basics. Klaus encouraged me to go to the great maestro Jorma Panula, who also taught Salonen. I studied in the Panula Academy for three years. Now I’m here; it all happened unbelievably fast.

You just finished your first semester in the program. What have you done so far?
I recently conducted Colburn’s Concerto Forum, where I had the opportunity to work with six Conservatory students performing a variety of concerti. That was a lot of fun. We put it together in such a short amount of time, in just three rehearsals, and you could really feel the energy and the effort people put into it.

Last semester I had the luxury of spending some time in London and touring with Salonen and the Philharmonia Orchestra around Europe. [Touring] is one of the core aspects of the program, which is awesome to say the least.

Obviously, Salonen is the main aspect, assisting him, getting feedback from him and studying with him, but I also find it really helpful to hear players’ feedback in such a high level orchestra, since they’ve done it for so long and are so experienced. It’s really helpful to gain their insight and their help on anything really; if it’s phrasing, conducting, the music itself, or how long you do your toast in the morning!

What were the rehearsals for that like?
It was actually quite amusing, most of the time we didn’t have a long rehearsal. On that kind of tour, it’s mainly just working on balance. They’re an orchestra that know their repertoire front to back. We would check the beginning, check the ending, and any spots Salonen deemed necessary.

You mentioned before that players gave you feedback. What kind of advice did you get from them?
My inner perfectionist is eager to learn, so I’m happy when people put in the time to give me a couple of words of advice about what to do and what I should focus on more. It’s really a lot of small tips that gather into one big understanding of how to handle a potentially 100-player orchestra. For example, how to communicate musical ideas clearly.

The connection between a conductor and orchestra can make the difference in a performance that takes it from being great to being unforgettable. With some conductors, you can see the amount of respect going each way, from the conductor to the orchestra and back. I’d say it’s one of the more crucial elements of conducting.

During each season, we have guest conductors for our Colburn Orchestra concerts. How do you build that relationship with an orchestra in such a short period of time?
It’s definitely hard. Orchestra players often say they can tell in the first five minutes if it’s going to be a good week or a bad week.

At the first rehearsal, there can be a little bit of tension, and overcoming that to start building a relationship is part of the gig. Everyone we’ve had so far has been more than amazing at controlling that situation at Colburn, and that’s what makes them professionals.

How did you deal with that for last week’s Concerto Forum? Did it help that you were conducting your peers in the Conservatory?
It’s different for everyone. Some people find it’s really nice to conduct friends and some find that it’s easier to conduct complete strangers. I try to find the best of both worlds.

I love to conduct my friends because there’s not that much tension, as you already know the players and the players know you on a personal level. It’s fun making music with my friends and getting to perform with them as an orchestra.

How did Concerto Forum go overall?
It was great; I loved it! I had a lot of fun and I hope the players did as well. The soloists were all absolutely amazing. Some of the time I was standing there conducting, and I was just blown away. I didn’t want to stop.

It was really nice working with soloists and working with new people on stuff that I haven’t conducted. It was all relatively new repertoire for me.

How did you prepare the music for that experience?
Definitely studying the scores and listening to the music a lot.

Talking to the soloist helps too, knowing what they’re doing before the first rehearsal and how they’re going to phrase a certain passage, and identifying the most crucial aspects of the music and how to take care of it.

What else do you have coming up this semester?
This week, I am prepping the Colburn Orchestra for Rossen Milanov. He’s coming to do Debussy’s Ibéria, Missy Mazzoli’s Sinfonia (for Orbiting Spheres) and Beethoven’s Violin Concerto with Gallia Kastner playing the violin solo. I have a wind sectional tomorrow and a full orchestra rehearsal on Friday.

I am looking forward to that a lot, can’t wait. It’s going to be very cool standing up there with pretty much the whole school sitting in front of you.

Later on in the semester, we’re also prepping for Peter Oundjian with Dvořák, Séjourné, and Kodály.

And possibly the most exciting thing about this spring, which I am eagerly waiting for, is the gala concert in mid-April with Marin Alsop. We’re doing Strauss’s Der Rosenkavalier Suite and Bartók’s Concerto for Orchestra.

Salonen is coming to LA in a week to conduct the LA Phil, so I’m going to be observing those rehearsals, learning from him, and studying with him as much as possible.

In March, I’m going to England to spend some time with the Philharmonia and Salonen. They have an exciting full Beethoven concert coming up, as well as a small tour of Denmark, Germany, Belgium, and France. I’m looking forward to that.

Do you mostly prep the Colburn Orchestra before the guest conductors come?
Yes, we do the wind sectional and the first full orchestra rehearsal before guest conductors then come in. When they are here, then we assist them, check balance, and pretty much anything they need us to do.

What do you hope to do after graduating in a few years?
I hope that there’s an opening in the musical world for me by that time. I’d love to work with great musicians and get to conduct some big orchestras one day.

As a new conductor, what kind of mark would you want to make on the classical music world?
I want to inspire people. I aspire for my conducting to excite the musicians I’m with to play with passion. And hopefully through inspiring the musicians, I can inspire an audience in the same way.

As far as changing the classical world, I would want to make it more accessible and inviting to a young audience like myself. It would be the best thing ever if someone came up to me and said, “Oh, by the way, I started playing an instrument because of your music.”