Symphonic Homecomings at The Soraya 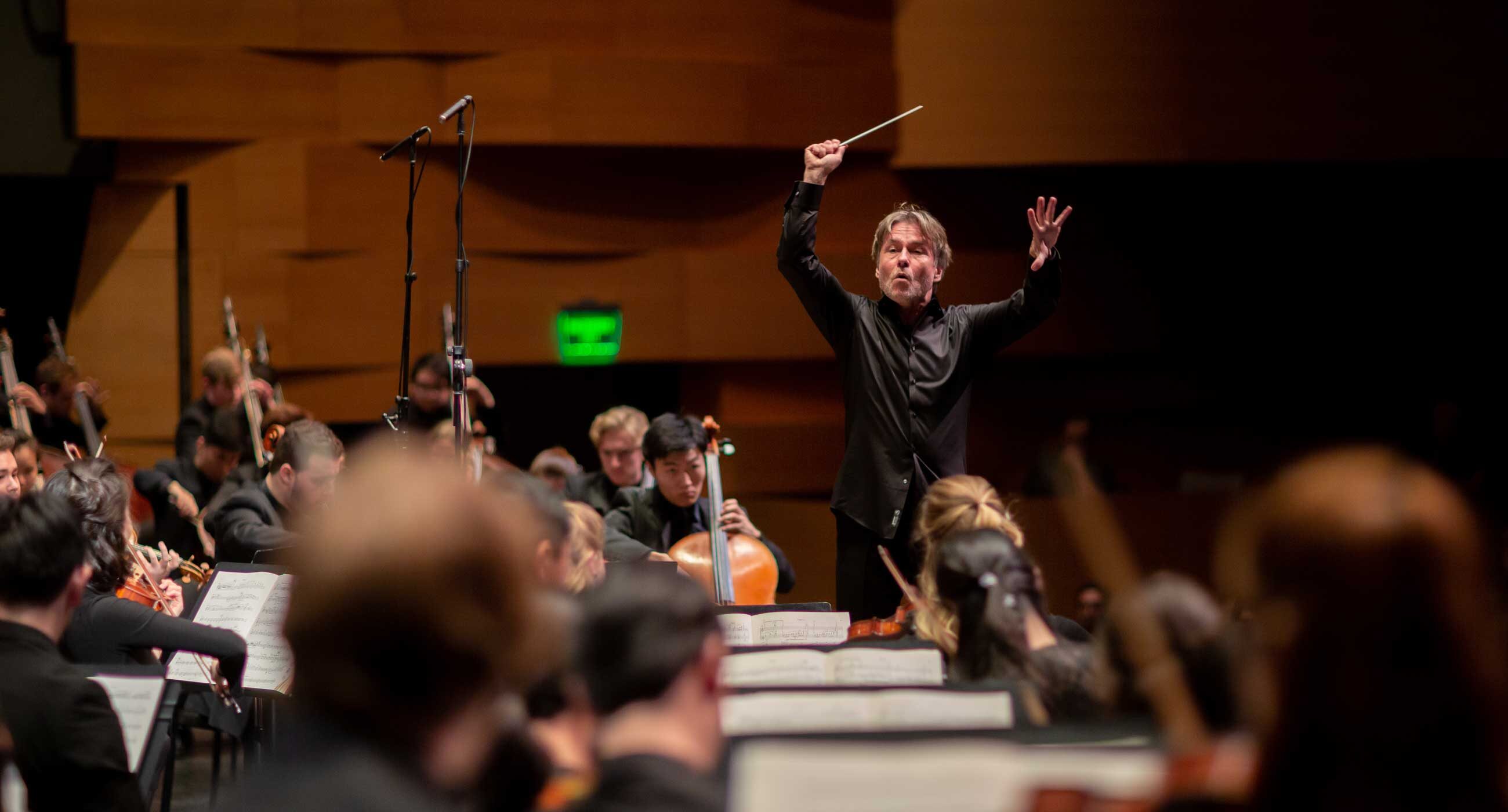 On Saturday, November 13, Esa-Pekka Salonen will conduct the Colburn Orchestra with soloist Hao Zhou, Violin (MM ’21). This article was originally published on thesoraya.org.

Esa-Pekka Salonen, a classical-music superstar who led the Los Angeles Philharmonic from 1992 to 2009 and is the newly appointed music director of San Francisco Symphony, will soon take to the stage in his third appearance at The Soraya. On Saturday, November 13, Salonen will guest-conduct the Colburn Orchestra in a weighty evening of music. The concert, offered free to the public, promises a welcome reunion for Soraya patrons with live symphonic sound—for the first time in over a year and a half.

The ever-youthful Salonen, who is deeply committed to music education, provides a stimulating tutor and role model for the Colburn’s pre-professional musicians. After completing more than a dozen concerts in San Francisco this fall, he will hold rehearsals at the renowned academy in downtown Los Angeles for the ambitious program slated for The Soraya, a double-header of vast and panoramic works: Shostakovich’s Violin Concerto No. 1 and Bruckner’s Symphony No. 6.

“Esa-Pekka is quite strict,” says the Colburn Orchestra’s longtime music director Yehuda Gilad, adding that, “I love it. It’s the old way … he doesn’t let anything get by.” For the student players to perform these epic scores, Gilad supervises a careful plan in which they work individually on their parts with their teachers, break into sectional rehearsals, and then reassemble the music in a “rough state, perhaps utilizing one of the assistant conductors,” he explains.

“When Salonen arrives, he usually gets started by reading through the music from beginning to end, or to the end of a movement. Then he dissects. If there are issues, he works on solutions. And he does not conduct them like students, imparting his wisdom. He just says, ‘Let’s do this. It will accomplish this and this and this.'”

Bruckner’s Sixth Symphony, written in 1881, is among the composer’s most immediately enjoyable works. Salonen’s refreshingly urgent take on it was described by Mark Swed in the Los Angeles Times, as “rooted in sheer joyous ecstasy.” The Austrian composer’s hour-long Sixth, with the first movement’s iconic opening triplets, the majesty of white-hot brass, great slow movement, magical colors of the Trio, and grandeur of the Finale, has been an important oeuvre in Salonen’s development as a conductor. His performance in 2008 while music director of the LA Phil showed, as Swed wrote, that Salonen “has absorbed Bruckner into his own thinking.” After his performance with the Finnish Radio Symphony Orchestra in 2019, music critic Jari Kallio wrote that Salonen “unleashed a tremendous burst of symphonic energy in the finale, with the hall of the Helsinki Music Centre vibrating with sonic joy.”

Gilad points out that the Colburn Orchestra concerts at The Soraya reflect what the school has been about, emphasizing a balance of solo, chamber music and orchestra. “We only do six or seven concerts a year so for them to do a major work like the Bruckner with one of its foremost proponents is going to be fantastic.”

Shostakovich’s First Violin Concerto, written in 1948 when the composer was under great political duress, requires genius bow control and left-hand dexterity; a wide range of tone colors; and a sense of sardonic Russian soul. Hometown-hero Hao Zhou, who entered Colburn’s Community School at just thirteen years old, will solo in the work.

According to Lee Cioppa, the Dean of Colburn’s Conservatory, Hao was slated to play the Shostakovich last year when he was still a student. “The performance cancellation due to COVID was devastating for him, as it was for the whole orchestra,” she said, “so it was really important that we could offer him that same opportunity, even though he has since graduated. It makes his appearance on the re-opening even more of a celebration.”

Contacted by email after a prestigious tour with his Viano String Quartet, traversing Heidelberg, Hanover, Cologne, Budapest and Zurich, Hao said it was going to be “an absolute thrill to return. When I was a student, my most memorable performance in the Orchestra was when Maestro Salonen led Richard Strauss’s Also sprach Zarathustra at The Soraya. It will be an honor to perform the Shostakovich with him as well as with my brilliant colleagues in the orchestra. I’m looking forward to coming home!”

That evening was memorable for Cioppa as well. “When we did the big Strauss program with Esa-Pekka two years ago at the Soraya,” she recalls, “it was amazing to hear them play these incredibly difficult, difficult works and hear every note so well.”

The Soraya’s 10th anniversary season for which the Colburn Orchestra was long since booked “had been planned as a homecoming for beloved and familiar artists who once graced our stage,” according to The Soraya’s Executive Director Thor Steingraber. “Reopening The Soraya,” says Steingraber, “is more than lighting the lights and unlocking the doors. It’s our invitation to open hearts, minds, eyes, and ears.”

Read the original article on thesoraya.org

Hao Zhou plays on a 1783 Gagliani Violin on generous loan from the Aftergood Family.