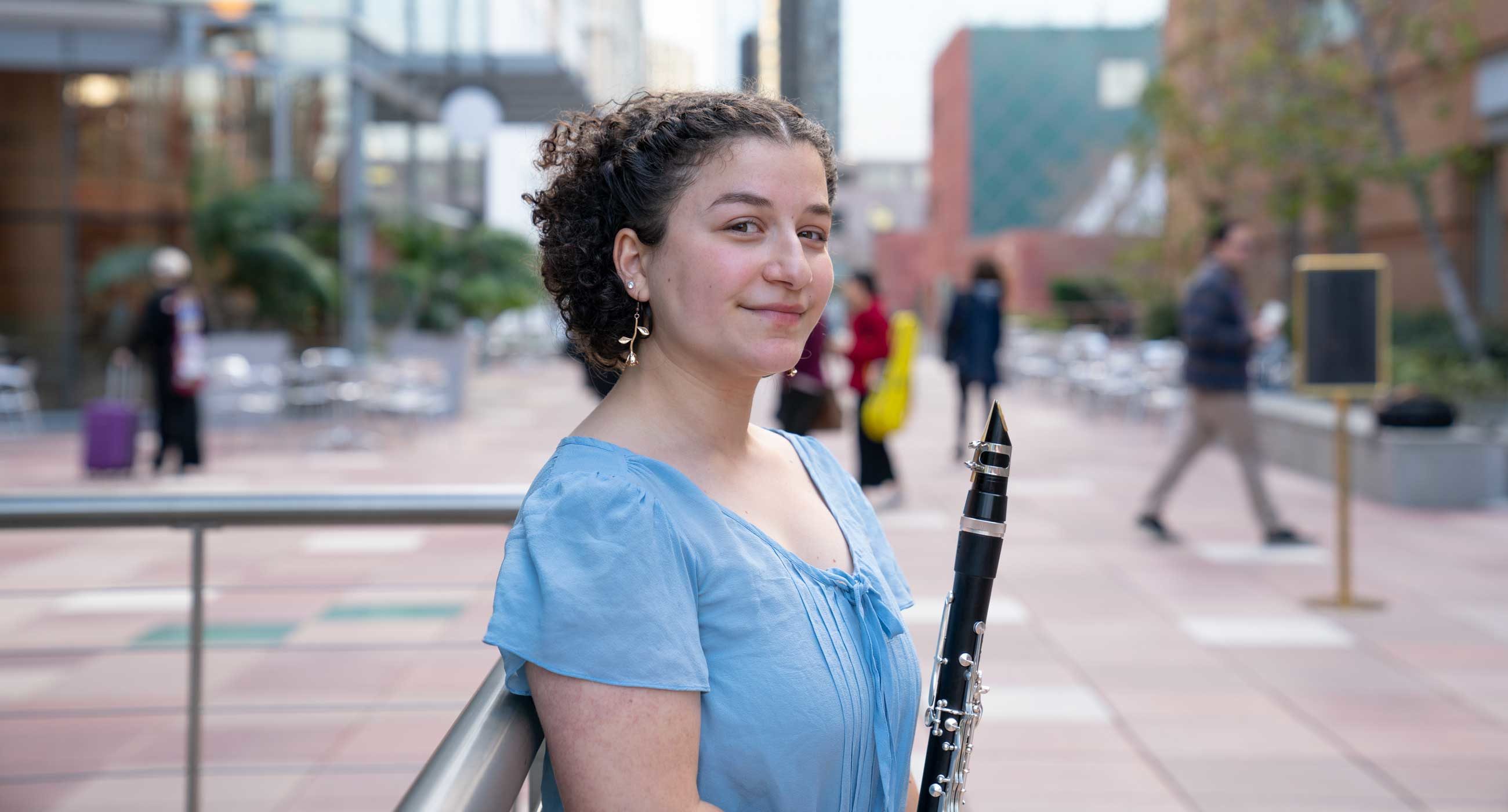 Anoush Pogossian, 17, studies clarinet with Michael Yoshimi. She is from Glendale, California and has been at Colburn for four years.

What is your musical background and how did you start playing clarinet?
My parents are both professional violinists and my siblings have both been playing music since I can remember. I actually started out on violin when I was around seven years old, but in the fourth grade, my best friend and I decided to start playing clarinet.

At my elementary school, they had a program where the older students showcased different instruments and you could choose to rent one out and attend little weekly rehearsals and group classes. So that’s what we did. And the way my mom puts it is that I came home one day with a box and said, “I’m playing clarinet now.” I guess that stuck.

Why do you like the clarinet?
I think it’s a way for me to sing because I don’t really have a good singing voice, but I always feel the urge to sing. So the clarinet is a good way for me to do that without making everyone’s ears bleed as much as they would from my voice.

How is it different from the violin?
With the clarinet, I think maybe it’s just the act of blowing air—where I feel like if I’m breathing as a part of the music, since it’s not an option on clarinet, I get to connect with it on a more natural level. I feel like I’m part of the instrument and music comes as a result of that connection rather than me just playing notes.

You mentioned that your parents are both professional musicians. How did that play into your relationship with music?
I think my relationship with music is something that I never really questioned or ever chose. It’s just another language that we kind of spoke in the household. And it’s something that I don’t think I could ever let go of because it is that personal to me. It’s tied to the experiences I had growing up.

What was the piece you chose to perform for this?
It’s the second movement of the Stravinsky Three Pieces for Solo Clarinet, and it’s notorious for having a lot of difficult passages because Stravinsky was very clear with what he wrote in the music.

It can be hard to try and not phrase actually, because you want it to be kind of rigid and robotic when it’s notated to be that way. And there’s a small section in the middle where you can sing, but for the rest he has very strict markings so it’s very difficult to try and stick to them. Yeah, and of course the notes aren’t any fun either.

What kind of music do you like to play the most?
Classical, but I’ve also been really getting into contemporary music, more modern things. The past couple of years I’ve been much more interested in that and have actually had the chance of premiering music.

How did you get into that?
It’s through the Yellow Barn’s Young Artists program, which I’ve gone to the past two summers. Part of the program is to work with composers your age and work side by side to premiere their pieces. I think that’s just as important as studying already existing repertoire.

It teaches me a lot about playing and how to approach existing repertoire. It’s also just exciting to get to work with composers and really make their pieces your own.

How did you bring that knowledge back to your classical studies?
I think it gives me some perspective on how to approach the music. Like each note I’m seeing, I try to see it as though I don’t know what’s coming next. It almost makes it feel like I’m writing the music.

I’m thinking “why would I put this particular note there? Why is it phrased a certain way? Why is this slur mark here and not over there?” It makes me question the little things that I wouldn’t notice before, and it drives me insane, but it’s a lot of fun.

What has it been like at Colburn the last four years?
It’s been really great. Something that I really like about the Community School is that there is a lot of flexibility. I get to kind of pick and choose different ensembles I want to be a part of, and I of course love taking lessons with my teacher, Michael Yoshimi. He’s been incredible to work with over the past three and a half years.

I participated in [Colburn Youth Orchestra] for a while and that was great, since I really enjoy playing in an orchestra. And I’m now in the Honors Chamber program in the [Ed and Mari Edelman] Chamber Music Institute. I love my group, and I’m really glad that I have the opportunity to do that here.

How do you think Colburn has contributed to your musical education?
The obvious answer is my teacher, Mr. Yoshimi. He’s the reason I’m here. I owe him a lot for the dedication and time that he’s put into my musical education and development. He really goes out of the way for his students—he records for us and he’s always there to answer our questions and help with our problems, and I’ve just been so fortunate to study with him during these past three and a half years. I feel like we really understand one another now and lessons are getting more and more productive as we keep working together.

Are you new to the Honors Chamber program?
This is my first year, but it’s been great. I love chamber music so much, and I really love my group. Chamber music was kind of my first introduction to playing when I had just started on the violin, and it’s something I get to do at Yellow Barn, and now it’s wonderful that I can do it here.

What’s different about this chamber group versus other ones you’ve played with?
Whenever I have other chamber groups, it’s in a very condensed amount of time. Like at Yellow Barn, we’ll have maybe 10 days to put together a piece. At other festivals, you just meet when you can.

But here it’s been really interesting to have rehearsals and coachings every week and see throughout the semester how our pieces change. So that’s been something that’s really nice, kind of letting what we do on the weekend marinate—we don’t have to rush to get it done for a concert that’s in two days. We have a lot more time to make the pieces our own. That’s something new that’s been really eye-opening.

You have a very impressive resume. What’s the most meaningful or exciting thing that you’ve done recently?
I was in the National Youth Orchestra this past summer, and we toured throughout Europe with Sir Antonio Pappano playing Strauss’s Alpine Symphony and Prokofiev’s Symphony No. 5.

I still sometimes have a hard time believing it happened. I’ll look at the video of us playing at the BBC Proms, and I’ll think, “wait, that’s me. How did that happen?” It was just incredibly surreal.

That particular concert really stood out for me, because growing up in music, you constantly see videos of the Proms. You have that image in your head from different recordings on YouTube, so actually getting to perform on that very stage was just mind-blowing. Afterwards, I had to take a moment to stand there and look around me and just really appreciate the opportunity to be there.

What do you hope to do with your music in the future?
That’s something I’ve been thinking about a lot with college applications and everything. I think I wouldn’t just want to perform since I’m excited to explore how music can fit into other areas of interest. Something I’ve had a lot of fun with is trying to bridge the gap between music and psychology and studying how they work with one another. Studying psychology in depth really helped me with my performance anxiety and how I think about and approach music.

I’ve been involved with Music for Food for the past few years, for example, and I think the music has had much more purpose when I’ve performed through that rather than when I’ve just performed in a recital or something. With Music for Food, people will throw dollar bills in a violin case in front of us while we’re playing, but all of that money goes to food shelters. That’s been much more rewarding than any competition or video on YouTube.

I think more people should be asking, “how can we use this craft that we’ve all gotten to know and love to help other people?” People are starting to ask it more, like with the start of Street Symphony and how much Music for Food has grown in the past 10 years. And I think there are a lot of people who are asking that question, but I think the big organizations who already have power in the classical music field should be asking it too. 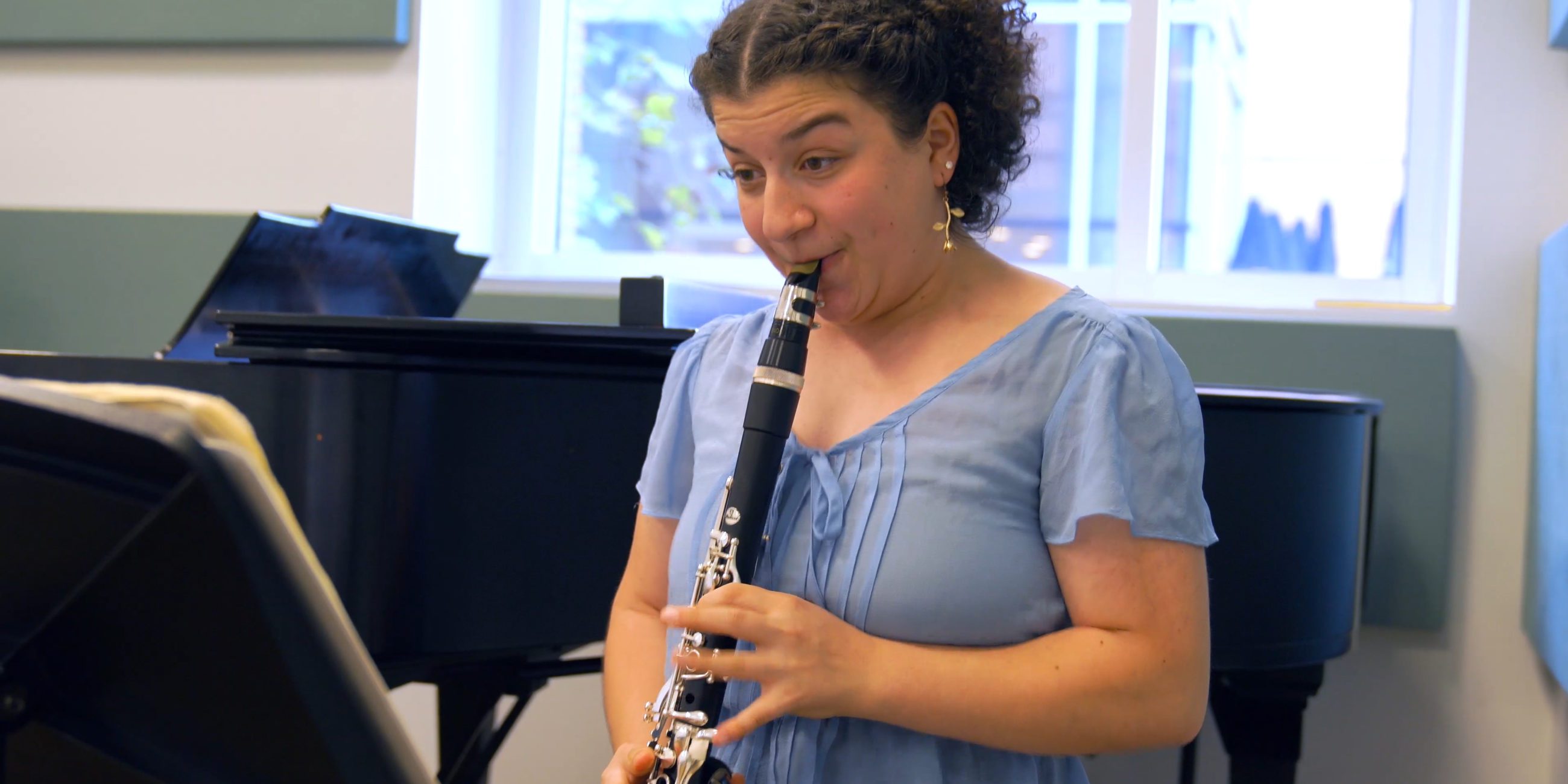